I’ve heard it a million times: “Individual investors can’t beat the market, so they shouldn’t even bother trying.” Or, “The stock market is too risky.” Or my personal favorite, straight from the comments section of a recent Wall Street Journal article on how to teach your children about investing: “[S]tay out of the stock market it is rigged against you.”

It can be different
While I do get that there’s trepidation on the part of many who have been burned by the market before, it doesn’t have to be that way. In fact, I’m teaching my 8- and 7-year-old daughters how to invest, and they’re getting a big kick out of it. They’ve been investing for over a year now, and as it stands they’re beating the market by more than 5.5 percentage points! Forget investing wisely; I’m talking about investing Foolishly.

Of course, I play a role in helping my girls choose what stocks they want to buy. But they make the final call. We talk about the various companies that play roles in our lives and we consider the ones that they would feel good about owning essentially indefinitely. I give them a list of four finalists based on conversations we have together and they come to an agreement and make the pick. Then we buy. And then we get on with life.

Oh, to be young again
The beauty of starting them at this age is that their interest and knowledge is in fact limited, which means they’re never incessantly twiddling their thumbs over an earnings miss or why same-store sales are down. They don’t care! They just think it’s cool that they’re part-owners of these businesses that play a part in our everyday lives. Take a look at their portfolio holdings and it starts to make sense:

It’s all about perspective
Of all the great investing advice I’ve gotten in my life, it all comes back to this: If you want to be an investor and truly maximize your chances of growing your wealth significantly over time, then you need to see yourself as a part-owner of the business(es) in which you are investing and proceed accordingly. You need to be thinking about the future. Not next week or next quarter. I’m talking years. It’s not perfect by any means, but investing with this mentality can yield some impressive results. Consider how all five of these companies have fared over the last seven years in relation to the S&P 500: 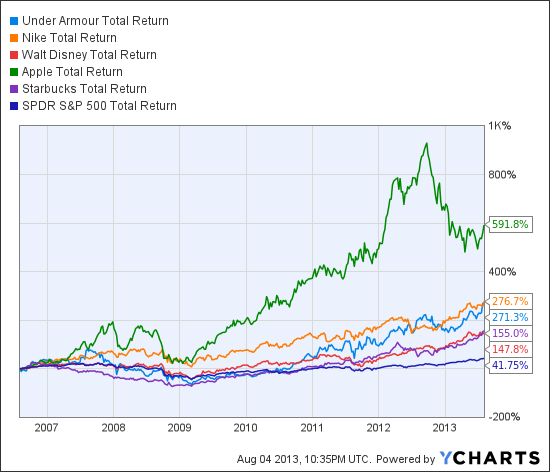 Of course, the past doesn’t predict the future. But by the same token, there are good reasons these companies’ stock prices have done so well over the course of time. And if there’s one thing Foolish investing has taught me, it’s that many of the winners tend to keep winning over time. So when you find those winners, well, you need to hitch your wagon to those stars and enjoy the ride.

The Foolish bottom line
I don’t believe for a second that the stock market is a rigged, untenable game. I’m convinced the folks who do are the ones who need our Foolish advice the most. I’m sure I’ll continue to hear people say that the stock market is too risky, and that’s a shame. The truth of the matter is, the greater risk is not learning how to invest Foolishly and being a part of it.

The article The Greatest Piece of Investing Advice I’ve Ever Gotten originally appeared on Fool.com.