Google Inc (NASDAQ:GOOG)’s talent has upended Apple Inc. (NASDAQ:AAPL). In 2011, Siri was introduced with much fanfare, dubbed the first A/I with personality, and was a momentary cult hit with the public and fanboys alike. Eric Jackson penned a column for Forbes on October 28, 2011, stating that Apple Inc. (NASDAQ:AAPL)’s Siriwould be “a Google killer.”

According to Jackson, there were five reasons Siri posed a Sirious (intentional misspell) threat to Google Inc (NASDAQ:GOOG) at the time.

1). It was the first voice recognition system that actually worked, and at the time was still in “beta.”
2). Siri has personality, and we would come to view Siri as our friend.
3). Siri is hard to copy, and blends art with artificial intelligence.
4). Siri helps own the customer experience for Apple Inc. (NASDAQ:AAPL). Jackson predicted that the future iTV would use Siri as the primary input.
5). Siri will improve over the next two years with all the data it’s amassing.
6). “When Siri opens up its API to 3rd party developers, this thing’s growth and adoption will go ballistic.” 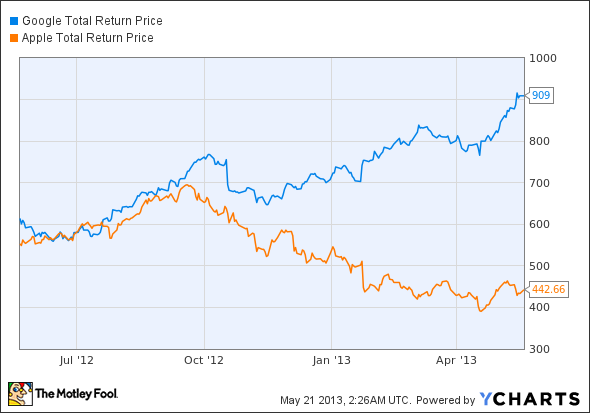 1). When Siri came out, there wasn’t anything else like it. It was cool. I played with it, and enjoyed it. It didn’t work perfectly, but still… As a Google Inc (NASDAQ:GOOG) investor, I was worried that all Jackson said might come to pass.
2). Siri did have personality, and gave clever answers that amused everyone. However, today, a funny but incompetent assistant is quickly fired.
3). Siri was indeed hard to copy. Google Inc (NASDAQ:GOOG) took a long time to respond, and probably put an incredible number of man hours into creating Google Now. Various Android prediction websites repeatedly reported delays in the launch date of Google Inc (NASDAQ:GOOG)’s own assistant. But, Google has responded, and to this point, bested Siri. The company’s voice recognition is second to none, and has steadily improved. Many people, even devout Apple Inc. (NASDAQ:AAPL) fans, claim that Siri still doesn’t work very well, but I trust Google to decipher my dictated texts, often without double-checking them.
4). There is no doubt that Siri will be the interface for the iTV, and a variety of future hardware products. Also, there is no doubt that Google’s assistant is already being used in the same way that Jackson predicted Siri would. I can create an appointment using my voice with Google (much like I can using Siri), but with a greater success rate.
5). Siri hasn’t improved as much as iPhone users and shareholders would like. Scott Forstall, credited with iOS and who helped develop Siri after Apple Inc. (NASDAQ:AAPL)’s acquisition of the company, is gone, largely due to the Apple Maps debacle; Google Maps on your iPhone, anyone

There’s a great column here, by Jay Yarow of Business Insider, about why CEO, Tim Cook, let Forstall go, which should give you insight into how Cook wants to run the company.

Jackson stated, “when developers write Siri-enabled scripts that tie into their websites – like Yelp Inc (NYSE:YELP), OpenTable, and others? Siri will become even smarter. For users, it will become even more valuable because better and better data results will come back to it.” Google countered this by buying Zagat, among other acquisitions, and continues its torrid pace of development.

Not coincidentally, Yelp Inc (NYSE:YELP) has been a long-rumored takeover target, and quoting my Foolish collegue, Sal Mattera, the company has been identified as a possible take over target by Yahoo! Inc. (NASDAQ:YHOO). “Yelp is a key player in local. It has a large user base that rates and recommends local businesses, and a sales team that works directly with many of them. Google acquired Yelp’s competitor Zagat in 2011, and has begun to integrate Zagat’s ratings into its services, particularly its map application.” I tend to agree that it is a likely acquisition for all the data sharks out there.