There was a time when bullish notes on Apple Inc. (NASDAQ:AAPL) didn’t seem to catch a break, but after the first-quarter earnings; the entire social media is now littered with all the investors’ pessimism and analysts’ downbeat reviews that one can think of. Despite the potential future earnings power, a solid dividend, and Apple’s ability to innovate, shares are trading near 52 week low. Investors seem to be on an emotional roller-coaster ride, with some suggesting that Apple Inc. (NASDAQ:AAPL) growth story is over, while some proclaim that this discount afforded by the post-earnings sell off is a once in a lifetime opportunity.

Moreover, Microsoft Windows 8 has now entered the smartphone software market; and with a recent collaboration with Nokia Corporation (ADR) (NYSE:NOK), Microsoft Corporation (NASDAQ:MSFT)’s Windows 8 will be able to get improved hardware support and is expected to give strong competition to Apple iOS and Google’s Android. Nokia Corporation (ADR) (NYSE:NOK)itself is under immense pressure as the Finnish firm’s near term goal is to at least survive in the smartphone territory that, at the moment, is dominated by Apple Inc. (NASDAQ:AAPL) and Samsung handsets.

There are also questions about whether China Mobile Ltd. (ADR) (NYSE:CHL) and Apple will agree on an iPhone deal or not. Many analysts have suggested that China Mobile, the world’s largest cellular provider by subscribers, won’t be inking a licensing deal with Apple on the iPhone 5 anytime soon. There’re also fears of the iPad-mini cannibalizing iPad sales, and the future exacerbation of margins from a possibly lower cost iPhone.

First, investors need to focus on Apple Inc. (NASDAQ:AAPL) as emotionless as possible. The company has a big market base; millions of people still use iPhones, iPads, and iPods. Fears of market saturation and slowing growth are nothing but over exaggeration — analysts still expect the company’s sales to grow over 15% this year. I believe Apple, like always, will adapt to competition very quickly.

Apple Inc. (NASDAQ:AAPL) currently has almost $150 in cash per share — almost one third of the current price per share. Shares currently trade at 10 times trailing earnings and 6.8 times trailing EBITDA —  the lowest since the financial crisis of 2008. 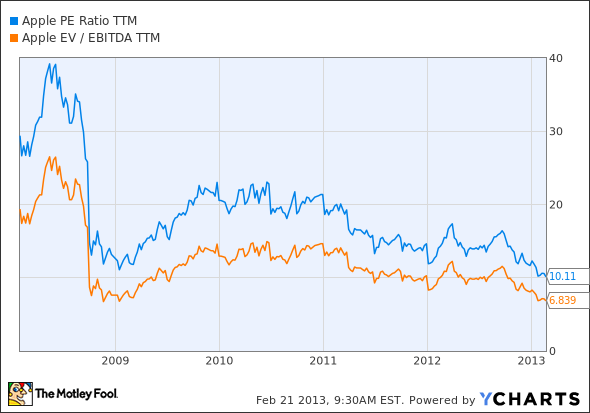