Open Square Capital, a young asset manager with thematic long-term investment approach, recently released its Q1 2019 Investor Letter – a copy of which you can download here. Among other things in the letter, such as the fund quarterly performance – a gain of 44.35%, it also disclosed its thorough analysis of the stock that amasses 15% of its portfolio, Apple Inc. (NASDAQ:AAPL). In short, the fund strongly believes in the company’s future growth and expects a lot from its services sector which has just being to develop. Namely, last year Apple’s services brought back $37 billion, which represents 14% of the total company’s revenues, and Open Square Capital a greater potential.

“We last discussed Apple in our 2017 Q1 letter. Since it’s been two years, let’s provide you with an update. As background, we’ve owned Apple shares since the fund’s inception nearly 3.5 years ago. At the time, Apple was trading at ~$116/share, and today it’s selling for about ~$200/share. Along the way, we’ve collected $9.28/share in dividends, and remarkably total share count has shrunk by over 17%, falling by almost 1B shares to 4.77B shares. With fewer shares, we’re now enjoying a bigger slice of Apple’s earnings pie. Apple comprises about 15% of our portfolio, and we’ve maintained that weighting fairly consistently. Our baseline investment thesis remains unchanged:

2)Monetization of the ecosystem via broadening and deepening of Apple Services;

5)Free optionality on numerous tangential themes in other industries, including healthcare, entertainment, vehicles and media; and

The company’s size and success hasn’t insulated its shares from short-term volatility. Within the past year, Apple’s shares have reached $230/share and fallen to $142/shares. Much of the concerns today centers on slowing iPhones sales worldwide, market competition, challenges in India, and even general apathy. For us, we’ve always maintained that iPhone sales will slow as Apple has already dominated the high-end handset market. Further growth is more difficult to come by as Apple has intentionally sought to maximize profits and not market share.

In the next few years, we anticipate the wider availability of faster 5G wireless service will catalyze a large upgrade cycle, but until then, iPhone/hardware sales will ebb and flow as the upgrade cycles play out. Even a mature market, however, translates to tremendous recurring profits as people will naturally replace their iOS devices with more current versions when their devices break, degrade, etc. Additionally, slower growth is still growth, and a stable and growing base of iOS users means the ecosystem becomes a riper asset to monetize.

Apple’s deliberate focus on the high-end market gives its ecosystem a tremendous advantage today. By focusing on the well-heeled or those willing to spend more, Apple’s 1.4B users outspend their Android counterparts by almost 4:1 for services. Take a moment to appreciate that. Although two people can own arguably the same advanced smartphone, one will spend 4 times more for services in their ecosystem. So if you’re a developer, producer, or media executive, can you afford not to play in the iOS ecosystem? For most product developers, the answer is no, and thus Apple becomes your digital Les Clefs d’Or concierge, a high-end guide that curates, recommends and provides you with access to an ever expanding digital world, but one that values your privacy and exercises discretion while doing so.

For Apple the next 5 years of growth will come from monetizing this ecosystem, which is why we believe this company is on the cusp of a major transition/expansion into new industries. Such an endeavor would normally be fraught with risk for other companies, but Apple already has a devoted following, and most of the services introduced are ancillary to its business and an evolution of its offerings.

It’s taken a few years, but the transition is now beginning as the baton for future growth is passed from hardware to services. Although iPhone sales still represent the lion’s share of Apple’s total revenues (>60%), services has steadily gained traction. In 2018, services generated more than $37B, or about 14% of Apple’s total revenues (i.e., 1/4 the size of iPhone’s revenues).

Despite its smaller size, Apple’s Services packs twice the punch. Given how easily services scale (i.e., adding a new subscriber to Apple Music doesn’t increase costs materially), this segment is almost twice as profitable as hardware sales. In its most recent report, the company revealed for the first time that Apple Services had margins of ~63% vs. ~34% for Apple’s hardware products. Thus, as services revenue grows faster than hardware sales, we anticipate Apple’s overall margins to improve. So not only will Apple begin to grow top line sales, but concurrently expand bottom line margins, an unusual feat given a $940B company.

Currently, about half of Apple’s services revenue comes from the App Store and Google’s Traffic Acquisition Costs (“TAC”) payments (i.e., every time you search for something using Siri or Apple’s search bar, it routes that query to Google). In CY 2018, TAC payments totaled ~$9.5B, and we anticipate it will grow at >25% for the next few years. Similarly the App Store should grow around 15% a year for the next few years. So with these two core drivers, services revenue has a clear path to grow to $50B in the next two years. After that? It’ll be up to Apple’s newest offerings.

At a recent presentation held on March 25th, the company unveiled a host of products in entertainment (Apple TV App and Apple TV+), news (Apple News+), video games (Apple Arcade) and financial services (Apple Card). We’ve categorized them in the following manner to give you an idea for how we think about these services: 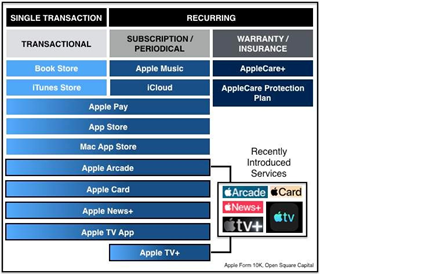 it will grow at >25% for the next few years. Similarly the App Store should grow around 15% a year for the next few years. So with these two core drivers, services revenue has a clear path to grow to $50B in the next two years. After that? It’ll be up to Apple’s newest offerings. ShowtimeAt a recent presentation held on March 25th, the company unveiled a host of products in entertainment (Apple TV App and Apple TV+), news (Apple News+), video games (Apple Arcade) and financial services (Apple Card). We’ve categorized them in the following manner to give you an idea for how we think about these services:You’ll notice that as Apple builds out its offerings, the focus shifts from singular transactions to generating recurring revenue in large markets. Some of the markets will certainly be more challenging to penetrate. For instance, Apple TV+, Apple’s new streaming service available in the fall, will encounter stiff competition against entrenched rivals and upstarts such as Hulu, Disney+, Netflix, Amazon Prime, and HBO. The streaming video on demand space isn’t exactly a green space. Much of its success will depend on the quality and popularity of its programming. Nevertheless if Apple Music was able to become the #1 streaming music service in the US since its launch only three years ago, it bodes well for how quickly/willing Apple’s users are to adopt a new service. We’ve made a few projections based on what these categories could generate, but it’s early days, so we’ll firm those numbers up once launched.

While it’s great that Apple will provide more entertainment options to us, we’re more intrigued by how the company is increasingly retaining its customers, and among the five announced offerings, the Apple Card could be the most impactful. From a high level, McKinsey estimates that global digital commerce volume (i.e., online and in-app purchases) will exceed $6 trillion by 2022, and mobile commerce will comprise 70% of those sales. Digitization provides two-sided benefits, it lowers the cost of each transaction and increases customer satisfaction. It removes friction at the point of sale and enhances security for its users. As the shopping experience migrates increasingly to the digital world, who controls the digital wallet holds the keys to the electronic kingdom. 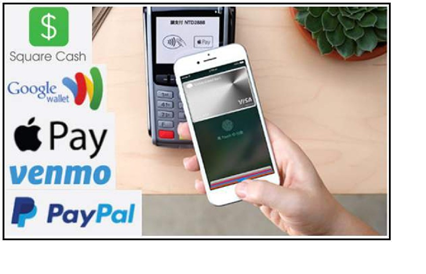 Loup Ventures estimates that Apple Pay has ~383M users (i.e., ~43% of the active iPhone base), but 88% of Apple Pay users are international vs. 12% in the US even though 21% of iPhone users are in the US. Adoption rates vary by country, but some countries like China have effectively gone cashless. According to iResearch Consulting Group mobile payments in China totaled $9T. In the US? $112B. One reason for the lower usage in the US is because US public transit systems have been slower to accept digital wallet payments. Recently NYC and Chicago transit authorities announced plans to accept Apple Pay, so waving your phone while running through a subway turnstile will soon be a reality, speeding your journey and Apple Pay’s adoption. On the whole, digital wallet penetration in the US is projected to grow at a 45% CAGR, and reach $400B in annual flows by 2022.

Introducing an Apple Card will help accelerate this trend as credit cards are used in about a third of all transactions in the US. To receive the highest 2% rebate using the Apple Card, you’ll also need to use it with Apple Pay (i.e., either swiping at the point of sale in a store or using it to pay when shopping online). Apple Pay’s revenue is still small, comprising just 1-2% of total services revenue, but growing rapidly. As transactions grow in volume (1.8B in the December 2018 quarter alone, a 3x growth from last year), so too will revenues. Admittedly, we anticipate the Apple Card won’t move the needle much as we estimate Apple will earn approximately the same ~0.15% per transaction, but that’s not what’s important.

Encouraging Apple Pay adoption is all about changing consumer behavior so that eventually using a digital wallet becomes habitual and entrenches Apple as a toll taker for commercial transactions. Furthermore, it increases customer captivity because trust is the handmaiden of loyalty. As technology companies embrace services, privacy and security become increasingly paramount, and with Apple’s suite of biometric protections (i.e., two-factor identification using Touch ID, Face ID, password or PIN), the more you trust Apple with your personal financial data, the more you’ll trust Apple with all your data. So once you’re used to storing financial data on Apple’s devices, perhaps you’ll trust Apple to store your healthcare data, especially as your Apple Watch and iPhone track your activities. Ultimately, healthcare is one of the holy grails, a $3.5T industry ripe for disruption. We’re in the midst of a deeper dive into opportunities in this space as a next potential investment theme for the fund, and will update you on our findings in later letters, just know that Apple is a multi-prong investment for us.

As consumer behavior, data/data analytics and advancements in software/hardware intersect, this is where it gets interesting. Introducing products in one category can facilitate entry into another, and as Apple evolves its services offerings, we anticipate Apple products will eventually envelope our lives. We needn’t be patient investors while we wait because Apple is buying back shares and paying dividends while we wait. All we have to do is be sensible and let the tree bear fruit.” 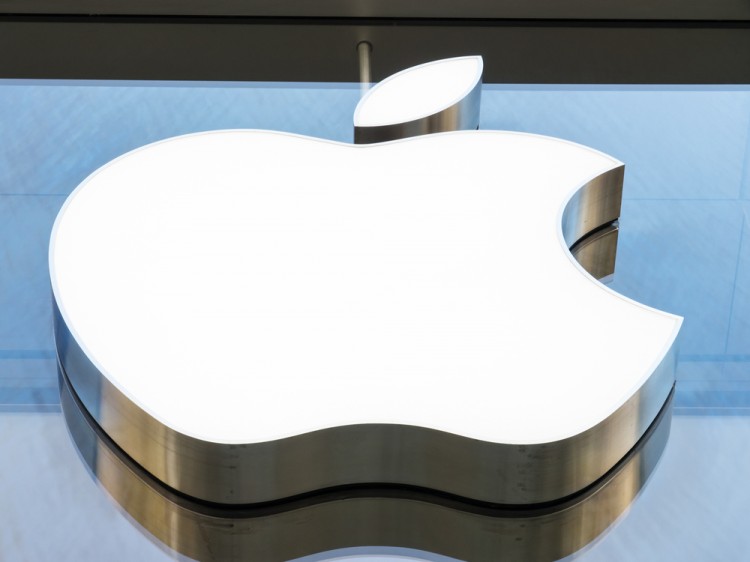 Heading into the first quarter of 2019, a total of 116 of the hedge funds tracked by Insider Monkey were bullish on this stock, a change of 4% from the second quarter of 2018. Below, you can check out the change in hedge fund sentiment towards AAPL over the last 14 quarters. With hedgies’ sentiment swirling, there exists a few notable hedge fund managers who were increasing their stakes meaningfully  (or already accumulated large positions).

The largest stake in Apple Inc. (NASDAQ:AAPL) was held by Berkshire Hathaway, which reported holding $39370.2 million worth of stock at the end of September. It was followed by Fisher Asset Management with a $2013.8 million position. Other investors bullish on the company included Citadel Investment Group, AQR Capital Management, and Adage Capital Management. 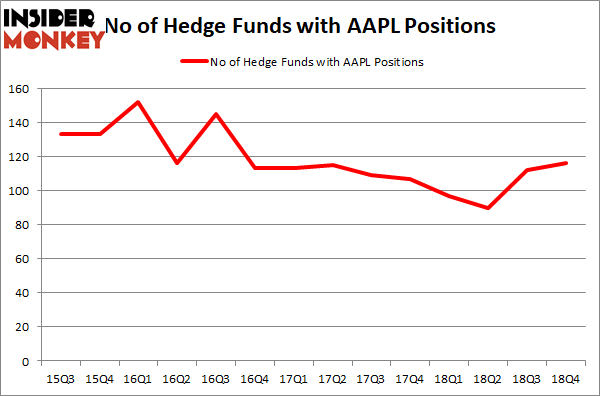 These Five Stocks Are Trending 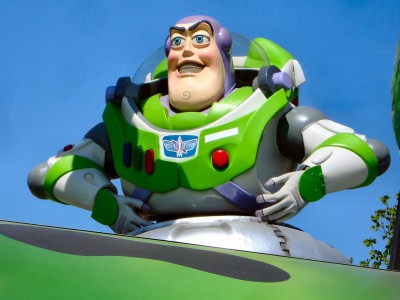 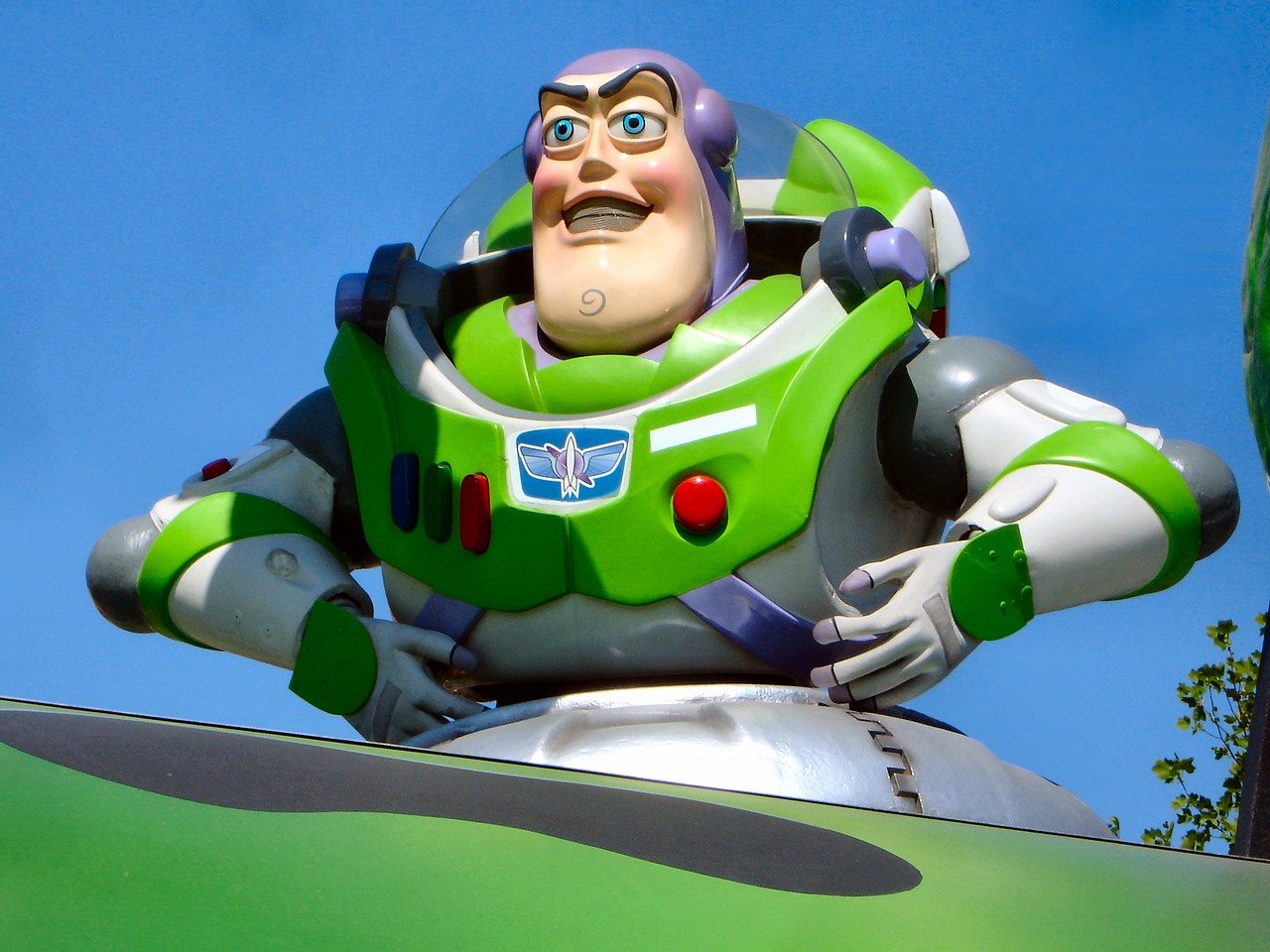 Disney is Now in the Streaming Game. Here’s What the Smart Money Thinks...
Monthly Newsletter Strategy
Download a free copy of our newsletter and see the details inside!
Hedge Fund Resource Center
Billionaire Hedge Funds