In January of 2012, Business Magazine released a list of the most sustainable companies in the world. You might be surprised to see who topped their list. I was surprised that it wasn’t a company like Apple Inc. (NASDAQ:AAPL), but rather a company in the pharmaceutical industry. As a type 1 diabetic, I understand the costs that go along with the disease. However, even I was surprised to see a company whose primary focus is diabetes at the top of this list.

According to the CDC (center for disease control and prevention), diabetics face medical expenses more than twice that of someone without the disease. I use a Medtronic, Inc. (NYSE:MDT) insulin pump, a device that is used for the continuous administration of insulin. There is currently  no way to prevent type 1 diabetes, however it only accounts for 5% of all diagnosed cases of diabetes. Though it may not seem like much, 9.2% of Medtronic, Inc. (NYSE:MDT)’s revenues are generated as a direct result of this disease. This is approximately $1.5 billion every year.

Quite frankly, I’m surprised its not more. If it weren’t for health insurance, I would be regularly paying around $1,000/quarter to Medtronic, Inc. (NYSE:MDT) just for supplies. The company shows a market cap of just under $48 billion. Bristol Myers Squibb Co. (NYSE:BMY) is a company that produces “antidiabetic” medicines. This is a smart move considering the CDC shows that over 35% of Americans have diabetes or pre-diabetes. They expect that by 2050, one in three Americans will be diagnosed with the disease. However, Bristol Myers Squibb Co. (NYSE:BMY) only generates about 5% of their $17.6 billion from these medicines.

Eli Lilly & Co. (NYSE:LLY) is a pharmaceutical company that generates $22.6 billion/year — nearly 17% of that is directly from insulin products. Humulin and Humalog are both produced by Lilly, and Humalog is probably the most common fast-acting insulin used. Eli Lilly & Co. (NYSE:LLY) has seen six increases in earnings per share over the past ten years. This is two fewer than Medtronic and the same amount as Bristol-Meyers. Revenues for these companies have increased for ten consecutive years for Medtronic, nine of ten years for Lilly, and six of ten for Bristol-Meyers. Remember, Bristol Myers Squibb Co. (NYSE:BMY) acquires a smaller percentage of revenue from diabetes than either Medtronic or Eli Lilly & Co. (NYSE:LLY).

So, the most sustainable company in the world according to Business magazine? Novo Nordisk A/S (ADR) (NYSE:NVO). The company’s vision is to:

Defeat diabetes by finding better methods of diabetes prevention, detection and treatment. We will work actively to promote collaboration between all parties in the healthcare system in order to achieve our common goals.

Believe it or not, Novo Nordisk A/S (ADR) (NYSE:NVO) has a market cap of $95 billion, 43% higher than the next company in this post, Bristol-Meyers. Novo Nordisk has experienced ten consecutive revenue increases, and earnings per share that have risen nine of the past ten years. How have these stocks performed? Lilly has done extremely well in the past year, but Novo Nordisk A/S (ADR) (NYSE:NVO) steals the show of long-term performance. 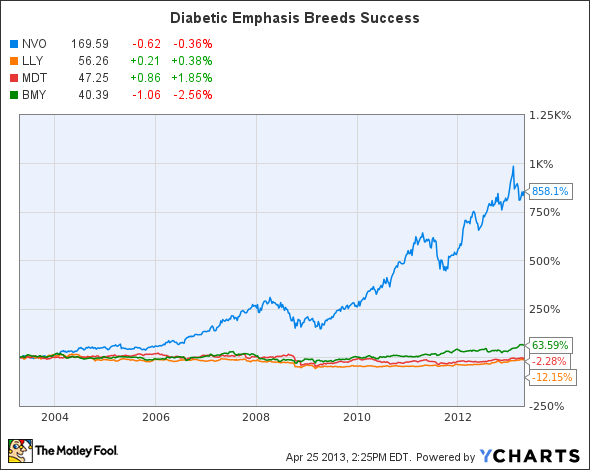