Ron Johnson is out as CEO of J.C. Penney Company, Inc. (NYSE:JCP). Although his ambitious turnaround strategy for the ancient retailer floundered, Johnson can still fall back on his previous experience. Ultimately, Johnson could add value to a number of organizations, but in particular, Best Buy Co., Inc. (NYSE:BBY), Microsoft Corporation (NASDAQ:MSFT) and Apple Inc. (NASDAQ:AAPL) could most use his services. 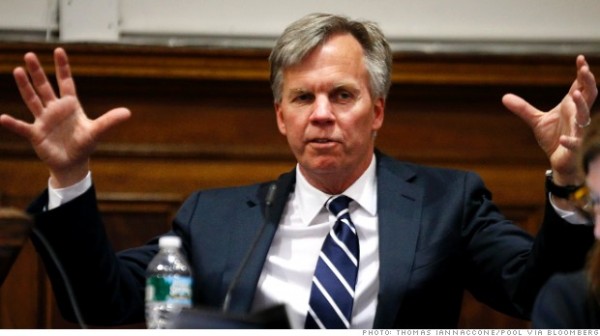 Ron Johnson is down, but not out

Although many people may be quick to use his brief tenure at J.C. Penney as evidence of his incompetence, Johnson can still lay claim to Apple Inc. (NASDAQ:AAPL)’s retail strategy — prior to running J.C. Penney Company, Inc. (NYSE:JCP), Johnson spearheaded Apple’s retail operation from 2000 to 2011.

No matter what one thinks of Apple Inc. (NASDAQ:AAPL) or its products, its retail dominance is unquestionable, with its stores continuing to lead in the important metric of sales per square foot.

While Johnson had the luxury of selling stylish, quality products, he did so in an impressive manner. Apple Inc. (NASDAQ:AAPL)’s retail operation surged over the last decade — other tech stores like Best Buy and RadioShack Corporation (NYSE:RSH) struggled. Some, like Circuit City, went under completely.

Apple Inc. (NASDAQ:AAPL)’s retail stores have been a key component in the company’s resurgence, as Apple’s stores provide an interface between the company and its customers. Would Apple’s products be considered so reliable and easy to use without the company’s famous Genius Bar providing on-demand tech support and repairs?

Johnson may have failed when it comes to selling budget clothing. His ability to sell tech products, however, remains intact.

Last week, Best Buy announced that they would open small, self-contained “Samsung Experience Shops” within larger Best Buy stores. With this strategy, Best Buy will be borrowing a number of Johnson’s ideas.

First, the actual Samsung shops themselves are likely to borrow heavily from concepts pioneered at Johnson’s Apple stores. Early images of Samsung’s shops reveal remarkable similarities to Apple’s stores, including modern-looking tables for displaying Samsung’s devices and what appears to be a copy of the Genius Bar.

Secondly, the concept of the shop within the larger Best Buy store was one of Johnson’s biggest initiatives at J.C. Penney. Johnson believed these shops would drive higher sales than endless, poorly organized rows of merchandise.

Other electronic makers such as Microsoft Corporation (NASDAQ:MSFT), Google Inc (NASDAQ:GOOG), Sony Corporation (ADR) (NYSE:SNE) or HTC could be interested in having their own mini shops within Best Buy.

Hubert Joly is still new on the job, and since taking the position, Best Buy’s stock has been on fire. Regardless, Best Buy’s future would look far brighter with Ron Johnson at the helm. As the man who pioneered the concepts Best Buy is currently attempting to copy, he would be the most qualified to implement them.

Microsoft Corporation (NASDAQ:MSFT)’s Surface tablet is the company’s first foray into the PC market. The company rolled out pop-up shops throughout the US last year to help sell the device, and is currently working on creating more permanent establishments.

In addition to Surface, Microsoft’s stores could also become the go-to location to purchase the company’s next Xbox, and if the rumors are true, the company’s first smartphone.