Apple Inc. (AAPL): Is This Its Next Big Thing?

The rumor mill on the internet is abuzz with information about Apple Inc. (NASDAQ:AAPL)‘s iWatch, an upcoming wearable computing device. Apple Inc. (NASDAQ:AAPL) can’t base its entire presence in this market on a device which may or may not be able to gain traction. Wearable computing can also extend itself in the realm of augmented reality (AR). A watch by itself simply doesn’t bode well for this concept.

How AR and iOS could work together

The patent describes a system that iOS devices can use in a variety of ways. In Apple Inc. (NASDAQ:AAPL)’s provided example, a real-world 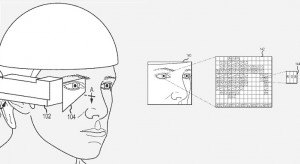 view of San Francisco is paired with a computer-generated model of the same. The user can interact with the computer generated model to navigate through streets, and modify points of interest in case they’re traveling, something which sounds like it would add considerably to the current iOS Maps experience.

As with other AR systems, the patent uses real-world images and displays them underneath a computer generated layer of information. In the invention’s example, a user is holding their portable device over a circuit board. The live video displays various components like the processor, memory cards, and capacitors. Also included in this view is a bar code and markers.

In one embodiment, the live video is overlaid with a combined information layer, which can take the appearance of dashed or colored lines, annotations, and other visual cues that are processed and generated by the device’s on-board CPU. Annotations can be in text form, images, or Web links, and provide information in real time relating to the corresponding objects.

While the patent filing proposes an AR implementation using existing technologies found on the iPad (and the iPhone), an earlier filing from the company relating to the same subject matter is slightly more ambitious. It proposes iPads whose display screens have a viewing area with a transparent portion, enabling a user to view objects behind the electronic device by looking through the display screen.

Additional implementations could call for an iPad with two or more display screens (each having respective viewing areas with transparent portions) arranged in an overlaid or back-to-back manner, or two display screens whereby one display screen is partially opaque, but displays a transparent window that’s movable via multi-touch input from the user.

Google Inc (NASDAQ:GOOG) has made the concept of AR commercially viable with Google Glass that will be launched later this year. The device is a wearable computer with a head-mounted display that can run apps, record high-definition video, and is operated through voice commands.

Already, a range of apps have been developed for Google Inc (NASDAQ:GOOG) Glass, including those for Facebook, Path, The New York Times, Gmail, JetBlue, and Skitch. Google says the technology can inform users about weather forecast, provide directions, send messages, and translate.