There are very few certainties when it comes to investing in the stock market. For the past decade, however, nothing seemed more certain than Apple Inc. (NASDAQ:AAPL)’s continued excellence in the tech sector. Churning out world-changing innovations like the iPod, iPhone, iPad, and the Macbook, innovation and creativity were as natural to the company as tying one’s shoes. The last year, however, has called this company’s long-standing reputation into question. As investors are starting to ask questions, some are also looking elsewhere for opportunities.

Last week, Bloomberg News polled hedge fund investors from all over the world on the status of Apple Inc. (NASDAQ:AAPL). A whopping 71% said that Apple has a problem with innovation. What is worse for Apple Inc. (NASDAQ:AAPL) is that this loss of confidence in their ability to innovate has resulted in various hedge funds, especially in Europe and Asia, selling Apple stock and looking at other investment opportunities. Amid slowing sales and vigorous competition, Apple’s stock has plunged by 40% from its September 2011 high according to Bloomberg News. 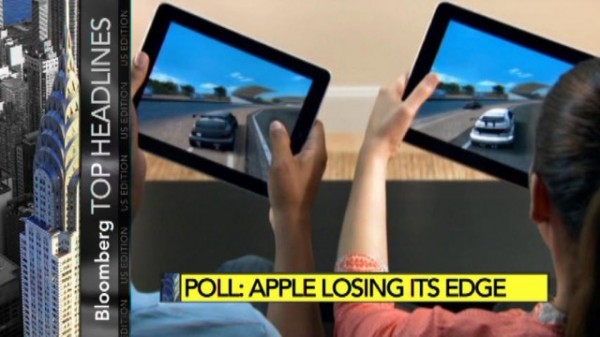 Making matters worse, the company has suffered a drop in return on assets (ROA) from 31% at its 2012 annual report to roughly 19% as it stands currently. Apple Inc. (NASDAQ:AAPL) had reported increasing ROAs from 2010 to 2012, which at the time had alleviated some investors’ concerns about whether or not this was a good company to invest in. Now it seems that the company’s current lack of innovation is showing up on the company’s income statements as returns begin to dwindle.

Aside from investor confidence, Apple Inc. (NASDAQ:AAPL) has to get back to creating new gadgets that people will buy. The company must also stay mindful mindful that its close competitor Microsoft Corporation (NASDAQ:MSFT) recently announced its latest video game console to the general public.

Apple’s pain with investors also presented a golden opportunity for Microsoft, allowing the company to sell corporate bonds for a lower interest rate than Apple for the first time in a while. The record $17 billion bond sale for Apple may be a sign that Apple is in the process of increasing their capital, which should fuel speculations that they will be getting off their innovation slide very soon. The interest rate comparisons show that Microsoft is the safer bet, however, thanks largely to a huge surge in Microsoft stock this year, which has also put Bill Gates back on top as the world’s richest man.

In addition, Microsoft’s new game console is set to include a highly-responsive version of its motion software Kinect, as well as the ability to use Skype while on the new device. These two improvements are sure to please console enthusiasts such as myself as well as investors who are looking to see if Microsoft can build on recent successes including the Xbox 360 beating Sony’s PlayStation as the #1 game console. If Microsoft has a good rest of 2013, which looks like it will be at least partially dependent on how well the new console release goes down, this could mean a serious setback for Apple since Apple isn’t a participant in console gaming – or at least not yet.

While the console wars usually don’t involve Apple, one of the enduring strengths of the company was that its iPad and iPhone helped create a platform for numerous small independent game companies to create games at a low cost. This has led some to speculate on a future in which Apple can dance with the “big 3” (Microsoft, Nintendo, and Sony) in video game development. Unfortunately, Apple has to contend with phone makers Nokia Corporation (ADR) (NYSE:NOK) and Samsung in the realm of portable gaming, companies whose smartphones that use Google Inc (NASDAQ:GOOG)’s Android software are eating up market share. This is largely thanks to the phones being cheaper and more accessible than the iconic iPhone, along with boasting a more wide open platform for app developers. This could definitely change if Apple can release a new device or a significant improvement on what they already have. Such a change would give the company a boost in what is quickly becoming a highly competitive section of the market, especially as it appears that merely brandishing the iconic Mac logo won’t be enough anymore.

Did This Attract This Activist Billionaire to Sony Corporation (ADR) (SNE)?