One year ago last week, I wrote a comparative analysis of Google Inc (NASDAQ:GOOG), Apple Inc. (NASDAQ:AAPL), and Priceline.com Inc (NASDAQ:PCLN). I considered them to be “highfliers” because of their lofty stock prices, and I believe it timely and appropriate to revisit their performance over the past 12 months. After all, these companies provide a lot of cannon fodder for analysts and financial journalists alike, and lots of investors continue to revere them.

Google Inc (NASDAQ:GOOG) and Apple Inc. (NASDAQ:AAPL) are also important because of their market capitalizations — $263 billion and $368 billion, respectively — and how they affects the companies’ contribution to the performance of the S&P 500. My research has uncovered some surprising, if not startling, revelations about the long-term performance of the S&P 500 Index, and how some of the most favored companies in this index have actually underperformed. Anecdotal evidence suggests that the largest allocation in equity portfolios is the S&P 500, which has become a proxy for “the market.” However, traditional indexes such as the S&P 500 have major flaws in their construction. For one thing, the indexes are market-cap weighted. By the time companies become large constituents of the index, they’re often past their innovative and high-growth phases and more often than not act as a significant drag on performance. That’s what has happened to both Google Inc (NASDAQ:GOOG) and Apple Inc. (NASDAQ:AAPL). Priceline.com Inc (NASDAQ:PCLN) has a market cap of “only” $34 billion, so its effect on the index is not as great.

According to Ned Davis Research, “popularity kills.” Since 1972, the S&P 500 increased nearly 5,000%. Yet the top stock in the S&P 500 by market capitalization increased in value approximately 400%. With this in mind, let’s see what I wrote last year:

Priceline’s stock price increased 50.74% last quarter and currently sits around $755 a share. Similarly, Apple shares have increased 50.43% since the start of 2012 and are near $625 but off their recent high of $632. By contrast, Google shares have declined by 2.78% and are currently at $635 a share. … The trend data reflects Priceline and Apple’s significant price appreciations this year that have outpaced estimated growth rates … We should expect the rate of price appreciation to abate.

In the past, my research has incorporated a Motley Fool Earnings Quality score, or EQ, that taps into a database that ranks individual stocks. The database designates an “A” through “F” weekly ranking, based on price, cash flow, revenue, and relative strength, among other things. Stocks with poor earnings quality tend to underperform, so we look for trends that might predict future outcomes.

Google Inc (NASDAQ:GOOG)’s EQ score last year at this time was “F,” equivalent to a failing grade, but it improved recently to a “D.” Apple improved from a “D” to a “B” during this time, and priceline.com has remained an “F.” The model downgrades stocks that are overvalued relative to these metrics. 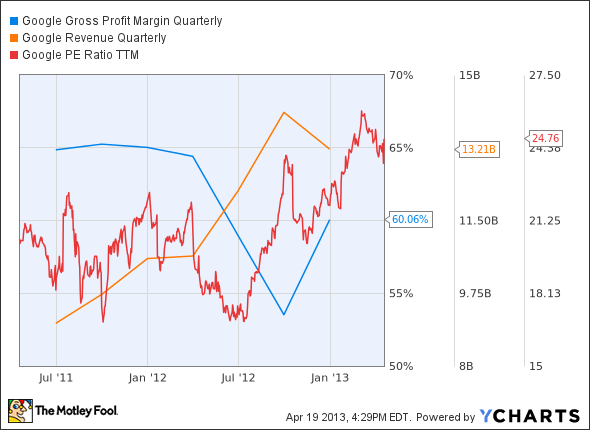 Google Inc (NASDAQ:GOOG)’s chart doesn’t reflect its most recent numbers, reported on April 18. However, the trends are apparent. The company’s gross margin slipped from 65% to about 54%, and then back up to 60%, reflecting the increasing cost of goods sold. According to Capital IQ, the most recent gross margin came in at 57%. Revenue also declined last quarter to $13.21 billion but was reported at $13.97 billion for the latest quarter. The rising P/E ratio for the past 12 months of 24.42 reflects the stock price gains. According to Yahoo! Finance, this figure has increased slightly to 24.83.