Howard Silverblatt, an analyst at S&P Dow Jones Indices, was recently quoted by Barron’s as highlighting Apple Inc. (NASDAQ:AAPL) as the world’s biggest dividend payer, pushing past Exxon by an aggregate $170 million. That assumes that Exxon doesn’t increase its dividend or see a change in its share count.

Exxon Mobil Corporation (NYSE:XOM) has a penchant for buying back shares, which would actually reduce its aggregate dividend, so a dividend hike is likely the only way it could get back the top spot. Silverblatt’s analysis suggests that a mere penny increase in Exxon’s quarterly distribution would push the integrated oil giant into the lead again.

While the idea of having the largest aggregate dividend is interesting, it speaks more to company size than anything else. However, the list of top dividend payers is filled with large, financially strong companies that clearly believe it is important to return value to shareholders. So getting caught up in who’s number one is fun, but any of the top companies are worth a look.

Here are the top three. 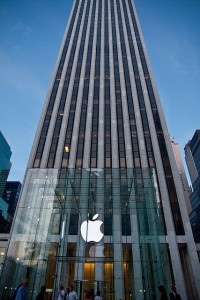 Apple Inc. (NASDAQ:AAPL) shares have sold off notably since the company initiated a dividend late in 2012. It seems that investors have realized that the company is more of a consumer products company than previously believed. That doesn’t make Apple a bad company, but it does change how one might look at it.

The latest dividend increase, potentially spurred by a dissident shareholder, is nice to see and comes with a big boost in the company’s buyback efforts. However, management also intends to start using debt. That is a big shift and probably speaks more to a changed view of Apple Inc. (NASDAQ:AAPL)’s outlook than the dividend.

Still, the company has a dividend yield of around 3%, remains a leader in key growth markets, and is beloved by its customers. Now could be a good time for investors to start taking a look at this strangely out of favor industry leader. That’s true even if its most innovative days are behind it.

Exxon Mobil Corporation (NYSE:XOM) is among the largest integrated oil and natural gas giants in the world. Its dividend yield is around 2.5%, which seems odd when compared to Apple Inc. (NASDAQ:AAPL)’s 3% yield. However, the company has decades of annual dividend increases under its belt, a proven track record of operational excellence, and the financial strength to survive through even the most difficult markets.

That combination is on clear display today, as the company made an aggressive bet on natural gas by buying XTO Energy a few years back. Exxon Mobil Corporation (NYSE:XOM) is projecting that natural gas demand will increase over the next decade or so, to the point where it overtakes coal as the second most used energy source. Right now, however, a collapse in U.S. natural gas prices has been a notable drag on performance.