At this time last year, Apple Inc. (NASDAQ:AAPL) CEO Tim Cook was sitting on top of the world. Apple had just reported results that blew by expectations for two consecutive quarters, culminating in the company’s stratospheric gross margin of 47.4% for the quarter that ended in March 2012. Not surprisingly, these strong results led to big increases in Apple’s stock price. In the first nine months following Tim Cook’s appointment as the permanent CEO of Apple (which occurred on Aug. 24, 2011), Apple stock soared more than 50%. 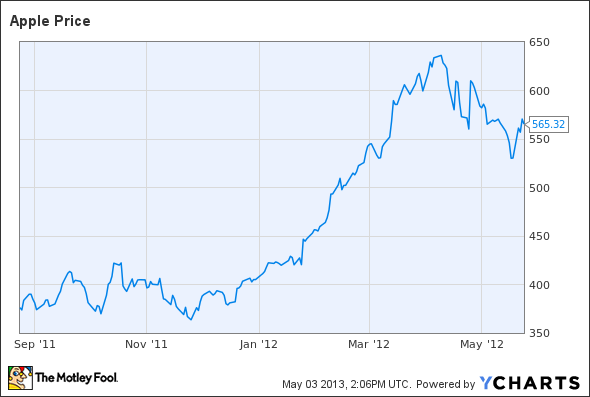 Clearly, at this time last year, the market believed Tim Cook was a capable leader for Apple Inc. (NASDAQ:AAPL). There was comparatively little second-guessing of Cook’s decisions, and no hand-wringing about what Steve Jobs would do if he were still around.

Fast-forward a year, and things have changed dramatically. Before Apple’s earnings report in late April, Forbes contributor Gene Marcial asserted that anonymous “sources” had heard that Apple might be looking for a replacement CEO. Marcial further noted that several major funds had cut their holdings of Apple and cited this as evidence of a looming shareholder rebellion. Cook seems to be holding off shareholder pressure for now because of Apple’s recently announced dividend and buyback increase. Still, the flurry of speculation about his job security indicates that many people think Tim Cook has not performed up to expectations. This judgment seems very hasty, though: Cook deserves at least another year at the helm to show whether he can deliver exciting new products.

The end of innovation?
Not surprisingly, the main worry about Cook’s leadership is that as an “operations guy” he won’t be able to drive innovation at Apple Inc. (NASDAQ:AAPL). Steve Jobs had an uncanny ability to figure out what consumers would want and devise successful marketing campaigns for the resulting products, and it is unfair to expect Cook or anybody else to “be the next Steve Jobs.” That said, Apple bears believe that competitors have caught up to Apple Inc. (NASDAQ:AAPL) because the company is settling for evolution rather than innovation. Bears frequently like to point to the iPhone 5 or the iPad Mini as evidence for their point.

Both products — but especially the iPad Mini — differentiate themselves from predecessors primarily by adopting a new form factor. The iPhone 5 has a slightly larger screen than previous iPhones, while the iPad Mini is a slimmed-down iPad with a smaller screen. Critics argue that these products are mere reactions to big-screen phones from Samsung and others, and smaller, cheaper tablets from the likes of Amazon.com, Inc. (NASDAQ:AMZN) and Google Inc (NASDAQ:GOOG). Instead, they assert that Apple should be innovating by bringing completely different products to market.

Apple Vs Samsung: Apple Not Backing Down From Samsung