AppFolio Inc (APPF): Are Hedge Funds Right About This Stock?

How do we determine whether AppFolio Inc (NASDAQ:APPF) makes for a good investment at the moment? We analyze the sentiment of a select group of the very best investors in the world, who spend immense amounts of time and resources studying companies. They may not always be right (no one is), but data shows that their consensus long positions have historically outperformed the market when we adjust for known risk factors.

AppFolio Inc (NASDAQ:APPF) was in 19 hedge funds’ portfolios at the end of September. APPF investors should be aware of an increase in activity from the world’s largest hedge funds in recent months. There were 17 hedge funds in our database with APPF positions at the end of the previous quarter. Our calculations also showed that APPF isn’t among the 30 most popular stocks among hedge funds.

At the end of the third quarter, a total of 19 of the hedge funds tracked by Insider Monkey held long positions in this stock, a change of 12% from the previous quarter. Below, you can check out the change in hedge fund sentiment towards APPF over the last 13 quarters. With the smart money’s sentiment swirling, there exists a select group of noteworthy hedge fund managers who were boosting their holdings significantly (or already accumulated large positions). 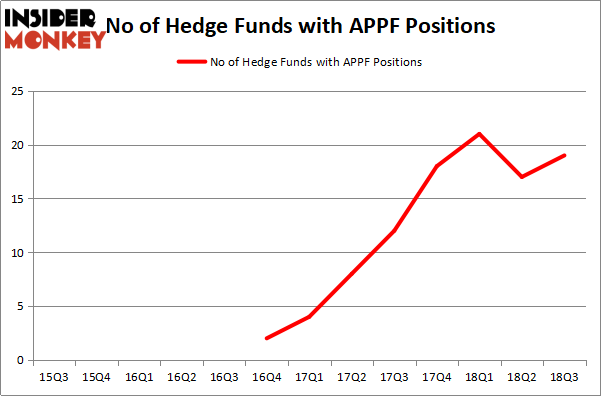 Among these funds, Ashe Capital held the most valuable stake in AppFolio Inc (NASDAQ:APPF), which was worth $107.4 million at the end of the third quarter. On the second spot was Renaissance Technologies which amassed $42.7 million worth of shares. Moreover, Two Sigma Advisors, Arrowstreet Capital, and Osterweis Capital Management were also bullish on AppFolio Inc (NASDAQ:APPF), allocating a large percentage of their portfolios to this stock.

As you can see these stocks had an average of 12.5 hedge funds with bullish positions and the average amount invested in these stocks was $216 million. That figure was $216 million in APPF’s case. Esterline Technologies Corporation (NYSE:ESL) is the most popular stock in this table. On the other hand China Biologic Products Holdings, Inc. (NASDAQ:CBPO) is the least popular one with only 8 bullish hedge fund positions. AppFolio Inc (NASDAQ:APPF) is not the most popular stock in this group but hedge fund interest is still above average. This is a slightly positive signal but we’d rather spend our time researching stocks that hedge funds are piling on. In this regard ESL might be a better candidate to consider a long position.