For-profit education is regarded as one of the worst possible industries to invest your money in. The industry has long been known for its high default rates and poor academic performance. After the Government Accountability Office published a report in August 2010 criticizing the marketing practices and fraudulent activities of some for-profit colleges, things became even worse. As an example, Apollo Group Inc (NASDAQ:APOL), owner of University of Phoenix, has lost more than half of its market capitalization since that report was released!

However, I believe that Strayer Education Inc (NASDAQ:STRA) is about to change the industry’s image. At first glance, the 41% one-year negative return of this stock looks scary. As the owner of Strayer University, though, which is an institution enrolling more than 38,000 students through its online programs and at more than 80 campuses located in 24 states, this company may be way too undervalued at its current price. 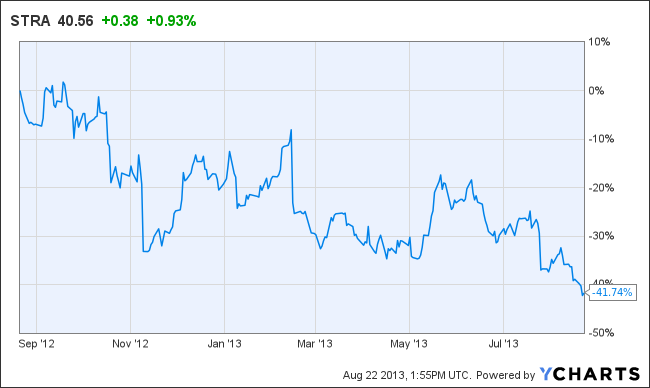 The macroeconomics of education
First, let’s start with a potential upside catalyst: the demand for higher education is set to rise in the next few years.

This is not so obvious at first glance. According to the NSCRC, since 2010 there has been a contraction in the national demand for higher education which is present in all sectors. The overall enrollment change in spring of this year was -2%. Across all sectors, the four-year for-profit segment where Strayer Education Inc (NASDAQ:STRA) is located experienced the most negative impact, contracting roughly 8%. The good news is that the latest data suggests the rate of decline in enrollment rates is lower than it was one year ago, which in turn suggests that demand may be recovering.

Will demand stop contracting? In the long run, yes. This is because an increase in demand for higher education may be associated with improvements in employment rates. An old theory says that when there is high unemployment, people go back to school because the opportunity cost of studying is smaller, but the latest data suggests a different pattern. People don’t want to study when long-term unemployment is present in the economy.

These are strong incentives to get a higher education as soon as possible. Such incentives will, in the long run, drive demand up. When you consider that only 57% of Americans have gone beyond high school, there’s plenty of room for growth here. Giving 25% tuition discounts to students who stay until graduation, Strayer Education Inc (NASDAQ:STRA) could catch most of the additional demand to be created in the next years because it offers a decent degree for a low price.

Valuation
Now comes the best part–even in the worst possible growth scenario, this company is undervalued. According to portfolio manager Henrik Stang, a reverse discounted cash flow with a 10% discount rate, 0% forecast period growth for the next 10 years and 0% terminal growth rate yields a fair estimate of $46 per share. This represents a 15% potential upside in the worst-case scenario.

Based on the average of a DCF valuation and Earnings Power Value model and the likely value of the company in a buyout scenario, Stang arrives at a fair value of $74. That’s an astonishing 85% potential upside!

There are two obvious signals that this company is dirt cheap. First, it is trading at 8 times earnings (or 6 times its free cash flow.) Second, according to the latest quarter’s information, the company made $132 million in revenue. Assume this is constant. That leaves you with $528 million in revenue per year, $87 million more than its whole market capitalization!

Trading at almost 20 times its earnings, Grand Canyon Education Inc (NASDAQ:LOPE) is certainly more expensive than Strayer, but that’s probably only because this university is projected to grow significantly this fiscal year. According to the latest earnings call, revenue grew 19%.  Adjusted earnings before interest, taxes, debt and amortization came in at $40 million, up 25% from a year ago.

Some reasons for such success include its cheap online program and the fact that as a Christian school it can attract students coming from evangelical households, a fast-growing demographic segment according to Gallup’s estimates . However, Grand Canyon has one strong risk. According to the company’s latest 10-K, the Department of Education is checking into Grand Canyon University’s programs, and this could lead to fines, penalties or other sanctions. Strayer, on the other hand, has a safe 10-year accreditation from the Middle States Commission on Higher Education and solid reputation.

Compared with Grand Canyon and Strayer, Apollo Group Inc (NASDAQ:APOL) doesn’t look so attractive. Last month, the company had the accreditation of its University of Phoenix and Western International University subsidiaries reaffirmed until 2023, but got placed on Notice. That’s a sanction given to universities that have issues in their administrative structure and governance. This could hurt enrollment rates in the near future.

The upside is that the company reported net revenue of $947 million in the third quarter of 2013. That’s below the $1.1 billion made last year in the same quarter, but it is roughly half of Apollo Group Inc (NASDAQ:APOL)’s market capitalization. In other words, it takes about two quarters for the company to sell tuition fees for an amount equivalent to its market cap. That and the fact that the company only trades at 7.6 times earnings suggests the company could also be undervalued.

Final Foolish thoughts
Even in the worst case scenario with the assumption that revenue won’t grow again, Strayer is undervalued by 15%. With a solid reputation and a promising online education program, the company’s university clearly can grow more. Furthermore, the recent decrease in enrollment rates is due to an overall contraction in the demand for higher education due to a long period of high unemployment rates. Recent bullish macroeconomic data, the fact that 35% of Americans didn’t go beyond high school and a well-known positive correlation between education and salaries suggest that demand is set to rise in the long run, however.

The article Why This Company Will Change the Education Services Industry originally appeared on Fool.com and is written by Adrian Campos. 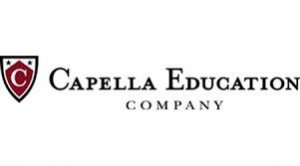 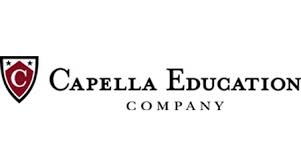 Should You Buy DeVry Inc. (DV)?