Apollo Group Inc (NASDAQ:APOL), the for-profit education company that is the parent of University of Phoenix, looks like a great deal on the surface. At 7.9 times TTM earnings and over $1.2 billion in net cash, it almost looks like a “too good to be true” situation. It is. The company’s business model is no longer viable and I believe that Apollo’s recent downsizing efforts are just the beginning.

Apollo Group Inc (NASDAQ:APOL) owns several for-profit educational institutions, which include Western International University, Axia College, the Institute for Professional Development, and their flagship University of Phoenix, which accounts for over 90% of the company’s enrollment.

The University of Phoenix is one of the largest higher education institutions in the United States by enrollment, and offers degrees on the associates, bachelors, masters, and doctoral levels. The school has an open-enrollment admissions policy, requiring only a high-school diploma or GED for admissions.

The company’s student enrollment (and revenues) peaked at the tail end of the financial crisis, when a record number of students were returning to school as a result of the difficult job market at the time. Enrollment was 470,800 students at the end of 2011, which has dropped sharply to just over 300,000 as of February of this year. This steep dropped has greatly alarmed shareholders (rightly so), and Apollo Group Inc (NASDAQ:APOL)’s share price has plummeted 75% since 2009. 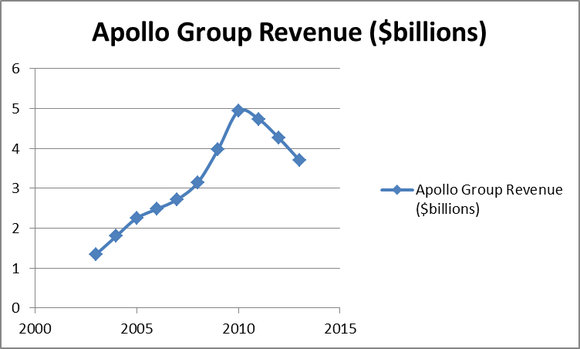 In the midst of their rapidly declining enrollment, Apollo announced that the University of Phoenix is planning to close 115 of its campuses, about half of the total, and to lay off about 1,000 of its 17,000 employees. These moves will leave the company with 112 campuses and are expected to reduce Apollo’s operating costs by about $350 million annually. Sounds great, right?

For-Profit Education: Are There Any Winners?

The problem of declining enrollment is not unique to Apollo Group Inc (NASDAQ:APOL)’s schools. All across the for-profit sector, enrollments have been declining sharply for the past two years amid a steady stream of bad publicity having to do with for-profit schools’ low graduation rates, high student loan default rates, and low opinions of a lot of for-profit programs from prospective employers. In response to this, several companies, including Apollo Group Inc (NASDAQ:APOL), started a three-week orientation program that became a prerequisite for enrollment, which has hurt enrollment even more. The company has publicly stated that about 20% of the students who enroll in the orientation don’t make it through, or decide not to enroll in more coursework.

Strayer Education Inc (STRA), DeVry Inc. (DV): Should You Stray Away From This...