Apache Corporation (NYSE:APA) has had a tough year. Their stock price is down 28% over the last 12 months and earnings have decreased since 2011 while expenses have increased. This is not a recipe for success. 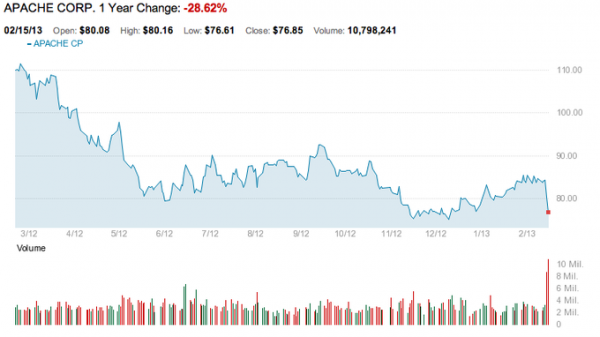 Their earnings have had a significant increase from 2009 to 2011, ranging from -$0.87 per share to $12.02 per share in 2011. However, 2012 earnings per share were only $4.92 per share. When compared to their main competitors Anadarko Petroleum Corporation (NYSE:APC), Devon Energy Corporation (NYSE:DVN) and EOG Resources, Inc. (NYSE:EOG), their earnings per share took the deepest dive and also the steepest recovery through 2011. Fourth quarter 2012 saw a drop in the energy sector and was the only sector in the S&P 500 to see a loss last Friday.

The current P/E and EPS put Apache at the top of the list for relative value. $1 of earnings is considerably cheaper from Apache than from its competitors.

The WACC is calculated as 12%. The market value, market value of debt and market value of invested capital of Anadarko, Devon and EOG were used with their levered Beta to determine an unlevered Beta. With a risk free rate of 3.01% and an assumed market risk premium of 5%, Apache’ WACC was determined.

Using this discount rate and 2012 year-end earnings of $2.001 billion, the stock should be trading at a steep discount.

The growth rate was calcuted using the last four year’s earnings from Anadarko, Devon, and EOG. This was averaged over time and across each year and weighted with Apache’s actual earnings growth. Because investors are valuing Apache at $76.85 per share, they are assuming a future growth rate of 5.6% from the current earnings.

Now is not the time to purchase Apache. It has been a strong company with a long history of success, but they are overvalued based on earnings and competitive analysis. There is an opportunity for a short-sale or a put-option play in the near future.

Here are some highlights – or rather lowlights – about their earnings drop last year.

1). Apache had lower-than-expected production growth. They were not producing as much as they had anticipated.

Why You Should Pay Attention to This Texas Oil Play: Devon Energy Corporation...