After successful splits of Time Warner Cable Inc (NYSE:TWC) and AOL, Inc. (NYSE:AOL) in 2009, Time Warner Inc (NYSE:TWX) is attempting another spin-off. This time the company hopes to separate the struggling magazine producer, Time, Inc. Will this spin be as successful?

Time Warner is a global leader in media and entertainment with businesses in television networks, film and TV entertainment and publishing. Time, Inc. is a leading magazine producer that reaches 110 million Americans with influential brands TIME, PEOPLE, and SPORTS ILLUSTRATED.

The combined company has a market value of over $53 billion after surging to 52-week highs following this announcement. The market is very receptive of spin-offs these days after recent success stories.

Typical of most spin-offs, a money losing or depressed division is spun-off in order for a strong division to be valued at market rates. In the case of ConocoPhillips (NYSE:COP) last year, the refining division of Phillips 66 (NYSE:PSX) was purged in order to allow the exploration company to shine. While both companies have done well, Phillips 66 has exploded higher and owing a refining stock has turned hip as margins expanded due to recent oil production boom in the US.

In this Time Warner Inc (NYSE:TWX) case, the magazines division is seen as very undesirable and worthy of dumping. After all, the logical person knows that print ad revenues continue to struggle and the sector is a declining breed in the digital world.

On the way to the graveyard though, investors should take note of Berkshire Hathaway Inc. (NYSE:BRK.A) buying up every local newspaper possible. If Buffett thinks value exists in newspapers than value possibly exists in magazines.

While the future appears bleak, this AP report highlights how the gaining popularity of tablets and moves to standardize digital magazines is predicted to lead to digital magazine ad growth of over 50% from 2011 to 2016. During that time period, print ad revenue is expected to remain flat.

Meredith Corporation (NYSE:MDP)
confirmed having discussions with Time Warner Inc (NYSE:TWX) regarding a combination of certain media assets. While a deal doesn’t appear likely, Meredith remains on the acquisition trail so it is still possible. More importantly, that company has been successful in running its brands and could do wonders with those hidden at Time, Inc.

The most important metric to understand is that spin-offs typically generate higher profits for the companies involved. As the company hidden within a conglomerate obtains the freedom to operate independently, it typically becomes more successful as projects get the needed attention and general productivity improves.

With the AOL, Inc. (NYSE:AOL) and Time Warner Cable Inc (NYSE:TWC) split, all stocks have easily surged beyond the gains in the S&P 500. See the chart below: 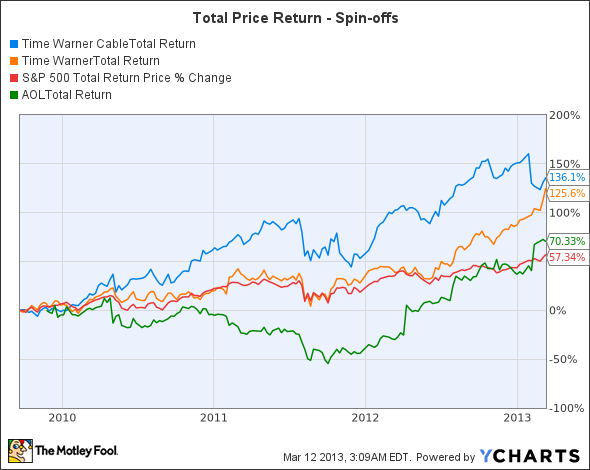 As a note, the AOL, Inc. (NYSE:AOL) stock has performed even better when comparing against the time period of its split back in December 2009 instead of using the Mar. 12 split date for Cable.