In the course of 2012, shares of Apple Inc. (NASDAQ:AAPL) rocketed from a little above $400 to a peak just above $700 in September. The stock price has proceeded to fall even faster, plunging to a new trading range in the low $400s recently. 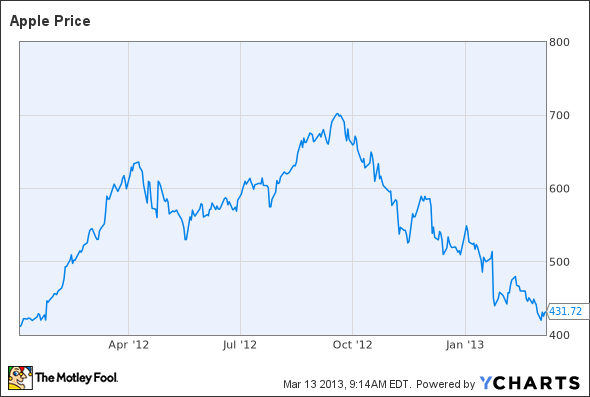 In trying to keep up with the latest moves in Apple Inc. (NASDAQ:AAPL)’s stock price, analysts have had to make some rather embarrassing changes to their price targets. Long-term investors should more or less ignore these frequent price target revisions. There are plenty of reasons to believe that Apple is still a long-term winner, and that the hiccups that have caused Apple’s 40% fall are just a bump in the road.

How much has really changed?

Peter Misek of Jefferies cut his Apple Inc. (NASDAQ:AAPL) price target to $420 this week, citing numerous challenges for the company. These include: 1. the mythical “iTV” being delayed to 2014, 2. the iPhone 5S being pushed back until later in 2013, and 3. a shift in consumer preferences toward larger screen sizes, particularly “phablets”. Misek’s recent bearishness is all the more odd because as recently as December he had a $900 price target on the stock. Since then he has cut his price target to $800, then $500, and now $420, as he has become more progressively more bearish.

What really seems to be happening is that Misek — like many other Wall Street analysts — is chasing the Apple price chart, which is ultimately a measure of current investor sentiment. It is very reasonable for Apple Inc. (NASDAQ:AAPL) investors to be worried about Samsung, and other Google Inc (NASDAQ:GOOG) Android smartphone vendors. However, the outlook has not changed that much over the past year (let alone the past three months). There is no plausible long-term logic to back up the significant drops in Wall Street price targets recently.

The bigger picture
To better understand the problem with Wall Street’s short-term mentality, let’s take a look at Misek’s phablet thesis. He has argued on several recent occasions that “Apple is losing the screen-size war.” There are at least two major flaws in that statement. First, true phablets like the Galaxy Note are still niche products compared to the iPhone. It took two months for Galaxy Note II sales to hit 5 million, something that the iPhone 5 accomplished in less than a week. Moreover, Samsung has estimated the Galaxy Note II’s lifetime sales at around 20 million, less than half of the number of iPhones sold last quarter! Clearly, the Galaxy Note is not popular enough (at least for now) to be a major drag on iPhone sales.

Second, while some users clearly want a larger phone, whether it is a full-blown phablet or a phone with a 4.7-inch to 5-inch screen, there is no moat protecting the producers of these phones. If Tim Cook and his team decide that they are losing sales by not having a larger phone, you can be sure that they will introduce a new model to capture that market. In the grand scheme of things, it will not make much difference for Apple Inc. (NASDAQ:AAPL) shareholders whether the company releases a 5-inch iPhone tomorrow or next year.