On CNBC yesterday, Dan Nathan of RiskReversal.com was talking about Apple Inc. (NASDAQ:AAPL)‘s stock movement, and how he thought the stock’s action was “pretty darned good” after losing less than a percentage point, on a day when Hewlett-Packard Company (NYSE:HPQ) pulled down most tech stocks. 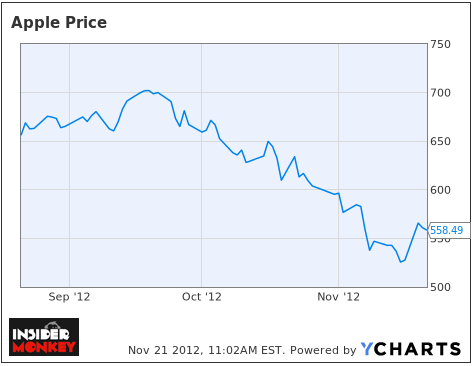 Nathan, who was joined by Jon Najarian of optionMONSTER.com, said that there are option strategies that can help investors “take some premium” out of the stock during the Thanksgiving Day holiday, and leading up to the weekend. Nathan said that there’s the possibility of a “decent rally next week” for Apple, but stated that he believes “600 [dollars] is the top, though.”

Nanjaran, known as the “Doc” to his avid followers, then expanded on a possible options strategy to use this week. He had this to say about what a good trade for Apple Inc. (NASDAQ:AAPL) may be:

“Selling the straddle in the near term – the one that expires this Friday […] you lose almost 80% of the value over the next couple days of this straddle, because you don’t have trading basically in two of those days […] Buy the next week out, straddle against it at the same strikes. That gives you time decay working in your favor big time, and if we sit […] and sort of jostle around that, uh, 20% up or down […] you make a lot of money on this trade, just over a couple of days.”

While shares of Apple Inc. (NASDAQ:AAPL) look to be cheap using nearly every metric under the sun, and bullish investors likely think that $600 isn’t a high enough price target for the tech giant, Nanjaran’s strategy may be useful to employ over the short run.

Over the longer term, we think that Apple is in need of a catalyst, so to speak, that can vault its shares up to a fairer value. Whether this comes in the form of a deal with China Mobile or confirmation of an Apple TV, it appears that the markets are searching for the company’s next big growth driver. Earnings expansion is slowing down – sell-side analysts expect AAPL’s EPS growth to average 20-21% over the next half-decade, compared to a +60% average the past five years – but it’s worth noting that this still trumps what is expected of Google Inc. (NASDAQ:GOOG) (15.7%) and Microsoft Corporation (NASDAQ:MSFT) (9.6%).

What are your thoughts? Is it worth employing an options strategy on Apple Inc (NASDAQ:AAPL) over the next couple weeks until a clear breakout is in order? Or is it better to get in now, sit on the stock and hope for a value-based appreciation over the longer term?

According to our database of over 400 hedge fund managers, Ken Griffin and Citadel Investment Group held a pretty massive long straddle position in Apple at the end of the third quarter, while guys like David Einhorn and Cliff Asness were long-only. For a complete look at the hedge fund industry’s sentiment toward AAPL, continue reading here.

Does Apple Inc (AAPL) Really Have an eBay Store?