How do you pick the next stock to invest in? One way would be to spend days of research browsing through thousands of publicly traded companies. However, an easier way is to look at the stocks that smart money investors are collectively bullish on. Hedge funds and other institutional investors usually invest large amounts of capital and have to conduct due diligence while choosing their next pick. They don’t always get it right, but, on average, their stock picks historically generated strong returns after adjusting for known risk factors. With this in mind, let’s take a look at the recent hedge fund activity surrounding Analog Devices, Inc. (NASDAQ:ADI).

Is Analog Devices, Inc. (NASDAQ:ADI) the right pick for your portfolio? Hedge funds are turning less bullish. The number of bullish hedge fund bets were trimmed by 1 in recent months. Our calculations also showed that ADI isn’t among the 30 most popular stocks among hedge funds.

Unlike the largest US hedge funds that are convinced Dow will soar past 40,000 or the world’s most bearish hedge fund that’s more convinced than ever that a crash is coming, our long-short investment strategy doesn’t rely on bull or bear markets to deliver double digit returns. We only rely on the best performing hedge funds‘ buy/sell signals. Let’s review the key hedge fund action surrounding Analog Devices, Inc. (NASDAQ:ADI).

How have hedgies been trading Analog Devices, Inc. (NASDAQ:ADI)?

Heading into the fourth quarter of 2019, a total of 43 of the hedge funds tracked by Insider Monkey were bullish on this stock, a change of -2% from one quarter earlier. The graph below displays the number of hedge funds with bullish position in ADI over the last 17 quarters. So, let’s check out which hedge funds were among the top holders of the stock and which hedge funds were making big moves. 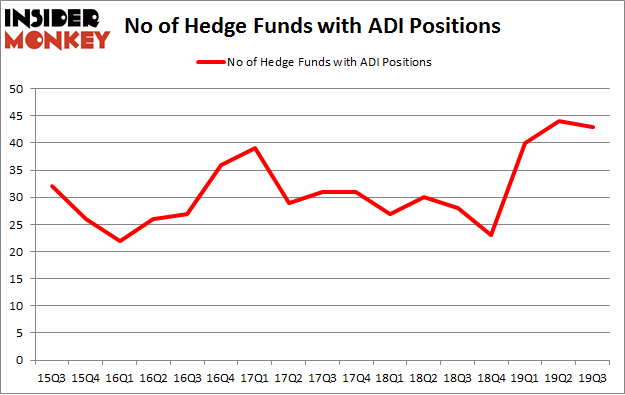 When looking at the institutional investors followed by Insider Monkey, William von Mueffling’s Cantillon Capital Management has the largest position in Analog Devices, Inc. (NASDAQ:ADI), worth close to $565.3 million, corresponding to 5.5% of its total 13F portfolio. The second most bullish fund manager is Generation Investment Management, led by David Blood and Al Gore, holding a $521.6 million position; 3.7% of its 13F portfolio is allocated to the stock. Remaining peers that hold long positions encompass Robert Rodriguez and Steven Romick’s First Pacific Advisors, Panayotis Takis Sparaggis’s Alkeon Capital Management and Phill Gross and Robert Atchinson’s Adage Capital Management. In terms of the portfolio weights assigned to each position Totem Point Management allocated the biggest weight to Analog Devices, Inc. (NASDAQ:ADI), around 13.6% of its portfolio. Harvey Partners is also relatively very bullish on the stock, designating 6 percent of its 13F equity portfolio to ADI.

Judging by the fact that Analog Devices, Inc. (NASDAQ:ADI) has experienced declining sentiment from the entirety of the hedge funds we track, we can see that there lies a certain “tier” of hedge funds who sold off their positions entirely heading into Q4. It’s worth mentioning that Alex Sacerdote’s Whale Rock Capital Management cut the largest position of the 750 funds watched by Insider Monkey, valued at about $132.2 million in call options. Brandon Haley’s fund, Holocene Advisors, also dropped its call options, about $46.3 million worth. These moves are interesting, as aggregate hedge fund interest fell by 1 funds heading into Q4.

As you can see these stocks had an average of 45.75 hedge funds with bullish positions and the average amount invested in these stocks was $2735 million. That figure was $2518 million in ADI’s case. HCA Healthcare Inc (NYSE:HCA) is the most popular stock in this table. On the other hand Emerson Electric Co. (NYSE:EMR) is the least popular one with only 37 bullish hedge fund positions. Analog Devices, Inc. (NASDAQ:ADI) is not the least popular stock in this group but hedge fund interest is still below average. This is a slightly negative signal and we’d rather spend our time researching stocks that hedge funds are piling on. Our calculations showed that top 20 most popular stocks among hedge funds returned 34.7% in 2019 through November 22nd and outperformed the S&P 500 ETF (SPY) by 8.5 percentage points. Unfortunately ADI wasn’t nearly as popular as these 20 stocks (hedge fund sentiment was quite bearish); ADI investors were disappointed as the stock returned -1% during the fourth quarter (through 11/22) and underperformed the market. If you are interested in investing in large cap stocks with huge upside potential, you should check out the top 20 most popular stocks among hedge funds as 70 percent of these stocks already outperformed the market in Q4.