AMETEK, Inc. (AME): Can This Industrial Take Off?

It’s been a mixed earnings season for industrial-based stocks and AMETEK, Inc. (NYSE:AME)’s last set of results provided a pretty good microcosm of what has been going on. In short, companies with heavy exposure to industries like automotive and aerospace have done well, while almost everything else has found things difficult. So what makes AMETEK, Inc. (NYSE:AME) interesting and what can we read across for other companies?

Ametek generates growth across the cycle

The company is attractive for a few reasons.Firstly although it is not a pure-play aerospace company, it has heavy exposure and as the industry is looking set for good long-cycle growth, it has good prospects. Secondly, AMETEK, Inc. (NYSE:AME) has long been a company categorized by its management’s ability to make earnings-enhancing acquisitions without damaging its return on invested capital (ROIC). 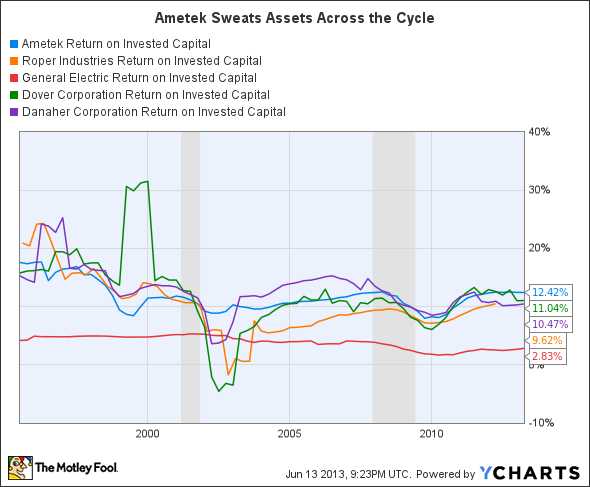 As the chart indicates, Ametek has done a pretty good job of consistently generating ROIC even when market conditions are not great. An acquisition-led growth strategy does have its advantages and disadvantages. On the plus side, the company can carry on generating growth by getting companies cheaper in the downswing (and benefiting from the hopeful upswing in the economy); but on the downside its management will be under pressure to make the right acquisitions. And making the wrong decision can occur irrespective of where the economy is positioned.

The good news is that AMETEK, Inc. (NYSE:AME)’s management has a strong track record in this regard and acquisitions are a key part of the focus for 2013 as well. Even in the latest Q1 results we saw organic sales decline 2% but acquisitions contribute 9% and –even in a weaker environment for aerospace- its sales were up 7%.

As ever with this type of company, cost management and lean manufacturing will be a strong focus. Indeed cost reductions were made in the quarter, without which, EPS would have been up 18%. There was good news on the cost-cutting front with estimates for total full-year savings rising to $95 million from $85 million previously. Operating cash flow rose 11% and full-year EPS guidance was raised at the low end to imply 11% to 13% growth. Moreover the commentary on linearity was positive with April cited as looking ‘good’. Like many in the industrial sector it saw some weakness in March.

As usual with earnings season, Alcoa Inc (NYSE:AA) tends to set the tone for the industrials. A brief look at the conclusions from its earnings reveals that areas like aerospace and automotive remain relatively positive. Europe remains weak on the whole and the heavy truck and trailer market is experiencing a sharp slowdown. Moreover much of Alcoa’s growth is predicated on stronger conditions in China. The surprising thing was that Alcoa Inc (NYSE:AA) did not alter its full-year end-demand outlook by much even though the consensus is that Q1 did get weaker overall for industrials.

Alcoa Inc (NYSE:AA)’s trends were confirmed by AMETEK, Inc. (NYSE:AME) when it discussed some softness in its power and industrial business created by the North American heavy truck market, so no surprises there. Furthermore within its process business segment the strongest performer was oil and gas while metals analysis revenue was relatively weaker.

The key strength in the business was from aerospace. Its electronic instruments group (EIG) saw aerospace (commercial, business and regional jets) revenue rise by low double digits and growth is expected to remain solid for the rest of the year inline with build-out rates at Boeing and Airbus. Overall EIG sales were up 3%.

It was a similar story in the other segment. The electromechanical group (EMG) saw its differentiated business sales up in the mid-teens with particular strength cited in its aerospace maintenance, repair and overhaul (MRO) operations. However, overall sales for EMG only rose 3% thanks to a 14% contribution from acquisitions.

Which stocks read across well?

Frankly I think investors should try and stick to the themes that are working well and try and find value in them. If aerospace and automotives are doing well and companies like Alcoa and AMETEK, Inc. (NYSE:AME) are confirming this, then why not stick to the idea? Three names that I like are HEICO Corporation (NYSE:HEI), Precision Castparts Corp. (NYSE:PCP) and PPG Industries, Inc. (NYSE:PPG).