American Financial Group, Inc. (NYSE:AFG) was in 24 hedge funds’ portfolios at the end of September. AFG has seen an increase in hedge fund interest recently. There were 17 hedge funds in our database with AFG positions at the end of the previous quarter. Our calculations also showed that AFG isn’t among the 30 most popular stocks among hedge funds. 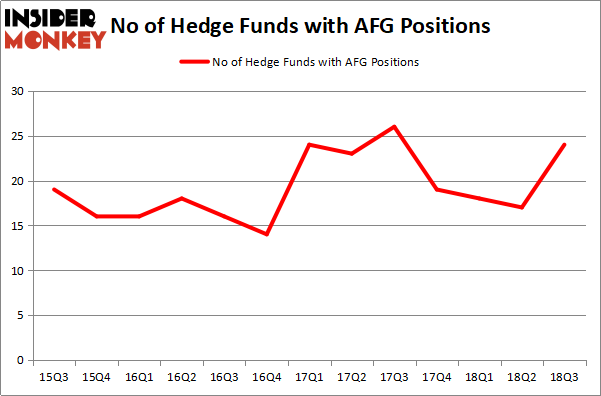 When looking at the institutional investors followed by Insider Monkey, AQR Capital Management, managed by Cliff Asness, holds the largest position in American Financial Group, Inc. (NYSE:AFG). AQR Capital Management has a $164.5 million position in the stock, comprising 0.2% of its 13F portfolio. On AQR Capital Management’s heels is Renaissance Technologies, managed by Jim Simons, which holds a $62.6 million position; the fund has 0.1% of its 13F portfolio invested in the stock. Some other peers that hold long positions comprise Daniel Johnson’s Gillson Capital, Israel Englander’s Millennium Management and Noam Gottesman’s GLG Partners.

Consequently, key hedge funds were leading the bulls’ herd. Arrowstreet Capital, managed by Peter Rathjens, Bruce Clarke and John Campbell, assembled the most outsized position in American Financial Group, Inc. (NYSE:AFG). Arrowstreet Capital had $12.4 million invested in the company at the end of the quarter. Gregg Moskowitz’s Interval Partners also made a $7 million investment in the stock during the quarter. The other funds with new positions in the stock are D. E. Shaw’s D E Shaw and Frederick DiSanto’s Ancora Advisors.

As you can see these stocks had an average of 22.75 hedge funds with bullish positions and the average amount invested in these stocks was $982 million. That figure was $334 million in AFG’s case. Nielsen Holdings plc (NYSE:NLSN) is the most popular stock in this table. On the other hand Huaneng Power International Inc (NYSE:HNP) is the least popular one with only 4 bullish hedge fund positions. American Financial Group, Inc. (NYSE:AFG) is not the most popular stock in this group but hedge fund interest is still above average. This is a slightly positive signal but we’d rather spend our time researching stocks that hedge funds are piling on. In this regard NLSN might be a better candidate to consider a long position.