Hedge funds and high-level insiders are inherently in the know when it comes to their investment decisions. Generally speaking, the former has greater access to in-depth equity research than the average retail investor, particularly in the small-cap space. Moreover, transactions made corporate executives—especially when they’re bullish—send clear “buy” signals if you recognize where to look.

How do we know this? 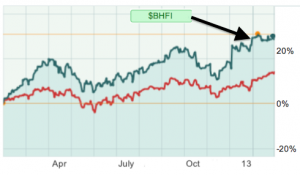 At Insider Monkey, we teamed up with MarketWatch to create the Billionaire Hedge Fund Index, which returned 24.3% last year versus 16% for the S&P 500 ETF (NYSEARCA:SPY). Historically speaking, imitating hedge funds’ top picks has outperformed the market by 2 percentage points annually, and their most popular small-cap investments generated an outperformance of more than 15 percentage points a year (check out how to use this strategy yourself).

Moreover, our research on insider buying indicates that a similar market-beating potential exists, of about 7 percentage points per year on average (details here). Keeping this in mind, it’s useful to parse mega-hedge fund managers’ stock picks down to those that have positive insider sentiment.

When we use the term “smart money,” one can reasonably infer that Warren Buffett is one of the smartest, if not the smartest of his peers. Buffett’s Berkshire Hathaway serves as a great blueprint for long-term investors, and the holding company’s stock itself has been a beast of an investment as well. Using our database of quarterly 13F filings from the SEC, we can discern which of Buffett’s stock picks have had at least one insider buy over the past 90 days (see Warren Buffett’s favorite investments).

Now, it’s no secret that Buffett prefers to hold a relatively concentrated equity portfolio, but it may surprise you that of his 38 long positions, only five have seen insider buying activity over the past three months. This ratio, which is relatively consistent with NYSE and NASDAQ averages, indicates that this group is extra special. Without further ado, let’s reveal this “fab five.”

American Express Company (NYSE:AXP) is a mainstay in Buffett’s top five 13F holdings, and has generated solid returns post-recession and more recently as well. Shares of the credit and lending behemoth have gained nearly 16% over the past year, as the company itself has generated earnings beats in four of its past five quarters. Director Jan Leschly bought a little over 70,000 shares last November, the largest AXP insider purchase we have on record (see full history).

DaVita HealthCare Partners Inc (NYSE:DVA) is another favorite of Buffett; he’s upped his stake in this dialysis service company in three consecutive quarters since initiating the position back in Q4 2011. The primary bullish thesis behind DaVita is its ability to ride existing healthcare tailwinds to top and bottom line prosperity. The sell-side estimates accelerating earnings growth, at 13%-14% annually over the next five years. DaVita’s ability to generate consistent free cash flow also opens up the door for more acquisitions down the road. Berkshire, which is classified as a “large shareholder” by the SEC and is therefore technically an insider as well, now holds more than 14 million shares (see the full history here).

Liberty Media Corp (NASDAQ:LMCA), meanwhile, was a new position for Buffett in the fourth quarter of 2011, and cracked his top 20 last summer. The company spun off Starz (NASDAQ:STRZA) in the second week of January, and about three weeks earlier, Chairman John Malone bought a whopping 490,000 shares. Now spun off from under the Liberty umbrella, Starz should have quite a bit of interest in the hedge fund industry in addition to Buffett, including Steve Cohen, Jim Chanos and David Einhorn (see David Einhorn’s favorite stock picks).

General Motors Company (NYSE:GM) has seen multiple insiders purchasing shares over the past six months, and when we shrink this time frame down to 90 days, Director Thomas Schoewe comes into focus. Schoewe bought close to $100,000 worth of GM in early November, and since then, shares have risen 11.5%. At the moment, investors are eagerly awaiting the automaker’s Q4 earnings report on Valentine’s Day next week. GM has beaten Wall Street’s top and bottom line estimates in four of the past five quarters, and currently trades at a sub-1.0 PEG and is near parity with its book value per share.