Investors were worried about the jobs report after Wednesday’s private-sector payrolls report disappointed and depressed Dow stocks. The government’s nonfarm payroll report showed that the economy added 175,000 jobs in May, beating expectations of 164,000 additional jobs. 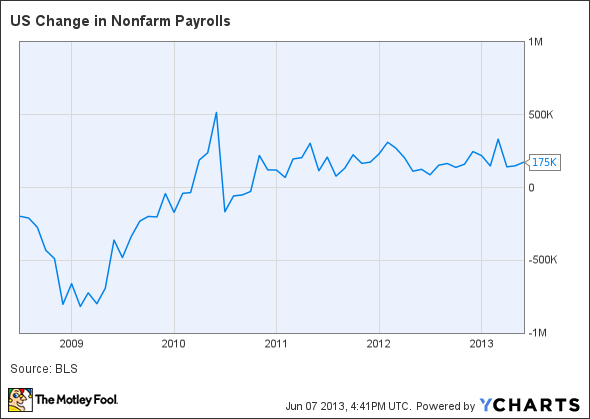 The jump in job creation was not enough to stop a rise in the unemployment rate to 7.6%, but that uptick was the result of more people entering the labor market. This is positive for the economy, as it means more people feel they can find a job. And a higher unemployment rate is good for asset prices, because it means the Fed will keep up its asset purchases. Currently, the Federal Reserve is buying $85 billion of long-term assets every month — $45 billion of long-term Treasuries and $40 billion of mortgage-backed securities. The Fed has said that it will continue the purchases until inflation rises above 2% or unemployment falls below 6.5%. Inflation is currently running around 1%, and expectations for inflation going forward, per the TIPS spread — the difference between the yields on Treasury Inflation Protection Securities and the nominal U.S. Treasury bond yield — is 2% for the next five years.