The Dow Jones Industrial Average (INDEXDJX:.DJI) has gone well beyond its industrial roots to encompass a wide assortment of companies from different industries. That has helped the Dow become a broad-based measure not only of the industrial sector but of the entire stock market.

In particular, financial stocks play an important role in the Dow Jones Industrial Average (INDEXDJX:.DJI), with several components focusing on banking, insurance, and other financial services. Let’s take a look at how these companies have fared so far in 2013 and what their prospects are for the rest of the year and beyond. 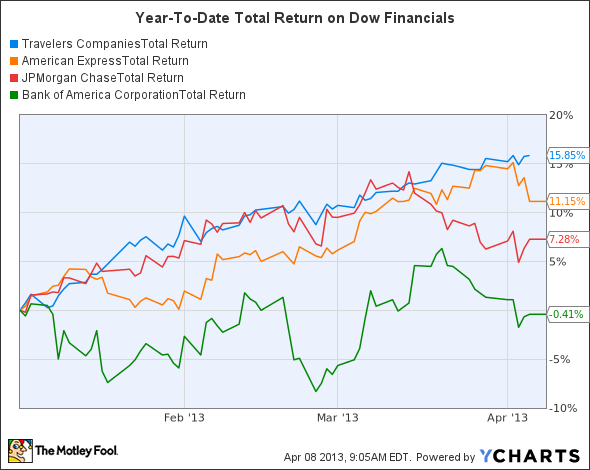 At first glance, it may seem strange to see Travelers Companies Inc. (NYSE:TRV) topping this list. After all, the company has had to deal with two straight years of substantial losses, with hurricanes Irene and Sandy leaving massive destruction in their wake. But one thing to remember about insurance is that losses can actually help insurance companies in the long run, giving them room to raise premiums and boost longer-term profits.

American Express Company (NYSE:AXP) has seen good gains as its Bluebird prepaid-card initiative has started to pay off. So far, AmEx has drawn in nearly half a million brand-new customers with Bluebird, showing that the card is meeting AmEx’s goal of hitting a totally different demographic from its high-end premium card offerings. Moreover, as prepaid cards have no credit risk at all, AmEx stands to reap the rewards of transaction-based income with no downside.

Why the banks are lagging
JPMorgan Chase & Co. (NYSE:JPM) and Bank of America (NYSE:BAC) haven’t done as well as the other financial stocks in the Dow Jones Industrial Average (INDEXDJX:.DJI). Both big banks have clearly suffered long-term reputational damage from the financial crisis and their efforts to recover, and questionable foreclosure practices have led to ongoing legal battles and high-priced settlements with regulators and government entities, as well as private companies such as mortgage-insurance firms.

Looking forward, banks could continue to see pressure as long-awaited foreclosure activity finally picks up in states that require more lead time for their legal procedures. By contrast, so long as 2013 proves to be a more typical year for catastrophic losses, Travelers Companies Inc. (NYSE:TRV) stands to benefit from higher rate income. The big winner could be AmEx, especially if early trends to broaden its customer base continue to work well.

The article How the Dow’s Financial Stocks Have Fared in 2013 originally appeared on Fool.com.