Does American Electric Power Company, Inc. (NYSE:AEP) represent a good buying opportunity at the moment? Let’s briefly check the hedge fund interest towards the company. Hedge fund firms constantly search out bright intellectuals and highly-experienced employees and throw away millions of dollars on research activities, so it is no wonder why they tend to generate millions in profits each year. It is also true that some hedge fund players fail inconceivably on some occasions, but their stock picks have been generating superior risk-adjusted returns on average over the years.

American Electric Power Company, Inc. (NYSE:AEP) was in 36 hedge funds’ portfolios at the end of September. AEP shareholders have witnessed an increase in support from the world’s most elite money managers in recent months. There were 26 hedge funds in our database with AEP holdings at the end of the previous quarter. Our calculations also showed that AEP isn’t among the 30 most popular stocks among hedge funds.

What does the smart money think about American Electric Power Company, Inc. (NYSE:AEP)?

At Q3’s end, a total of 36 of the hedge funds tracked by Insider Monkey held long positions in this stock, a change of 38% from the second quarter of 2018. Below, you can check out the change in hedge fund sentiment towards AEP over the last 13 quarters. So, let’s review which hedge funds were among the top holders of the stock and which hedge funds were making big moves. 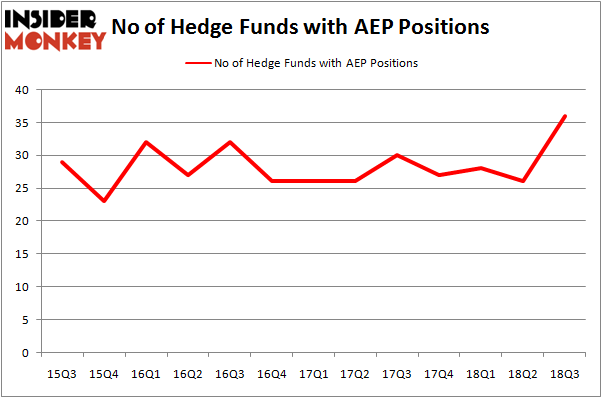 With a general bullishness amongst the heavyweights, specific money managers have jumped into American Electric Power Company, Inc. (NYSE:AEP) headfirst. Covalis Capital, managed by ZilvinasáMecelis, created the most outsized position in American Electric Power Company, Inc. (NYSE:AEP). Covalis Capital had $17.2 million invested in the company at the end of the quarter. Jeffrey Talpins’s Element Capital Management also initiated a $3.7 million position during the quarter. The other funds with new positions in the stock are Paul Tudor Jones’s Tudor Investment Corp, Ian Simm’s Impax Asset Management, and Mike Vranos’s Ellington.

Let’s now take a look at hedge fund activity in other stocks – not necessarily in the same industry as American Electric Power Company, Inc. (NYSE:AEP) but similarly valued. These stocks are ServiceNow Inc (NYSE:NOW), The Travelers Companies, Inc. (NYSE:TRV), Anadarko Petroleum Corporation (NYSE:APC), and Equinix, Inc. (REIT)(NASDAQ:EQIX). All of these stocks’ market caps are closest to AEP’s market cap.

As you can see these stocks had an average of 44.25 hedge funds with bullish positions and the average amount invested in these stocks was $2.3 billion. That figure was $1.26 billion in AEP’s case. ServiceNow Inc (NYSE:NOW) is the most popular stock in this table. On the other hand The Travelers Companies, Inc. (NYSE:TRV) is the least popular one with only 26 bullish hedge fund positions. American Electric Power Company, Inc. (NYSE:AEP) is not the least popular stock in this group but hedge fund interest is still below average. This is a slightly negative signal and we’d rather spend our time researching stocks that hedge funds are piling on. In this regard NOW might be a better candidate to consider a long position.