In the small-cap sector, I have located three companies that are producing strong cash flows relative to their share price in addition to having strong fundamentals.  These stocks may provide deep value to investors.

How to find these stocks

My screen had the following criteria:

The candidates this screen produced were American Axle & Manufact. Holdings, Inc. (NYSE:AXL), Carmike Cinemas, Inc. (NASDAQ:CKEC), and Nexstar Broadcasting Group, Inc. (NASDAQ:NXST). The following is a chart of the companies’ share price performance over the past year compared against that of the S&P 500. 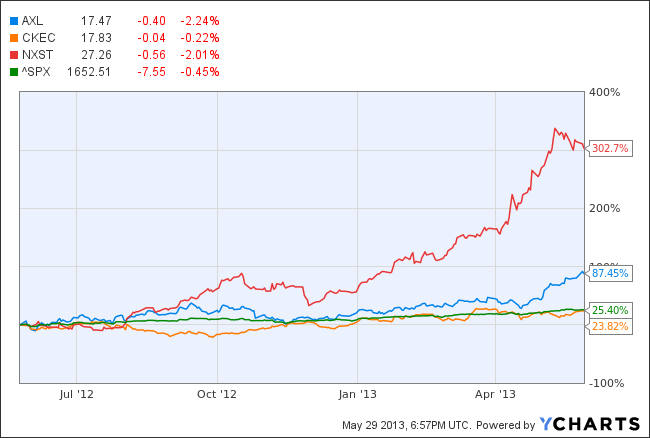 As the chart shows, these companies have performed extremely well collectively over the past year.  This can be expected due to their strong fundamentals which are as a result of good financial performance.

Over the past year, American Axle & Manufact. Holdings, Inc. (NYSE:AXL)’s return has tripled that of the S&P 500.  Last week it reached a new 52-week high of $17.93 per share.  Analysts expect the company to earn $1.76 per share this year, which would be up from $1.20 per share last year.  Next year, earnings are expected to jump to $2.66 per share.  Over the next five years, its annual growth rate is forecasted to be 22.5%.  Recently, earnings estimates have been increased for all of the company’s future releases.

In the quarter that ended in March of 2013, the company earned $0.23 per share, which beat the consensus estimate calling for $0.16 per share in earnings.  The company supplies parts for General Motors and Chrysler, and the Detroit-based business saw better than expected results from these operations in the first quarter.  For instance, full-sized pickup sales are up 24% this year so far through April.

In looking at the company’s first quarter results, it is noted that General Motors makes up the majority of its revenue.  A key initiative achieved in the quarter was the fact that the company successfully restructured some of its higher interest debt by issuing new $400 6.25% senior notes due in 2021.  This is part of its move to shore up its balance sheet.

Sales increased by a modest 1% and were partially affected by the labor strike at one of GM’s factories.  Its content-per-vehicle (dollar value of its products to its customers) increased to $1,504 per vehicle in March of 2013 from $1.75 per vehicle in March of 2012.  General and administrative expenses also decreased modestly, which helped profits. Continuing increases in sales of American cars and a rebounding housing market can fuel further sales gains.

The View of Carmike Cinemas

Carmike Cinemas, Inc. (NASDAQ:CKEC) is currently trading at $17.75 per share and is close to its 52 week high.  Despite being the weakest performing stock out of the three highlighted here, the company has been a strong performer over the past year.

We may use your email to send marketing emails about our services. Click here to read our privacy policy.
Related Insider Monkey Articles
Should We Follow Steven Cohen Into Nexstar Broadcasting Group, Inc. (NXST)?