Amazon.com, Inc. (AMZN): When Will The Madness End?

Amazon.com, Inc. (NASDAQ:AMZN) reported its fourth quarter results earlier this week, with revenue growing by 22% and gross margins higher than expected. Net income for the quarter was $97 million, or $0.21 per share. These results put the full year revenue at just over $61 billion, 27% growth from $48 billion in 2011.

Of the three quantities mentioned above – revenue, gross margin, and net income – analysts seem to only care about two of them when it comes to Amazon. They point to the relentless revenue growth and to the surprise jump in gross margin while casting off net income as a non-issue. Investors apparently agreed, sending Amazon shares soaring the next day.

And thus another chapter in the nonsensical journey of Amazon stock is written. I wrote previously about Amazon’s crazy valuation, but now I’d like to compare the company to two other giant retailers – Wal-Mart Stores, Inc. (NYSE:WMT) and Target Corporation (NYSE:TGT).

Amazon has been growing revenue at an astounding rate for the last decade while Wal-Mart and Target have settled between 3-5% growth. 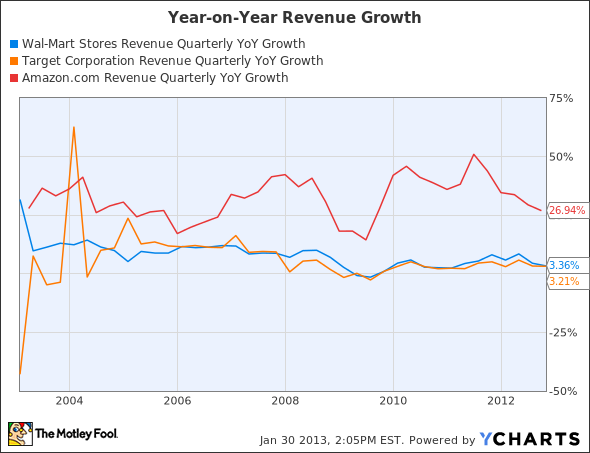 Amazon and Target now have similar annual revenues, with Amazon around $60 billion and TGT around $70 billion. Wal-Mart is much larger with annual revenue around $460 billion. 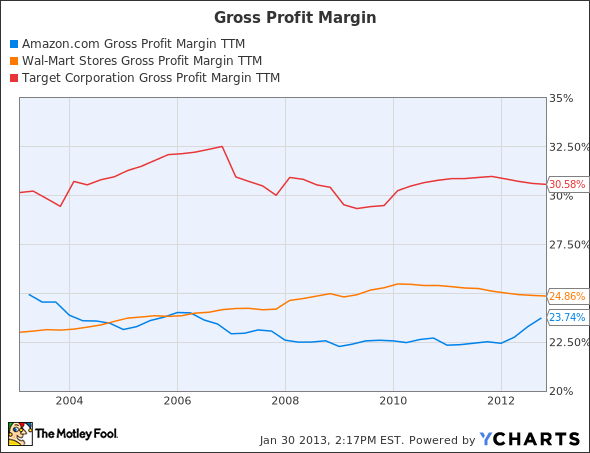 This means that Amazon makes less money on each product sold than both Wal-Mart and Target. This makes sense given Amazon’s drive to offer the lowest prices.

This is where things turn sour for Amazon. While Wal-Mart maintains an operating margin of about 6% and Target about 7.5%, Amazon’s operating margin dropped to just 1.8% in 2011 and to 0.9% in the TTM period. 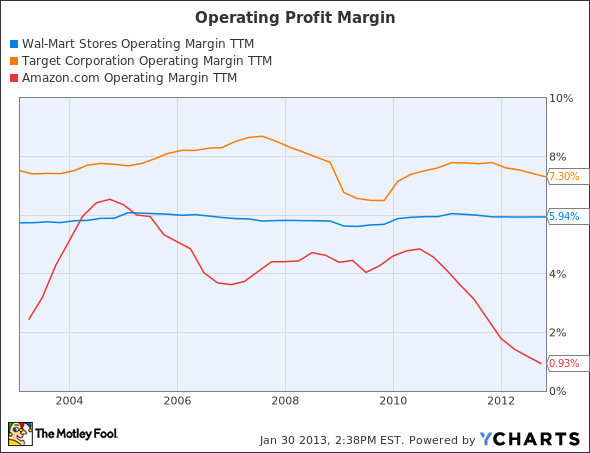 Amazon is sacrificing profitability for revenue growth. There can never be 20+% revenue growth AND high margins at the same time for Amazon, especially now that the company is much larger than it was a decade ago. It’s one or the other. An interesting article on Seeking Alpha proposes that Amazon’s sales growth in states where the company was forced to start charging sales tax was reduced substantially. This makes sense, since a lack of sales tax gave Amazon an automatic price advantage of 6-9% over traditional retailers. Further evidence of this trend is seen in this article from Reuters claiming that Best Buy Co., Inc. (NYSE:BBY) saw an above-average increase in online sales in states where Amazon recently started charging sales tax.