Amazon.com, Inc. (AMZN): What to Expect, What Not to Expect This Quarter

With its earnings release just around the corner, Amazon.com, Inc. (NASDAQ:AMZN) has a chance to ease investors’ fears, justify its lofty valuation, and support the many bullish analysts. There are reasons to expect Amazon will placate both shareholders and analysts in Q1, but it won’t be because CEO Jeff Bezos and team knocked earnings out of the park: That’s just not likely to happen — yet. But there are other ways to measure whether Amazon merits your investment consideration.

What to expect when you’re expecting
Amazon trades at multiples that are downright scary; not Netflix, Inc. (NASDAQ:NFLX) scary, but frightening nonetheless. Average analyst estimates for fiscal year 2013 suggest Amazon will earn $1.41 a share, equal to 187 times expected earnings. Even after all these years, Amazon remains the epitome of a growth stock. But does Bezos warrant the freedom that analysts and investors seem to have given him over the years? Yes, and there are several reasons why. 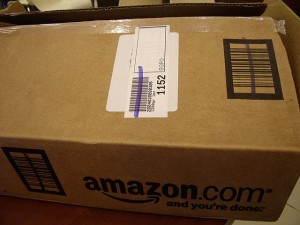 Don’t expect earnings in Amazon.com, Inc. (NASDAQ:AMZN)’s Q1 announcement after the close on April 25 to compare favorably with either last quarter’s $0.21 a share, or 2012’s Q1 earnings of $0.28. Bezos and team have made it clear they’re committed to investing in Amazon’s future, and that’s not changing any time soon. Amazon CFO Tom Szkutak put it mildly when he said that “we’re investing a lot in the business right now.” And with plans to open another 12 distribution centers this year, the spending and near-term decline in earnings is likely to continue.

With the negative impact expenses are having on Amazon’s earnings, the question is how to know if it’s working. The answer: margins. Improving margins will determine whether Amazon’s open checkbook policy is successful; the objective behind Amazon’s spending spree is to build a more efficient business, and better margins measure just that. Toward that end, Amazon’s North American operating margin jumped to 5% last quarter, compared with 2011’s Q4 operating margin of just 2.9%. Ongoing investment in technology and distribution centers translated into a more efficient Amazon last quarter, and we should see more of the same in Q1.

Another area to keep an eye on is the geographic revenue diversification of Amazon.com, Inc. (NASDAQ:AMZN)’s North America and international units. Last quarter’s $12 billion in domestic sales was offset by the $9 billion Amazon generated overseas — a good balance, to be sure. As the U.S. markets gain traction, how well will Amazon keep pace with its international operations? Don’t be surprised to see revenue growth both here and abroad in Q1, though matching last quarter’s 20% jump in non-domestic revenues might be a stretch.

So, now what?
Amazon is notoriously circumspect when announcing earnings and sales specifics, making it difficult to gauge growth in each of its business lines. But like Amazon’s geographic diversification, its multiple revenue streams will continue to support long-term initiatives, even when those initiatives put it directly in the line of fire of some heavy hitters.