Amazon.com, Inc. (NASDAQ:AMZN) is not worried about generating income through its membership fees–or is it? The company is spending millions of dollars for the purpose of providing original content. Will they generate revenue from subscriptions? Yes, but that isn’t the goal of the company. Amazon.com, Inc. (NASDAQ:AMZN)’s goal is much deeper than simply acquiring revenues from these subscriptions.

Netflix, Inc. (NASDAQ:NFLX) is often given credit for starting a new way of viewing TV shows. Hulu Plus was quick to follow, and now Amazon is giving it a shot. Amazon Prime members will pay an annual $79 and receive many “benefits,” which include free two-day shipping and several new TV shows that Amazon is producing. So, what exactly is Amazon’s goal?

Simply put, they want to maximize revenues not from their subscriptions, but because of their subscriptions. The Huffington Post cites a recent Morningstar study that showed, “Prime members shop more frequently than non-members, spend twice as much annually and tend to buy more expensive products.” Although Amazon.com, Inc. (NASDAQ:AMZN) won’t release how many subscribers it has, Morningstar estimates 10 million Amazon Prime account holders. By 2017, that figure is expected to grow to over 25 million.

This explains why Amazon is willing to charge about $1.42/month less than either Hulu or Netflix, Inc. (NASDAQ:NFLX). Amazon.com, Inc. (NASDAQ:AMZN)’s market cap is nearly ten times that of Netflix, Inc. (NASDAQ:NFLX), but both companies have seen revenues increase annually for more than a decade. Is there still a market for these type of services? You better believe it. In fact, according to Nielson, the average household watches over eight hours of television every day.

It is believed that Amazon.com, Inc. (NASDAQ:AMZN) is working to develop a streaming box, similar to that of the Apple Inc. (NASDAQ:AAPL) TV or Roku. Now, the Apple Inc. (NASDAQ:AAPL) TV may not seem to generate much revenue stream for the company, as it accounted for less than 0.5% of Apple’s 2012 revenues. That may not seem like much, but for a company that brought in over $156.5 billion in 2012, the Apple TV accounted for approximately $720 million. If Amazon can successfully develop, release, and sell some of these streaming boxes, revenues could receive another boost. 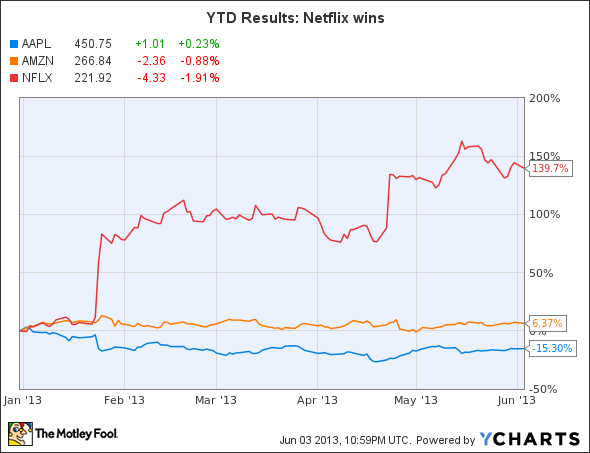 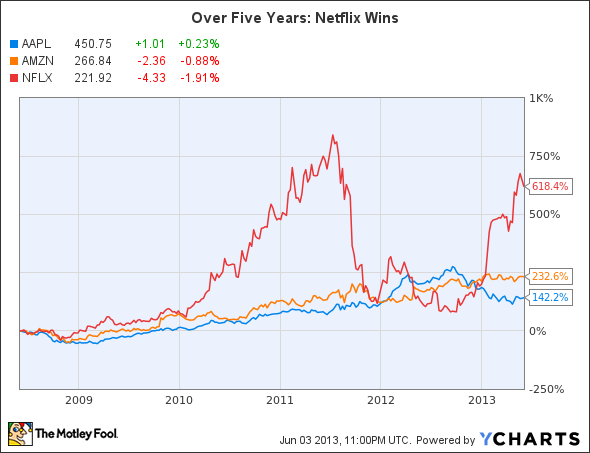 According to Morningstar, the economic moats of these companies vary greatly. Netflix, Inc. (NASDAQ:NFLX) doesn’t have one, Apple Inc. (NASDAQ:AAPL)’s is narrow, and Amazon’s is wide. I don’t think a lot of the typical metrics apply to Amazon.com, Inc. (NASDAQ:AMZN), but I do believe that if you look at the whole picture it is fairly priced for three reasons:

Apple Inc. (AAPL): Could There Be Another Low-Cost Device in the Works?

Google Inc (GOOG): Sponsored Search Can Now Have This Feature

Apple Inc. (AAPL) Is Not Another Computer Company: Part 3