Investors love stocks that consistently beat the Street without getting ahead of their fundamentals and risking a meltdown. The best stocks offer sustainable market-beating gains, with robust and improving financial metrics that support strong price growth. Does Wal-Mart Stores, Inc. (NYSE:WMT) fit the bill? Let’s take a look at what its recent results tell us about its potential for future gains.

The graphs you’re about to see tell Wal-Mart Stores, Inc. (NYSE:WMT)’s story, and we’ll be grading the quality of that story in several ways: 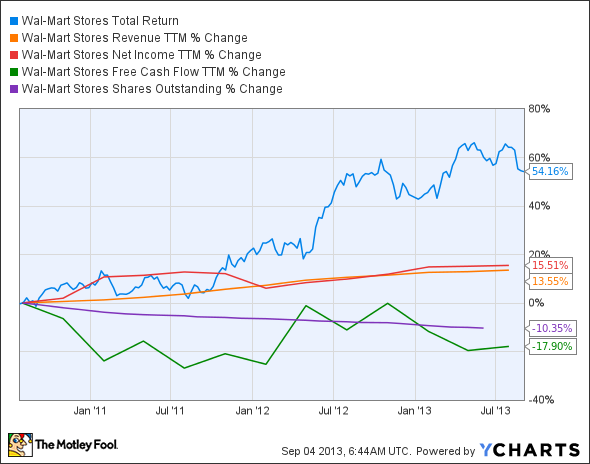 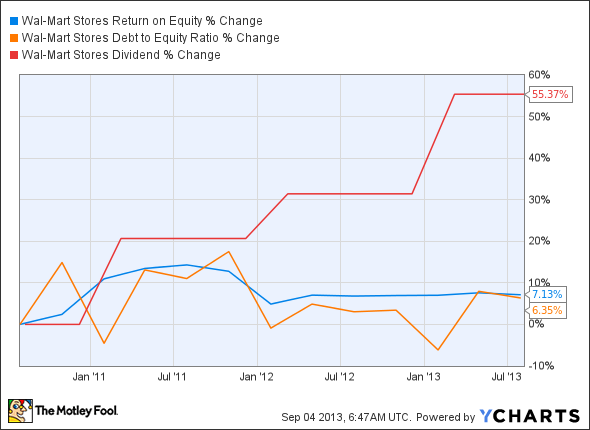 Wal-Mart Stores, Inc. (NYSE:WMT) got off to a wobbly start, hurt by modest revenue growth and declining free cash flow. However, the company continues to improve its bottom-line metrics, and might have earned more than five out of nine passing grades if not for a slight debt uptick, and investor enthusiasm that’s just barely nudged shares beyond their fundamental growth rates. Let’s dig a little deeper to see what Wal-Mart is currently doing to put together an even better performance next year.

Fool contributor Marie Palumbo notes that Wal-Mart Stores, Inc. (NYSE:WMT) had been trying to replicate Amazon.com, Inc. (NASDAQ:AMZN)‘s e-commerce business model. However, Wal-Mart’s online sales amounted to $7.7 billion, which is a rather tiny sliver of its gargantuan total revenue. The entire domestic online retail sector grew by 16%, to $224.3 billion last year, and Amazon.com, Inc. (NASDAQ:AMZN) is still managing to outpace that growth despite accounting for roughly a quarter of the entire take. Wal-Mart also has lofty plans to establish more warehouses, especially for processing online orders, from which it will ship products out of the excess inventory available in its stores. Wal-Mart has also been aggressively expanding its geographical presence in the international markets, and since Amazon.com, Inc. (NASDAQ:AMZN)’s international presence remains modest, this could be a bigger long-term online opportunity for the retail giant.

Wal-Mart’s entry into the Indian retail market could result in a long-term revenue driver, as it is a massive market with more than 1.2 billion people. My Foolish colleague Jeremy Bowman notes that the company has also advanced a proposal to operate supermarkets in India. Over in that other Eastern country with a billion people (China), Wal-Mart has bought 51% stake in Yihaodian, an e-commerce company, to scale up its online sales business. The company also has an ambitious plan to open 100 new stores in China over the next three years. Fool contributor Eileen Rojas notes that the Chinese retail market could reach $5 trillion by 2016. Even a 1% stake in that would be worth $50 billion to Wal-Mart’s top line.