The investment community appears to be confident that these heavy capital expenditures have paved the way for rapid growth going forward. Thus far, there is not much evidence to support that contention. Amazon’s sluggish growth in operating cash flow can perhaps be blamed upon the rapid addition of distribution centers, which generate operating expenses upon opening, but may not be fully utilized for years. However, Amazon’s slowing revenue growth is more troubling. 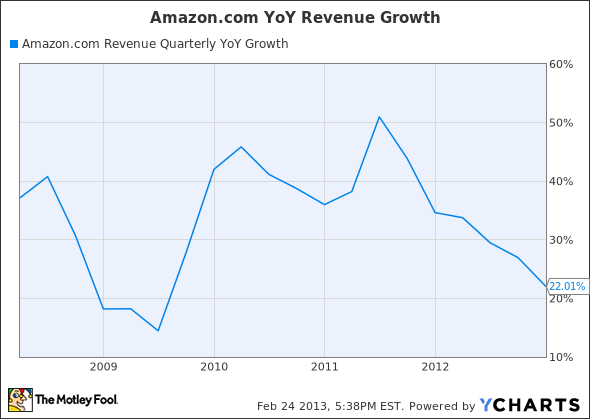 While revenue grew 39.6% in 2010 and 40.5% in 2011, growth dropped off to 27% in 2012 despite the increasing pace of investment. Revenue growth hit a multiyear low of 22% in the fourth quarter, and Amazon projected a similar level of growth for the current quarter.

Discount retailers like Wal-Mart, Target, and Best Buy are thus stepping up price competition with Amazon. As I discussed in a previous article, these three companies are equivalent in scale to Amazon (and Wal-Mart is nearly eight times larger) and have competitive operating expenses. Amazon thus has little or no inherent competitive advantage versus Wal-Mart, Target, or Best Buy. With these discounters having now implemented better strategies for competing against Amazon, the latter will have a tougher time gaining market share in the future.

Conclusion: The jury’s out
There are good reasons to doubt that Amazon will produce as much profit as investors seem to expect. Competitors are fighting back, and Amazon’s heavy investments over the past three years have not borne fruit in the form of better sales or earnings trends yet. It is possible that Amazon will eventually hit a tipping point, leading to a rapid rebound in profitability and accelerating revenue growth. However, until that happens, it is too early to crown Jeff Bezos the greatest CEO alive.

Amazon may be the king of the retail world right now, but at its sky-high valuation, most investors are worried it’s the company’s share price that will get knocked down instead of its competitors’. We’ll tell you what’s driving the company’s growth, and fill you in on reasons to buy and reasons to sell Amazon in our Motley Fool premium report. We’ll also be providing a full year of free analyst updates to keep you informed as the company’s story changes, so click here now to read more.

The article Is Jeff Bezos the Greatest CEO Alive? originally appeared on Fool.com and is written by Adam Levine-Weinberg.

Partnering In China Can Turn Into A Wild West Shoot Out: Caterpillar Inc. (...