In the January/February issue of the Harvard Business Review, three scholars from INSEAD in France compiled a ranking of the 100 best CEOs in the world who took office between 1995 and 2010. While Steve Jobs of Apple Inc. (NASDAQ:AAPL) unsurprisingly garnered the top spot, Amazon.com, Inc. (NASDAQ:AMZN) founder and CEO Jeff Bezos was ranked No. 2. Due to Jobs’ untimely passing in 2011, that makes Bezos the greatest CEO alive, according to the HBR study.

There is no doubt that Jeff Bezos belongs on a list of the top 100 CEOs of our time. In less than two decades, he built Amazon from nothing into one of the largest retailers in the world, and has also branched out into consumer electronics (particularly with the Kindle Fire) and cloud computing (through Amazon Web Services). On the other hand, the HBR study focused on stock performance, which is at best an imperfect measure of CEO performance, and may overstate Bezos’ accomplishments. Jeff Bezos has done a great job of growing Amazon’s revenue and share price, but not its profit or cash flow. Amazon’s high share price indicates that investors believe the company’s strategy will eventually lead to high profits, but there is no guarantee that Amazon will follow through. As a result, it is too early to put Bezos on par with Steve Jobs.

The ranking system
The authors’ goal was to create an objective measure of long-term CEO performance. To judge CEO performance, the authors measured total shareholder returns and increase in market capitalization over each CEO’s tenure. The authors rejected subjective measures of performance, as well as measures that were not comparable across industry groups: “Other metrics, such as sales, profitability, and innovation rates, are useful, too, but they differ by industry, which makes comparisons difficult.”

Amazon’s current market capitalization of approximately $120 billion makes a compelling case for putting Bezos at the top of the list of best CEOs. However, in an interview with HBR editor Adi Ignatius, Bezos himself cites legendary investor Ben Graham’s statement: “In the short term, the stock market is a voting machine. In the long term, it’s a weighing machine.” If we look back just a little more than four years, Amazon’s market capitalization was less than $25 billion. 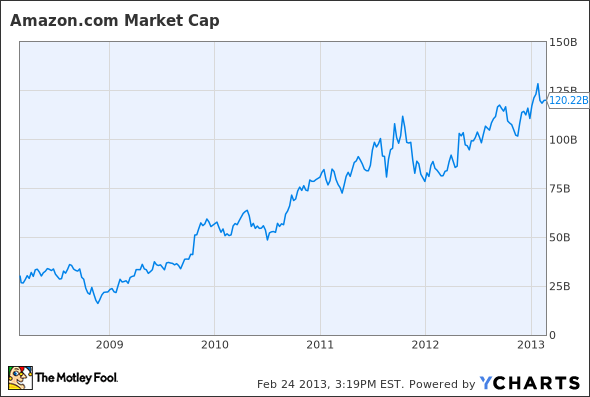 If the study had been performed four years earlier, Bezos would not have fared nearly as well. This merely highlights that stock performance itself is an inherently subjective measure in the short term. To better evaluate Bezos’ performance, it is critical to look at trends in cash flow and profitability, as well as revenue, because Amazon’s stock price will be unsustainable without growth in these key metrics.

Amazon’s growth trend
In the HBR interview, Bezos states that Amazon does not try to optimize its profit margin, but instead seeks to maximize long-term free cash flow. Amazon saw consistent growth in this metric for most of the last decade, but free cash flow has dropped precipitously over the past few years after peaking just below $3 billion in 2009. 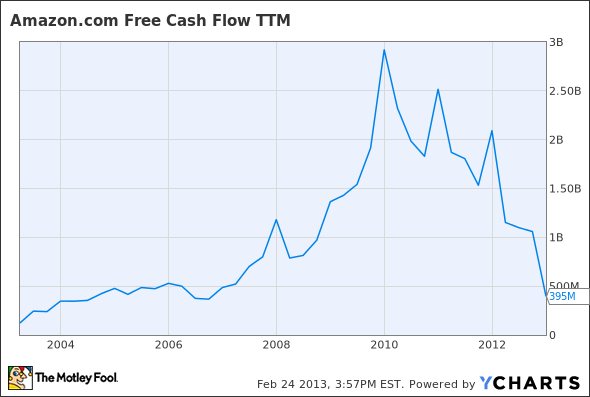