Amazon.com, Inc. (AMZN), Bank of America Corp (BAC): Admit it – You’re Losing To the Market, and It’s Your Own Fault

Individual investors tend to do poorly when we go it alone, underperforming the market, if not outright losing money. Add in that maybe more than 70% of the thousands of mutual funds out there also underperform the market, and it leaves many wondering if the system is rigged against us “little guys.” And if it is, why bother investing in the market at all?

And while some would argue that may be the case, that’s not the reason we can’t beat the market: it’s our own fault. But there is hope, and I’ll give you some ideas that can make all the difference.

The so-called experts that run most mutual funds also can’t beat the market, and are often derided for this. I think at times this is unfair, because it’s not their fault. The truth?

You won’t let them.

Mutual fund managers only control when they can buy a stock. Investors like you and me decide when they have to sell.  Let me explain.

Let’s take American Funds Growth Fund of America A (NASDAQMUTFUND:AGTHX) as an example. Over the past 20 years it has returned over 200%, while the S&P 500 and Dow have returned over 250% and over 320%, respectively. Fees have had an impact on its long-term performance, but much of its underperformance over the past two decades is a result of behaviors by individual investors in the fund, which means you.

Your 401(k) is down 20% from the market’s peak in less than a year. You see headlines like the one above every day. You decide to move out of “risky” investments and into bonds, forcing the fund managers at American Funds to sell stocks when you wanted them to. They have to pay your 401(k) back in cash so you can use it to buy those bond funds. Guess what? You just made the “sell” call.

Multiply your cold feet by how many other tens of thousands of people get spooked, and this is what crashes markets, creating a “feedback loop” of more selling, heavily influenced by Main Street investors selling out of those risky mutual funds. This creates more panic and selling, which forces yet more selling.

It’s like pulling the airline pilot out of the cockpit when the engine fails, and grabbing the controls yourself–it’s a pretty good way to guarantee a crash. Heck, you just helped make sure it happens faster.

A couple of charts showing Growth Fund of America’s performance: Interestingly enough, Growth Fund of America has outperformed the market over the last decade: How do we know which performance we’ll get over the next decade? Much of it depends on you, and a few hundred thousand total strangers. It’s not the manager’s fault when you make them sell in a down market — that’s squarely on you.

Going it alone leads to the same result: losing

Famed investor Peter Lynch has long held that we can beat the market.The real irony is that many of the investors in Lynch’s own Fidelity Magellan fund (which averaged almost 29% annual growth during his time in control) actually underperformed against the market because of jumping in and out at the wrong times, even as the fund soundly outperformed the market.

The problem remains: most of us won’t bother to do what it takes. Lynch famously said we’ll spend more time picking out a microwave than we will picking out a good investment, and he’s right. And it’s mostly because we have no clue what we’re doing, despite out best efforts to make decisions like we do.

Case in point: you’re looking to invest $1,000, and you’re using a common valuation metric–Price to Earnings, or PE. You have three companies you are comparing, with the following PE ratios:

For those uninitiated, typically the lower the PE, the better “value” a stock is considered. Instead of telling you the names of the companies above, here’s how they have performed since the IPO of Amazon.com, Inc. (NASDAQ:AMZN): 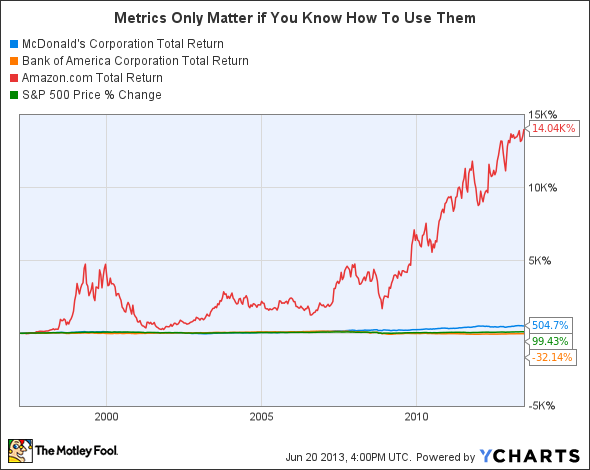 Yes, this is cherry-picking, but I want to make a couple of key points:

To channel my inner David Gardner, sometimes past results are the best indicator of future results for companies. Simply put, winners keep winning in many cases. It’s our fear that we’ve “missed the boat” that leads us to overlook the best performers.

Here’s the five-year revenue growth for the three above: 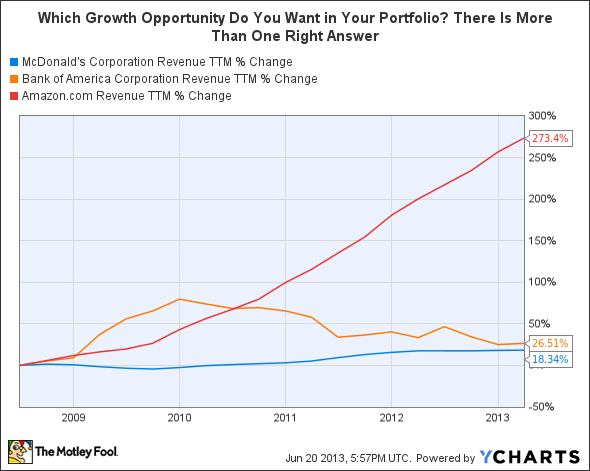 So what’s an investor to do?

Don’t get too caught up in trying to beat the market. The best investors have incredibly simple processes, which usually start and end with looking for great businesses that have big advantages, like Amazon.com, Inc. (NASDAQ:AMZN)’s fast-growing distribution footprint and incredibly broad range of product offerings, or McDonald’s Corporation (NYSE:MCD)’s recognized brand power, international expansion opportunity, and powerful pricing control because of its scale. Bank of America Corp (NYSE:BAC)’s management is steadily improving performance through both cost-cutting and customer satisfaction measures.

Is now a good time to buy these companies? I think the answer is, “it depends.” McDonald’s Corporation (NYSE:MCD) PE looks a little on the expensive side compared to its average over the past decade, but not by much. Bank of America Corp (NYSE:BAC)’s Price/Book is rising but it is still significantly lower than its historical average, though it may never return to those levels. Lastly, Amazon.com, Inc. (NASDAQ:AMZN) is very tough to price, even using Price/Sales. See how valuation is so challenging?

My recommendation? Dollar cost average into all of them over time: buy a few shares every month, or several times per year, at different price points. If you’ve learned anything today, it should be how terrible you are at timing the market. Take that out of the equation and just buy shares regularly, keeping your eye on the performance of the company’s business operations. These are solid companies with good management, and if you keep your eye on how they execute their business goals, versus fears of a “rice bubble in Bangladesh,” you’ll do well over time.

Growth Fund of America? Well, no matter how well management performs, it’s up to you when they sell. And you’ve got a pretty terrible score on that mark, Main Street.

The article Admit it: You’re Losing To the Market, and It’s Your Own Fault originally appeared on Fool.com.

Why Bank of America Corp (BAC) Stock Is Tanking Again

It is All About Exclusive Content for Netflix, Inc. (NFLX)