Why Bank of America Corp (BAC) Stock Is Tanking Again

The carnage continues. As of yesterday’s close, shares of the nation’s second largest bank by assets have fallen by almost 11% since the beginning of June. And today, they’re headed down even further. Roughly halfway through the trading session, Bank of America Corp (NYSE:BAC) stock is off by an additional 2.9%.

There are any number of ostensible reasons that traders are betting against Bank of America Corp (NYSE:BAC) today. It’s currently in the midst of a critical legal hearing, in which an unfavorable outcome could cost it billions of dollars more in legal fees and settlement expenses. It was also reported earlier this week that it and other lenders have failed to live up to all of their obligations under last year’s massive mortgage-servicing settlement with 49 state attorney generals and the Justice Department. And a new lawsuit that’s under way in Boston alleges that Bank of America Corp (NYSE:BAC) “deliberately derailed loan modifications offered under the government’s Home Affordable Modification Program.”

Yet, none of these is likely the actual impetus for the fall in its shares today. I say this because other banks are down as well. Citigroup Inc (NYSE:C) is off by 4.3%, JPMorgan Chase & C0 (NYSE:JPM) by 1%, and the KBW Bank Index more generally by 0.7%. Indeed, the only too-big-to-fail lender that’s trading higher is Wells Fargo & Co (NYSE:WFC), the stalwart mortgage lender that’s long been a favorite of Warren Buffett.

The actual explanation, in turn, appears to be tied to the same thing that sent stocks plummeting yesterday — that is, the Federal Reserve’s intimation that it could begin to reduce QE3 if the economy continues to improve. Since last September, the central bank has purchased $85 billion a month of long-term Treasuries and agency mortgage-backed securities. This has caused long-term interest rates, including mortgage rates, to drop to historic lows. If it dials back this support, it follows that these rates will rise again. In fact, as you can see in the chart below, the mere fear that it will do so has already caused mortgage rates to spike. 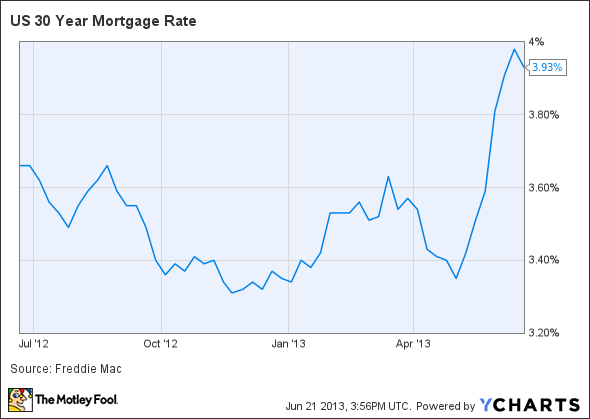 If you follow this through to its logical conclusion, then it at least appears as if there’s reason to be concerned about the profitability of banks. Higher mortgage rates imply lower mortgage origination volume. And lower mortgage origination volume leads to lower non-interest income for banks. Take Wells Fargo & Co as an example. In the first quarter of this year, it originated $109 billion in mortgages, accounting for roughly a third of the home-lending market. This equated to $2.8 billion in noninterest income, or more than half of its bottom line — I know this doesn’t translate dollar for dollar, but the point remains that mortgage income is very significant.