A SWOT analysis is a look at a company’s strengths, weaknesses, opportunities, and threats, and is a tremendous way to gain a detailed and thorough perspective on a company and its future.  As 2013 begins, I would like to pinpoint on a leading provider of entertainment, information, and communications products and services, Comcast Corporation (NASDAQ:CMCSA). 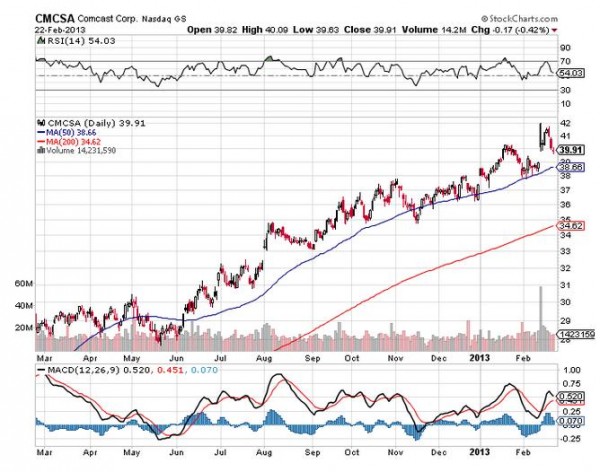 Warren Buffett once said, “Never invest in a business you can’t understand.” This not only allows the investor to purchase a company with conviction, however also allows them to spot trends blind to unfamiliar eyes. With this in mind, investors in any company should fully understand the business model of the company. Comcast is a provider of entertainment, information, and communications products and services. The company’s five main segments are; cable communications (video, high-speed internet, and voice services), cable networks (national, regional, and international networks), broadcast television (NBC and Telemundo), filmed entertainment (Universal Pictures), and theme parks (Universal parks). Due to pricing power and a healthy business model, Comcast carries a net profit margin slightly under 10%, sitting at 9.53%.

1). Accelerated Revenue Growth: In 2007, Comcast reported revenue of $30.89 billion; in 2012, the company announced revenue of $62.57 billion, representing year over year annual growth of 15.16%, a trend which is highly anticipated to sustain into the future with projections placing 2017 revenue at $80.46 billion (this explosive growth has primarily been a result of an explosion in the company’s NBC and Comcast content segment from 2010 to 2011).

2). Profit Margin Expansion: The company’s profit margin has grown from 8.40% in 2007 to 9.90% currently on a trailing 12 month basis, and this trend of profit margin expansion is extremely advantageous to the company.

3). Strong Free Cash Flow Position: In 2013, Comcast is projected to generate $9.6 billion of free cash flow from its business, a statistic which is anticipated to grow to $12 billion in 2019, and this strong free cash flow position will allow the company to reinvest in its own business and reward shareholders.

4). Dividend: Currently, Comcast pays out quarterly dividends of $0.19, which annualized puts the dividend as yielding 1.89%.

5). Institutional Vote of Confidence: 63.51% of shares outstanding are held by institutional investors, displaying the confidence some of largest investors in the world have in the company and its future.

6). Reasonable Valuation: Comcast presently withholds a price to earnings ratio of 18.80, a price to sales ratio of 1.94, and a price to book ratio of 2.36; all of which indicate a company trading with a fairly reasonable valuation, however this valuation is slightly above industry averages.

7). Established Network: As of the end of 2011, Comcast had 49.8 million total customers, and the infrastructure capable of providing video, high-speed internet, and voice services to residential and business customers, and with this established nature comes a greater level of security for investors.

1). Net Debt: Despite possessing $19 billion of cash and cash equivalents on their balance sheets, the company’s debt load of $57.4 billion results in a net debt for the company, equating to $38.4 billion, or around $14 per share.

1). Acquisitions: On February 13, Comcast announced that it will pay $16.7 billion to purchase General Electric’s 49% stake in their NBC Universal joint venture, and further acquisitions could provide substantial opportunities for the company.

2). Dividend Growth: Since implementing their dividend program in 2008, Comcast has consistently raised their dividend payouts, and further dividend growth could provide opportunity to shareholders.

Why Time Warner Inc. (TWX) Should Think About Spin-Off As Well

You Will Love These Stocks More in 2013: General Electric Company (GE), Johnson...

CBS Corporation (CBS) Has its Eye on the Future