I find it very interesting that Alexion Pharmaceuticals, Inc. (NASDAQ:ALXN) after going public in 2001, did not generate their first profit until December 2008. As we all know, this was in the throes of what is now known as the Great Recession of 2008. Moreover, Alexion’s adjusted operating earnings have grown from $0.20 per share in $2008 to $10.53 by 2019 representing an outstanding 43.72% compound annualized growth rate. Therefore, based on historical operating results since the company turned profitable, Alexion Pharmaceuticals represents a quintessential example of a true growth stock.

However, this biotech company specializing in rare diseases did experience a 4% drop in earnings in fiscal 2015 followed by an additional 7% drop in earnings for fiscal year 2016. At its peak, Alexion’s stock price exceeded $200 a share and commanded a high growth stock P/E ratio of close to 40, which up till then was justified and supported by its operating growth. However, at those high valuations the stock was vulnerable to any form of earnings weakness, and therefore, dropped to under $100 a share and a P/E ratio of less than 20 by the end of May 2017 resulting from the temporary slowdown in growth.

Since that time, the stock has modestly recovered to over $100 a share even though earnings advanced at a compound growth rate of 31.63% over the years 2017, 2018 and 2019. The moral of the story is, that since it had its minor earnings hiccups in 2015 and 2016, the company’s operating results (earnings) have grown significantly faster than its stock price. The result is an attractive biotechnology growth stock opportunity that can today be purchased at a significant discount to its earnings justified valuations based on its future growth expectations.

Alexion was able to generate a profit in 2008 thanks to its blockbuster drug Soliris, which was originally approved in 2007 but has also expanded its use for several additional rare disease applications since. Alexion offers patients with specific rare diseases the only treatments that are available which gives them great market share and pricing power. More importantly, Alexion also has two additional drugs to treat all career diseases and as I will illustrate later, a promising pipeline. Consequently, analysts expect Alexion to continue its leadership position in rare disease markets.

However, despite the long-term opportunity the company offers, it was plagued with negative headwinds that prevented the stock from rising to its true earnings justified valuations. One big negative, was a dispute between their much larger rival biotech giant Amgen over their blockbuster drug Soliris’ patents. According to Morningstar, the companies entered into a royalty-free license agreement that will provide Alexion ample time and opportunity to continue converting their rare disease patents from Soliris to next-generation Ultomiris.

Although the licensing agreement with Amgen would allow them to enter the market with their own biosimilars in 2025, Alexion’s future lies in their developing a subcutaneous dose of their next-generation medicine Ultomiris. Alexion is also evaluating Ultomiris to treat COVID-19, which if successful could provide a significant boost to the company’s revenue generation. Regardless, Alexion also has a very robust pipeline of drugs in phase 3 as depicted on the following screenshot: 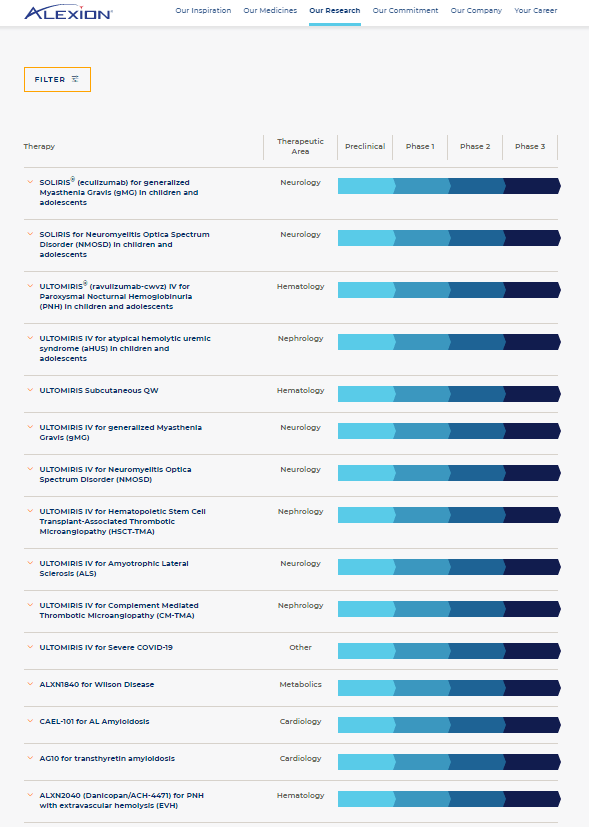 In addition to the above drugs already in phase 3 which are the most likely to reach successful approval, the company also has 5 additional drugs completing phase 2 and 4 more in preclinical.

Another headwind that Alexion Pharmaceuticals recently had to deal with were charges filed by the SEC under the Foreign Corruption Practices Act (FCPA). The SEC’s charges allege that Alexion subsidiaries made payments to foreign government officials to receive preferential treatment for Alexion’s blockbuster drug Soliris. The company neither admitted nor denied the findings, but agreed to pay $21 million to resolve the charges.

“BASED IN NEW HAVEN, CT, ALEXION PHARMACEUTICALS IS A BIOPHARMACEUTICAL COMPANY FOCUSED ON THE DEVELOPMENT AND COMMERCIALIZATION OF LIFE-TRANSFORMING DRUGS, FOR THE TREATMENT OF PATIENTS WITH ULTRA-RARE DISORDERS.

THE COMPANY’S COMPLEMENT FRANCHISE CONSISTS OF KEY GROWTH DRIVER, SOLIRIS, WHICH IS APPROVED FOR THE TREATMENT OF TWO SEVERE AND ULTRA-RARE DISORDERS RESULTING FROM CHRONIC UNCONTROLLED ACTIVATION OF THE COMPLEMENT COMPONENT OF THE IMMUNE SYSTEM — PAROXYSMAL NOCTURNAL HEMOGLOBINURIA (PNH) AND ATYPICAL HEMOLYTIC UREMIC SYNDROME (AHUS). SOLIRIS IS ALSO APPROVED FOR THE TREATMENT OF GENERALIZED MYASTHENIA GRAVIS (GMG) IN ADULTS WHO ARE ANTI-ACETYLCHOLINE RECEPTOR (ACHR) ANTIBODY-POSITIVE. THE FDA ALSO APPROVED ITS LONG-ACTING C5 COMPLEMENT INHIBITOR, ULTOMIRIS, FOR THE TREATMENT OF ADULT PATIENTS WITH PNH, TO BE ADMINISTERED EVERY EIGHT WEEKS. IN OCTOBER 2019, THE FDA APPROVED THE USE OF ULTOMIRIS AS A TREATMENT FOR ADULT AND PEDIATRIC (ONE MONTH OF AGE OR OLDER) PATIENTS WITH AHUS TO INHIBIT COMPLEMENT-MEDIATED TMA.

ALEXION ACQUIRED SWEDEN-BASED BIOPHARMACEUTICAL COMPANY, WILSON THERAPEUTICS AB, AND CLINICAL-STAGE BIOTECHNOLOGY COMPANY, SYNTIMMUNE, IN 2018. THE COMPANY RECENTLY ACQUIRED ACHILLION PHARMACEUTICALS. THE ACQUISITION ADDS TWO ORAL FACTOR D INHIBITORS, DANICOPAN (ACCH-4771) AND ACH-5228, TO ALEXION’S CLINICAL-STAGE PIPELINE FOR THE TREATMENT OF RARE DISEASES ASSOCIATED WITH THE COMPLEMENT ALTERNATIVE PATHWAY. PHASE III DEVELOPMENT IS BEING INITIATED FOR DANICOPAN AS AN ADD-ON THERAPY FOR PNH PATIENTS WITH EXTRAVASCULAR HEMOLYSIS (EVH). DANICOPAN IS ALSO IN PHASE II DEVELOPMENT FOR C3 GLOMERULOPATHY (C3G) AND ACH-5228 IS IN PHASE II DEVELOPMENT FOR PNH. ALEXION ALSO HAS A ROBUST PIPELINE OF SEVERAL CANDIDATES UNDER DEVELOPMENT ACROSS A RANGE OF THERAPEUTIC MODALITIES.

Clearly, Soliris’ sales represent the bulk of Alexion’s current revenues, which is why the agreement with Amgen was so important. And furthermore, why the successful approvals and launches from their robust pipeline are also so necessary and critical to their future.

Alexion Undervalued Based on Fundamentals

The following earnings and price correlated FAST Graph on Alexion Pharmaceuticals clearly illustrate how powerful investing in growth stocks can be. From December 31, 2008 to November 28, 2014 Alexion shareholders saw their money grow ten-fold as they achieved an astounding 49.5% annualized compound rate of return. To be clear, a single onetime $10,000 investment grew to $107,709.54, and this is without receiving a single dime of dividend income. Growth stocks are great investments when growth is good. 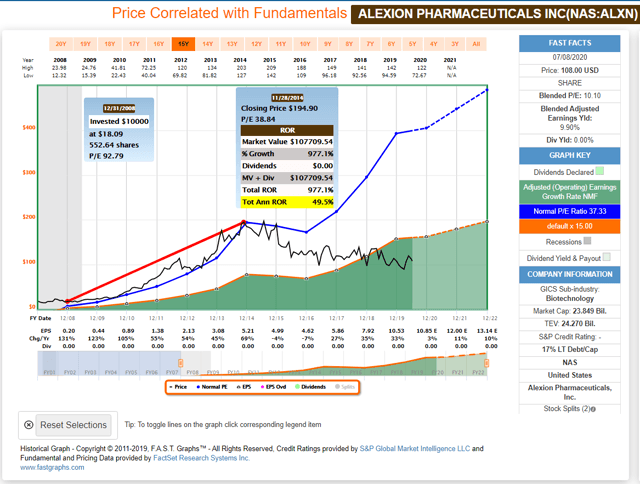 However, growth stocks can be (usually are) very risky investments because there is no margin for error. If there is even a slight interruption in the growth, even a temporary one as we saw with Alexion in 2015 and 2016, the results can be catastrophic. The following screenshot shows how vulnerable Alexion’s highflying share prices were to the modest drops in operating earnings the company experienced in 2015 and 2016 (Note the drop on the orange line). From prices and earnings peaking by year-end 2014 to July 8, 2020, Alexion shareholders saw their stock values drop 44.6% representing a (-10%) annualized compound rate of loss. 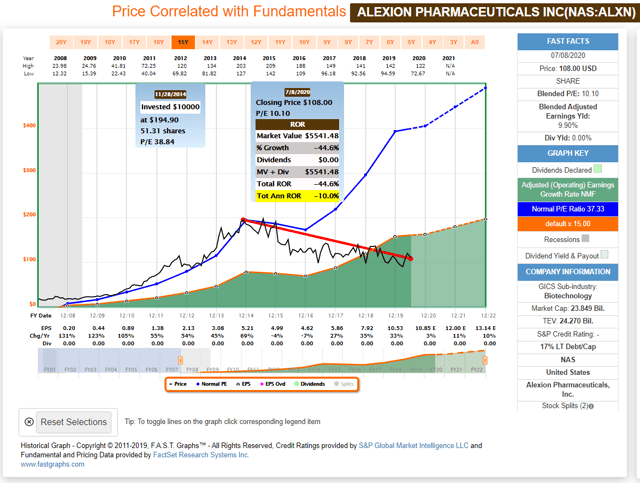 But like there is with every cloud, there is a silver lining in what has happened to Alexion’s share price since 2014. Alexion’s valuation has gone to extremely high to extremely low. Therefore, it has gone from high risk poor returns to low risk high potential returns. If Alexion does achieve the earnings growth that analysts expect, and the company trades at a market neutral P/E ratio of 15, investors stand to generate 27% plus annualized rates of return out to 2022. High risk has now become low risk high opportunity. 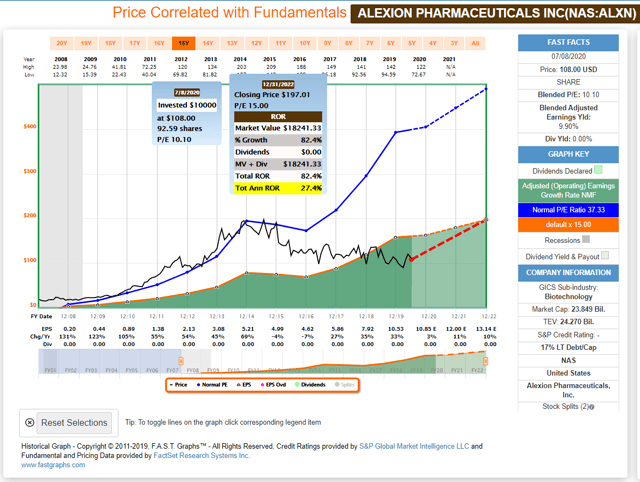 Since fiscal year 2007 Alexion has grown revenues per share at a compound annual growth rate (CAGR) of 37.2%. However, much of that growth is attributed to their blockbuster drug Soliris. Therefore, the success of their deep pipeline has become incredibly important to their future. This is a classic risk that investors must always assume when investing in pharmaceuticals or biotechnology companies. Patents and pipelines will determine the future of those enterprises.

As I will provide more detail later, Alexion has added several acquisitions in recent years. As a result, they have also added substantially more debt. However, even so, the company’s long-term debt to capital ratio remains at a very low 17%.

Alexei has also seen their invested capital per share balloon in recent years as part of their acquisition policy.

Alexion’s assets per share have grown and 34% per annum since 2007. Therefore, the company’s increase in debt and invested capital has also correlated with a significant increase in assets.

In spite of all the debt and capital investments listed above, Alexion still maintains extremely strong current ratios and quick ratios suggesting that they can meet all of their obligations and then some.

Alexion’s acquisition strategy has also allowed them to increase their book value by 42.8% per annum since 2007.

Alexion Pharmaceuticals: Selling Shares When Their Prices Were High

I do not think it should go unnoticed that Alexion took advantage of their excessive valuations from 2008 through 2015 by issuing stock. My own personal view is I like to see companies selling their stock when it’s high and only buying it back when it’s low. Consequently, I give Alexion’s high marks for tapping the capital markets and raising capital to fund acquisitions when their stock price was extremely high.

ALEXION ACQUIRED SWEDEN-BASED BIOPHARMACEUTICAL COMPANY, WILSON THERAPEUTICS AB, AND CLINICAL-STAGE BIOTECHNOLOGY COMPANY, SYNTIMMUNE, IN 2018. THE COMPANY RECENTLY ACQUIRED ACHILLION PHARMACEUTICALS. THE ACQUISITION ADDS TWO ORAL FACTOR D INHIBITORS, DANICOPAN (ACCH-4771) AND ACH-5228, TO ALEXION’S CLINICAL-STAGE PIPELINE FOR THE TREATMENT OF RARE DISEASES ASSOCIATED WITH THE COMPLEMENT ALTERNATIVE PATHWAY. PHASE III DEVELOPMENT IS BEING INITIATED FOR DANICOPAN AS AN ADD-ON THERAPY FOR PNH PATIENTS WITH EXTRAVASCULAR HEMOLYSIS (EVH). DANICOPAN IS ALSO IN PHASE II DEVELOPMENT FOR C3 GLOMERULOPATHY (C3G) AND ACH-5228 IS IN PHASE II DEVELOPMENT FOR PNH. ALEXION ALSO HAS A ROBUST PIPELINE OF SEVERAL CANDIDATES UNDER DEVELOPMENT ACROSS A RANGE OF THERAPEUTIC MODALITIES.”

In my opinion and experience, it has become increasingly more difficult to find companies that are capable of growing their businesses at above-average rates that are simultaneously attractively valued. Alexion Pharmaceuticals currently represents one of those rare opportunities. This company is purely a growth stock which pays no dividends. However, it also qualifies as a GARP opportunity, which is an acronym for growth at a reasonable price.

Although as I previously indicated, there is always risk associated with investing in growth stocks, investors will also be compensated for taking those risks if the company achieves their growth objectives. I believe Alexion Pharmaceuticals is a high growth biopharmaceutical capable of delivering above-average future growth based on a robust pipeline of pending new drugs.

Sign up for your 14-day free trial to FAST Graphs: Secure Your Future

Disclaimer: The opinions in this document are for informational and educational purposes only and should not be construed as a recommendation to buy or sell the stocks mentioned or to solicit transactions or clients. Past performance of the companies discussed may not continue and the companies may not achieve the earnings growth as predicted. The information in this document is believed to be accurate, but under no circumstances should a person act upon the information contained within. We do not recommend that anyone act upon any investment information without first consulting an investment advisor as to the suitability of such investments for his specific situation.