Alaska Air Group, Inc. (NYSE:ALK) has been a bright spot in the U.S. airline industry for the past several years. The company has used its strong franchise in the Pacific Northwest to grow revenue and profit for several consecutive years, as noted in a recent shareholder presentation. Alaska also has one of the best capital structures among U.S. airlines; only Allegiant Travel Company (NASDAQ:ALGT), which has a “capital-light” strategy, has a clear advantage over Alaska on that score. What’s more, Alaska ranks in the top three for return on invested capital, and pre-tax margin. Again, only Allegiant is better on both counts.

Yet, despite Alaska’s strong fundamentals, the company trades at a much lower valuation than Allegiant: 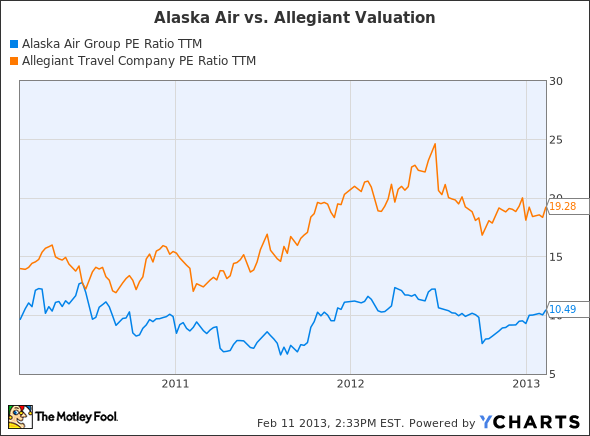 Even though Alaska shares trade near all-time highs, the company is still valued at only eight times forward (2014) earnings. Given Alaska’s modest debt levels and strong pre-tax margin, the company is a relatively safe investment when compared to other airline stocks. Furthermore, Alaska has continued growth opportunities, and is returning cash to shareholders. Lastly, Alaska’s strong position in Seattle could make it an attractive takeover target, particularly for Delta Air Lines, Inc. (NYSE:DAL).

Alaska’s growth strategy
During the past decade, Alaska has transformed itself from a glorified regional carrier serving the Pacific Northwest into a key player in numerous West Coast markets . As recently as 2007, more than half of Alaska’s capacity was deployed on routes between West Coast cities. The company has since diversified its network by adding a variety of transcontinental routes (estimated at 22% of 2013 capacity, up from 14% in 2007), as well as numerous flights to Hawaii (20% of capacity today, compared to ~1% in 2007 ).

Alaska’s acquisition of new longer-range The Boeing Company (NYSE:BA) 737-800 and 737-900ER aircraft has enabled the company to expand in the transcontinental and Hawaii markets . These planes have longer ranges than previous versions of the Boeing 737, allowing them to fly nonstop from Seattle (or other West Coast destinations) to the East Coast. Moreover, they are eligible for ETOPS certification, a process that allows them to be flown on overwater routes (e.g. to Hawaii).

This expansion of Alaska’s route network has allowed the company to grow revenue by approximately 35% since 2009 . Going forward, Alaska will continue to add Boeing 737s; the carrier has approximately 75 aircraft on order, including 37 orders for Boeing’s re-engined and more fuel-efficient 737 MAX . This will provide a platform for further growth, while reducing costs.

The recipe for a high pre-tax margin
How has Alaska managed to consistently produce a pre-tax margin near the top of the airline industry? Competitors such as Allegiant and Spirit have achieved high profit margins by paying workers less than the industry average, charging fees for just about everything (including carry-on baggage), and utilizing high-density aircraft configurations at the expense of passenger comfort. Alaska, by contrast, is a legacy carrier with relatively high labor costs and expensive aircraft.

The “secret sauce” for Alaska’s profitability is its mix of business and leisure travel. Much of Alaska’s recent expansion has been focused on warm-weather leisure markets such as Hawaii and Mexico . Those destinations do not have the same seasonality as mainland and Alaska routes; they perform relatively well in the fall and winter. Alaska can therefore reduce frequencies on mainland and Alaska routes during off-peak periods without leaving capacity idle; instead, the carrier offers additional seasonal service to Mexico and Hawaii.