Akamai Technologies, Inc. (AKAM): Would You Invest in a Company that Delivers 20% of All Web Traffic?

Content delivery networks (CDN) are groups of servers distributed in various data centers with only one goal: to serve content to end-users with high performance and availability. Almost every high-traffic website or mobile site needs to rely on at least one CDN to improve its loading speed. After all, users are not willing to wait for heavy sites to load. In 2009, Forrester Consulting showed in a survey of online shoppers that as many of 40% of them would wait no more than 3 seconds for a page to load before abandoning the site.

The main difference between 2009 and 2013 is that now websites are much heavier. Furthermore, not only are sites getting heavier but also the number of dependencies between sites is growing. Some of the most popular websites on the Internet have assets located on at least 10 different servers; images and advertisements, for example, are usually located on different servers. Because dependencies increase peering point congestion and give room to inefficient routing protocols, this makes intra-network data communication an extremely important issue in upcoming years. The good thing is that CDNs like Akamai Technologies, Inc. (NASDAQ:AKAM) can help webmasters and businesses to solve all these problems for a price.

Akamai Technologies isn’t just another CDN startup, however. Considering the strong demand for heavy content, it’s not surprising to know that dozens of startups have competed in the CDN segment for the last 10 years.None of them was able to beat Akamai in terms of profitability, however; Akamai is simply too big! It benefits from cost efficiency related to scalability.

Since demand for heavy content will only rise in the future and Akamai Technologies, Inc. (NASDAQ:AKAM) holds a leading position in the industry, it also didn’t surprise me to learn that the company’s stock has given an amazing 38% return in the past 12 months. But keep reading, because the best is yet to come! 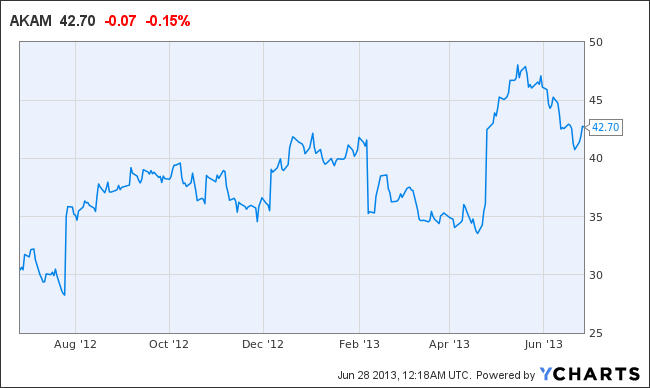 The long case for Akamai Technologies

As I mentioned, the demand for heavy content is increasing along with troubles related to interaction between several networks. Because Akamai’s CDN solves these two problems, the company’s stock is poised for growth.

Furthermore, Akamai Technologies, Inc. (NASDAQ:AKAM) already delivers about 20% of all web traffic with its Intelligent platform, comprising more than 95,000 servers located across nearly 1,000 data centers in 70 countries worldwide. Akamai’s platform is too big to be reached by a startup. Having more than 95,000 servers in its network also helps Akamai to deliver the best performance. An interesting paper by Huang et al. (“Measuring and Evaluating Large-Scale CDNs”) compares the performance of Akamai and one of its competitors, Limelight Networks, Inc. (NASDAQ:LLNW)‘s Limelight platform, which has a much smaller CDN.

The paper founds that there is a big gap in delay performance between Akamai Technologies, Inc. (NASDAQ:AKAM) and Limelight. In North America, the delay to Limelight servers was 18% higher than Akamai servers. In Europe, Limelight’s delay is over 33% higher than Akamai and in Asia about 127% worse. This clearly shows Akamai’s advantage in performance. Not surprisingly, Limelight’s stock has also performed worse than Akamai Technologies, Inc. (NASDAQ:AKAM). For the past five years, Limelight Networks, Inc. (NASDAQ:LLNW) has had an overall negative return of -31.94%, while Akamai had a positive return of 21.08%. It seems that the market is well aware of which company is the best in terms of performance.

Due to its performance, Akamai Technologies, Inc. (NASDAQ:AKAM) has managed to sell its product to about one third of Fortune’s Global 500 companies and delivers content ranging from HTML5 games to marketing videos. As demand for cloud computing services and music and video streaming continue growing, I expect companies to rely more on Akamai to deliver their content.

Don’t forget that Akamai already shows a weird pattern amongst IT companies as well: 10 years of growth! Revenue for the first quarter of 2013 was $368 million, a 15% increase over 2012’s first quarter revenue of $319 million. Net income is also improving, a 5% increase over the prior quarter ($71 million, up from $68 million.)

Nobody Really Knows If Netflix, Inc. (NFLX) Originals Are a Success