Investing in small cap stocks has historically been a way to outperform the market, as small cap companies typically grow faster on average than the blue chips. That outperformance comes with a price, however, as there are occasional periods of higher volatility. The one and a half month time period since the end of the third quarter is one of those periods, as the Russell 2000 ETF (IWM) has underperformed the larger S&P 500 ETF (SPY) by about 4 percentage points. Given that the funds we track tend to have a disproportionate amount of their portfolios in smaller cap stocks, they have seen some volatility in their portfolios too. Actually their moves are potentially one of the factors that contributed to this volatility. In this article, we use our extensive database of hedge fund holdings to find out what the smart money thinks of Agree Realty Corporation (NYSE:ADC).

Is Agree Realty Corporation (NYSE:ADC) undervalued? The smart money is taking a bullish view. The number of bullish hedge fund bets inched up by 2 recently. Our calculations also showed that adc isn’t among the 30 most popular stocks among hedge funds. ADC was in 14 hedge funds’ portfolios at the end of the third quarter of 2018. There were 12 hedge funds in our database with ADC holdings at the end of the previous quarter.

What have hedge funds been doing with Agree Realty Corporation (NYSE:ADC)?

Heading into the fourth quarter of 2018, a total of 14 of the hedge funds tracked by Insider Monkey held long positions in this stock, a change of 17% from one quarter earlier. The graph below displays the number of hedge funds with bullish position in ADC over the last 13 quarters. So, let’s see which hedge funds were among the top holders of the stock and which hedge funds were making big moves. 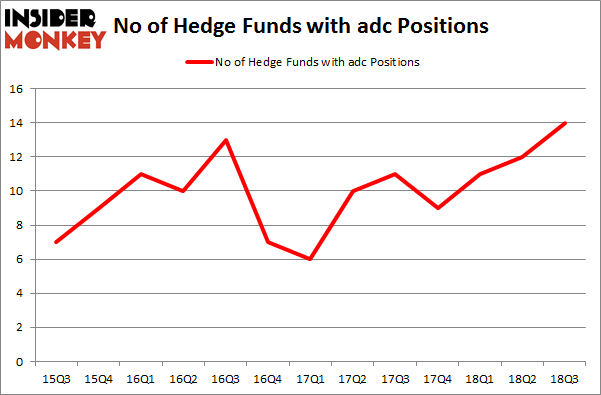 When looking at the institutional investors followed by Insider Monkey, Ken Griffin’s Citadel Investment Group has the biggest position in Agree Realty Corporation (NYSE:ADC), worth close to $25.7 million, amounting to less than 0.1%% of its total 13F portfolio. The second largest stake is held by Israel Englander of Millennium Management, with a $13.2 million position; the fund has less than 0.1%% of its 13F portfolio invested in the stock. Some other professional money managers with similar optimism comprise Dmitry Balyasny’s Balyasny Asset Management, Richard Driehaus’s Driehaus Capital and John Overdeck and David Siegel’s Two Sigma Advisors.

Now, specific money managers were leading the bulls’ herd. Balyasny Asset Management, managed by Dmitry Balyasny, initiated the most valuable position in Agree Realty Corporation (NYSE:ADC). Balyasny Asset Management had $10.2 million invested in the company at the end of the quarter. Peter Rathjens, Bruce Clarke and John Campbell’s Arrowstreet Capital also made a $0.8 million investment in the stock during the quarter. The following funds were also among the new ADC investors: Paul Marshall and Ian Wace’s Marshall Wace LLP and Gavin Saitowitz and Cisco J. del Valle’s Springbok Capital.

As you can see these stocks had an average of 16 hedge funds with bullish positions and the average amount invested in these stocks was $264 million. That figure was $71 million in ADC’s case. Hortonworks Inc (NASDAQ:HDP) is the most popular stock in this table. On the other hand Berkshire Hills Bancorp, Inc. (NYSE:BHLB) is the least popular one with only 8 bullish hedge fund positions. Agree Realty Corporation (NYSE:ADC) is not the least popular stock in this group but hedge fund interest is still below average. This is a slightly negative signal and we’d rather spend our time researching stocks that hedge funds are piling on. In this regard HDP might be a better candidate to consider a long position.