Affimed NV (AFMD): Are Hedge Funds Right About This Stock?

Affimed NV (NASDAQ:AFMD) was in 10 hedge funds’ portfolios at the end of the third quarter of 2018. AFMD has experienced an increase in hedge fund interest in recent months. There were 8 hedge funds in our database with AFMD holdings at the end of the previous quarter. Our calculations also showed that AFMD isn’t among the 30 most popular stocks among hedge funds.

At the end of the third quarter, a total of 10 of the hedge funds tracked by Insider Monkey held long positions in this stock, a change of 25% from one quarter earlier. The graph below displays the number of hedge funds with bullish position in AFMD over the last 13 quarters. With the smart money’s positions undergoing their usual ebb and flow, there exists a few notable hedge fund managers who were adding to their holdings significantly (or already accumulated large positions). 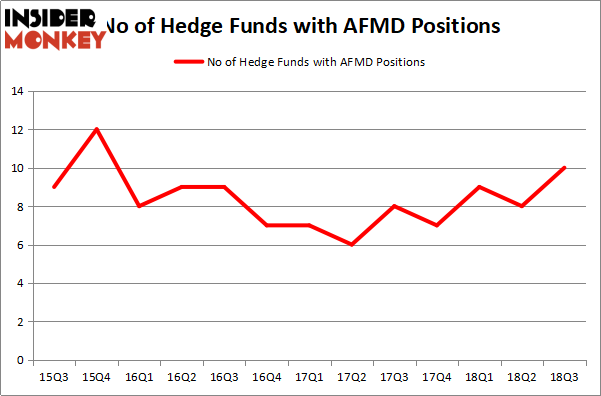 Among these funds, Brookside Capital held the most valuable stake in Affimed NV (NASDAQ:AFMD), which was worth $14 million at the end of the third quarter. On the second spot was Millennium Management which amassed $12.7 million worth of shares. Moreover, Sio Capital, Eversept Partners, and OrbiMed Advisors were also bullish on Affimed NV (NASDAQ:AFMD), allocating a large percentage of their portfolios to this stock.

As industrywide interest jumped, key hedge funds were breaking ground themselves. Sio Capital, managed by Michael Castor, assembled the biggest position in Affimed NV (NASDAQ:AFMD). Sio Capital had $2.4 million invested in the company at the end of the quarter. Phil Frohlich’s Prescott Group Capital Management also initiated a $0.7 million position during the quarter. The only other fund with a brand new AFMD position is Ken Griffin’s Citadel Investment Group.

Let’s go over hedge fund activity in other stocks – not necessarily in the same industry as Affimed NV (NASDAQ:AFMD) but similarly valued. We will take a look at American Realty Investors, Inc. (NYSE:ARL), Pioneer High Income Trust (NYSE:PHT), Barnes & Noble Education Inc (NYSE:BNED), and J. Jill, Inc. (NYSE:JILL). All of these stocks’ market caps are similar to AFMD’s market cap.

As you can see these stocks had an average of 7.25 hedge funds with bullish positions and the average amount invested in these stocks was $15 million. That figure was $34 million in AFMD’s case. Barnes & Noble Education Inc (NYSE:BNED) is the most popular stock in this table. On the other hand American Realty Investors, Inc. (NYSE:ARL) is the least popular one with only 1 bullish hedge fund positions. Affimed NV (NASDAQ:AFMD) is not the most popular stock in this group but hedge fund interest is still above average. This is a slightly positive signal but we’d rather spend our time researching stocks that hedge funds are piling on. In this regard BNED might be a better candidate to consider a long position.