Apparel retailer Aeropostale, Inc. (NYSE:ARO) might be in serious trouble. The company recently reported fourth quarter earnings that slightly topped analyst estimates, but followed it up with sour prospects for the current quarter. As expected, shares slid, and investors started to question the sustainability of Aeropostale’s business of selling clothes to teens and tweens – possibly the planet’s most fickle demographic.

Aeropostale, Inc. (NYSE:ARO) operates two primary brick and mortar brands – its namesake stores, which are geared towards 14-17 year old teenage boys and girls, and its P.S. from Aeropostale brand – which is aimed at younger children. It also owns e-commerce retailer GoJane, which sells women’s apparel, accessories and shoes.

For its fourth quarter, Aeropostale posted a loss of a cent, or $671,000, a sharp decline from the profit of 32 cents per share, or $26.1 million, it reported in the prior year quarter. Adjusting for one-time charges, the company earned 24 cents per share, beating the FactSet consensus estimate of 22 cents per share.

Although Aeropostale beat estimates for both its top and bottom lines, the company’s bleak forecast for the first quarter, which calls for a loss between 15 cents to 20 cents per share, sank shares more than 5% on March 15. Analysts had anticipated a profit of 8 cents per share.

The company blamed poor holiday sales, which declined after strong sales on Black Friday, and weak macro trends for its weak numbers.

Aeropostale’s same-store sales sank 8% – a decline from the drop of 7% it reported last year. However, revenue from its e-commerce segment, which includes its Aeropostale and GoJane websites, rose 16% year-over-year to $96.8 million – 12.1% of the company’s total sales.

This means the company sacrificed gross margin – which contracted 210 basis points to 24% – to unload cheaper products in an attempt to reduce its inventories. 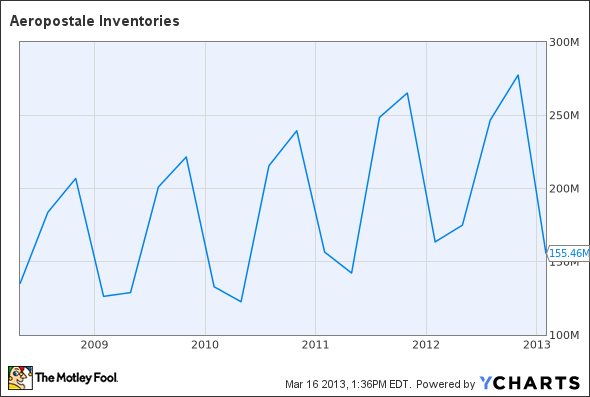 As we can see in this chart, although Aeropostale’s inventories are cyclical, they have steadily risen 15.2% over the past five years.

Several of Aeropostale’s metrics are headed in the wrong direction, as seen in the following chart. 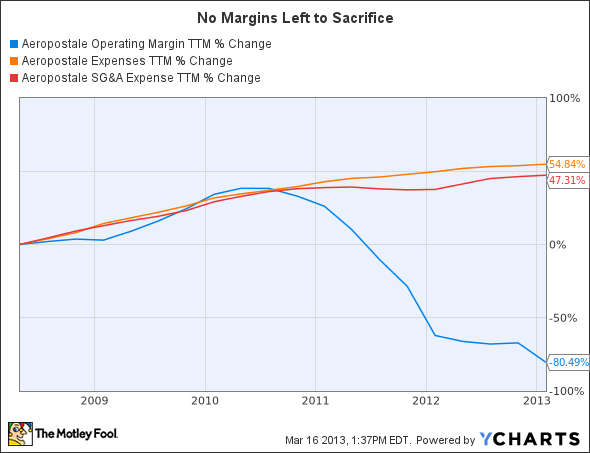 Operating margin, which is currently at 2.49%, started a steep decline in 2010, and hasn’t stopped sliding since. Meanwhile, total expenses rose 54.84%. These numbers indicate that Aeropostale can’t continue its trend of sacrificing its margins to drive sales, because soon there won’t be any margins left to sacrifice.

Unfortunately, Aeropostale, Inc. (NYSE:ARO)’s first quarter forecast confirms that the company is unable to pull out of this nosedive towards negative profit margins and quarterly losses. The company expects to report a loss between 15 cents to 20 cents per share in the current quarter, far below the profit of 9 cents per share that analysts had hoped for.

Are teens and tweens simply tired of Aeropostale?

Although I believe some of Aeropostale’s pain can be attributed to macro factors, such as the payroll tax hike and delayed tax returns, I believe that Aeropostale is simply losing ground against competitors such as Abercrombie & Fitch Co. (NYSE:ANF), The Gap Inc. (NYSE:GPS) and American Eagle Outfitters (NYSE:AEO). Other retailers such as rue 21, Forever 21, Hot Topic (NASDAQ:HOTT) and H&M are also further fragmenting the market.

Aeropostale’s ‘core basics’ business, which includes its graphics T-shirts and fleeces, is experiencing waning popularity with its target teen and tween demographic. To put it bluntly, teens and tweens may simply be getting bored of Aeropostale’s styles.

In my opinion, Aeropostale’s focus on teens and tweens is simply not diversified enough for today’s rapidly shifting retail environment. The Gap Inc. (NYSE:GPS)’s diverse portfolio of brands – which include the lower-priced Old Navy, the mid-priced Gap and the higher-end Banana Republic – helped the company maintain balance in a challenging macro environment. Meanwhile, Hot Topic has maintained and edge with its popular graphics T-shirts, which helped its stock climb 38% over the past twelve months.

When a company’s margins are contracting to the point of unprofitability and its expenses are rising, it’s not a good idea to expand. However, Aeropostale is planning to open 14 new namesake stores and add 60 new P.S. locations in fiscal 2013. The company also intends to renovate 30 stores while closing 15 to 20 non-performing namesake stores.

First, it would have made been more prudent to wait for a sharp price decline (such as now) to buy back shares at a discount. Second, that money would have been better spent elsewhere – such as on marketing, product development or promotions.