Investing ethically has always been a dilemma for many people. Yet strong top and bottom-line growth has often been fueled by the globalization and domination of countries with cheaper labor. However, there is a difference between fair trade that utilizes opportunistic outsourcing and blatant human rights abuses. One hotbed of controversy is Uzbekistan, the former Soviet state that has been harshly criticized for its cotton industry.

Cotton at a human cost

Every fall, over one million citizens, including children as young as nine and workers from the private sector, are required to work up to 12 hours daily in the country’s cotton fields, according to Human Rights Watch, a non-governmental organization. The workers are expected to work for free or very little pay, facing high fines and possible arrest if they refuse to comply. Opponents claim that this state-sponsored, communist cotton industry is a form of modern slavery. Proponents believe that Uzbekistan, a double-landlocked nation, needs this strong support of its cotton export industry to survive. Uzbekistan is currently the world’s fifth largest exporter of cotton, trailing only the United States, India, Australia and Brazil.

As a result, the use of Uzbek cotton by major Western apparel retailers, such as Aeropostale, Inc. (NYSE:ARO) and Urban Outfitters, Inc. (NASDAQ:URBN), has been harshly criticized by supporters of ethical sourcing and fair trade. However, retailers who have been accused of using Uzbek cotton claim that Uzbek cotton is hard to identify and separate from the supply chain, since it is often traded through other markets, such as China and Bangladesh. In addition, many companies’ bottom lines would crumble if they realigned their entire supply chain with more acceptable and expensive sources of cotton.

Therefore, should companies comply with the demands to boycott Uzbek cotton, or should their shareholders simply accept this partnership as an inevitable phase of globalism?

The teens and the hipsters

For investors following Aeropostale, Inc. (NYSE:ARO), the company’s insistence on using lower-cost cotton shouldn’t be surprising. The struggling teen apparel retailer reported a 14% decline in same-store sales last quarter. This contributed to a steep 9% year-on-year decline in revenue. It also reported a net loss of $0.16 per share, down from a profit of $0.13 per share in the prior year quarter. It reported a meager profit margin of 0.52%, which means that any further expenses could simply sink the company. In addition, the company has gotten into a habit of using margin crushing markdowns to generate sales volume, which it also lacks. Therefore, the company has skirted around the issue of Uzbek cotton since it simply doesn’t have the wiggle room to relocate its supply chain.

Urban Outfitters, Inc. (NASDAQ:URBN), on the other hand, has been doing much better than Aeropostale, Inc. (NYSE:ARO) financially. Even though same-store sales came in flat last quarter, the company’s earnings rose 38.6% while its revenue grew 13.9%. It also enjoys a much higher profit margin of 8.7%. The company caters to a younger, hipper crowd with its namesake brand, which produces apparel branded with humorous, ironic and retro graphics. Meanwhile, its fastest growing brand, Free People, is focused on a younger female demographic.

Therein lies the hidden threat to Urban Outfitters, Inc. (NASDAQ:URBN), which has seen its shares rise more than 50% over the past twelve months – its core audience. 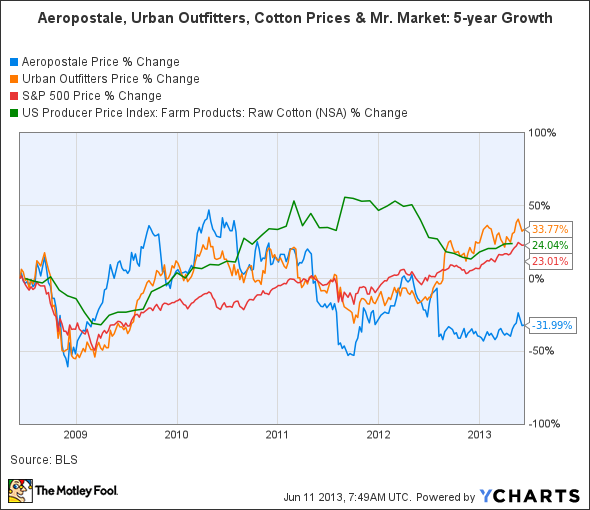 The lessons of the past

Urban Outfitters notably caters to a young, wired and very socially connected demographic, a strength the company played on with the development of its new smartphone app, which features enhanced social sharing capabilities.

Therefore, Urban Outfitters, Inc. (NASDAQ:URBN) would be wise to remember the trials and tribulations of The Gap Inc. (NYSE:GPS), which was severely tarnished by child labor allegations over much of the prior decade. Gap suffered a PR nightmare when human rights groups plastered college campuses with posters of its weary overseas factory workers clad in its retail garments.

Perhaps fearing such a potential backlash, Urban Outfitters has recently shown signs of improvement. In its company policy, Urban Outfitters, Inc. (NASDAQ:URBN) now claims that it “does not knowingly carry products” or “source any private label or own-brand products” from Uzbekistan. However, Urban Outfitters has not signed a widespread pledge to stop child and forced adult labor in the country, which has already been signed by 131 other companies, including Adidas, American Eagle Outfitters (NYSE:AEO), H&M and Zara.

Considering that cotton costs have risen nearly 50% over the past decade, I believe that choosing more ethical sources of cotton is a choice that only richer companies with stronger bottom lines are able to make.

not only signed the aforementioned pledge, but directly addressed the “ongoing problem in the harvesting of Uzbek cotton” by asking its vendors to “restrict the use of cotton in Disney-branded products until this matter is resolved.” Although that seems like a bold statement from the House of Mouse, investors should remember that cotton products do not comprise a significant portion of the company’s top line.

Nearly half of Disney’s revenue is generated by its media networks, and a third comes from its theme parks and resorts. Disney’s Consumer Products segment, which contains the most textile-based products, only accounted for 8% of its top line in 2012. Therefore, Disney has very little revenue to lose and a lot of positive PR to gain from its restrictions on cotton.