Despite the rising trend of mobile devices, there are still several companies that are heavily dependent on PC sales. Market research firm IDC has reported that PC sales fell 14% in the first quarter of 2013. This is nearly twice as much as the expected 7.7% decrease, and it marks the most significant drop since IDC started keeping track in 1994. There are a few companies that could be in serious trouble if this trend continues to head south. 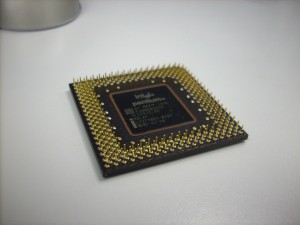 Intel Corporation (NASDAQ:INTC) and Advanced Micro Devices, Inc. (NYSE:AMD) could see dramatic declines as both companies are dependent on producing chips for traditional PCs. AMD’s revenues fell 21% from 2011-2012, while Intel’s fell just over 1%. Intel’s gross margins have remained fairly stable over the past few years and have even grown six of the past ten years. Advanced Micro Devices, Inc. (NYSE:AMD) has not been as fortunate — its gross margins declined from 44.8 to 22.8 from 2011-2012.

Intel Corporation (NASDAQ:INTC) has actually tried to get into the mobile market, but it hasn’t seen much success. It has built some partnerships with a few smartphone carriers but has only managed to build chips for low-end phones as the high-end phones continue to use ARM-based chips. Intel will soon be rolling out its Haswell chips, which should work well for Ultrabooks and Microsoft Corporation (NASDAQ:MSFT)’s Surface Pro tablets. Surface Pro sales have been less than extraordinary, but Haswell could change that.

Advanced Micro Devices, Inc. (NYSE:AMD) has reportedly been working on ARM-based processors, but they are yet to release anything substantial. Over the next few years, AMD should have steady sales after deals were made to provide chips for both Microsoft Corporation (NASDAQ:MSFT) and Sony Corporation (ADR) (NYSE:SNE).

Microsoft may not be in as bad of a position as some may believe. Windows 8 hasn’t provoked an overwhelming response from users, but the company still makes a lot of money off of its software programs people can’t live without — most notably Office. The company also has a new Xbox device that should relate well with consumers and may represent the future of smart TV’s. Aside from this, Microsoft has been bolstering Bing and its web services and revitalizing its email.

So, it appears these companies may struggle in the future, but what kind of opportunity do they present for investors now? FCF yields for Microsoft, Intel, and AMD are 11.4%, 7.2%, and -27.7% (due to a negative FCF of $471 million). AMD appears to already be struggling, but Microsoft Corporation (NASDAQ:MSFT) and Intel Corporation (NASDAQ:INTC) appear to be fairly cheap. Intel and Microsoft provide solid dividends for shareholders with 4.1% and 3.0% yields, but AMD doesn’t issue any dividends.

While Advanced Micro Devices, Inc. (NYSE:AMD) appears to be struggling in virtually every area, Intel Corporation (NASDAQ:INTC) does provide a lower P/E than Microsoft as they show ratios of 10 and 15.8 respectively. Microsoft Corporation (NASDAQ:MSFT) and Intel appear to be doing much better than AMD, however all of their stocks are down over the past year. The chart below shows a comparison to the S&P 500, and just how significantly AMD is hurting. 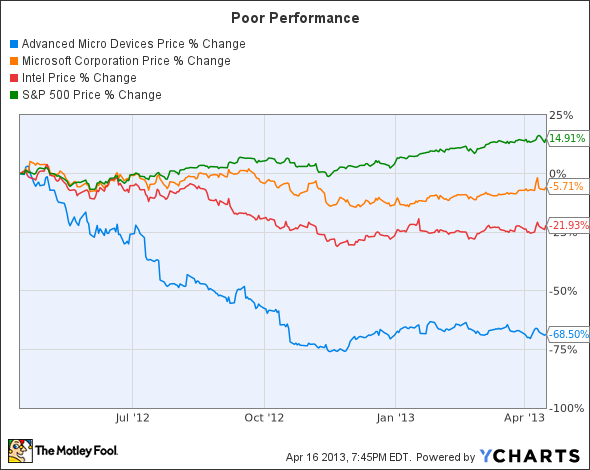 One company that may bring a glimmer of hope to companies dependent on PC sales is Hewlett-Packard Company (NYSE:HPQ) . It recently announced that it will be teaming up with Leap Motion technology. The Leap Motion controller will come, free of charge, with computer purchases from HP, and will eventually be installed in various HP gadgets. It is hoping this will bolster PC sales as Leap Motion can be bought separately for under $80.