No two companies embody the shift of traditional computing to mobile form factors like Intel Corporation (NASDAQ:INTC) and QUALCOMM, Inc. (NASDAQ:QCOM) . The two chip makers are two sides of a silicon coin, where one dominates the market for PC processors while the other is the go-to vendor for mobile chips.

Late last year, there was a symbolic changing of the guard when Qualcomm’s market cap overtook Intel’s for the first time ever. In the months since, QUALCOMM, Inc. (NASDAQ:QCOM) has slightly widened its lead, but both companies are worth right around $110 billion. 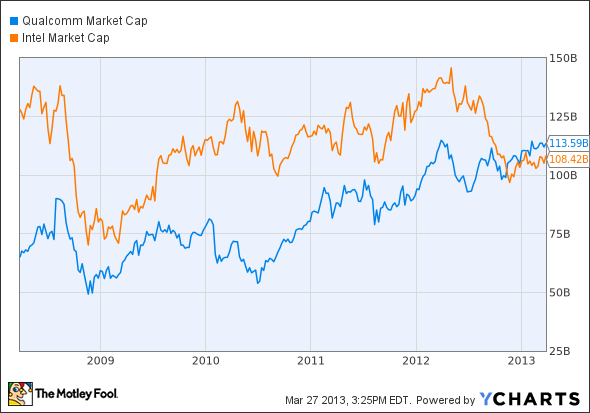 Intel Corporation (NASDAQ:INTC) continues to face headwinds, as the PC market that it relies on remains weak, while Qualcomm’s licensing and chip businesses are both sitting pretty amid global consumer adoption of mobile devices.

While Qualcomm’s technology is found inside nearly every single mobile phone in the world in some form or fashion — either through licensing its intellectual property portfolio or one of its mobile chips (applications processors and baseband modems) — most consumers may not even realize it. Even fewer care.

The market for mobile chips is more competitive than PCs, and there is also a higher level of integration among device OEMs where chips are designed in-house. QUALCOMM, Inc. (NASDAQ:QCOM) enjoys a revenue share of over 40% in the applications processor market, but that’s only part of the bigger picture, as companies like Apple (NASDAQ:AAPL) and Samsung, the two largest smartphone vendors, are increasingly moving toward in-house chips.

That’s one reason why QUALCOMM, Inc. (NASDAQ:QCOM) can’t command the same level of brand recognition as Intel. It’s not as if Hewlett-Packard (NYSE:HPQ) or Dell (NASDAQ:DELL) ever made their own PC processors.

Snapdragon Inside?
In a recent interview with MIT Technology Review, Qualcomm chief marketing officer Anand Chandrasekher addressed how he hopes to change that. The exec spent 18 years at Intel and only joined Chipzilla’s rival last year.