Activision Blizzard, Inc. (NASDAQ:ATVI)‘s rapid rally had seemed to be ending, following the post-earnings plunge. The company had rallied to a new 52-week high of $15.40 on May 8, but fell to $15.18 at the time of this writing. The driving force of the fall following the first-quarter earnings release was due to the cautious outlook issued by management.

The company performed overwhelmingly well during the previous quarter, topping analyst earnings estimates of 11 cents by 6 cents, or by more than 50%. Management highlighted various areas as a reason for the cautious commentary, including a shift in release dates for competing products and next-generation transition-related uncertainty among others. However, Activision Blizzard is now recovering from the slight decline and looks to be headed for a new 52-week high in the next few days. 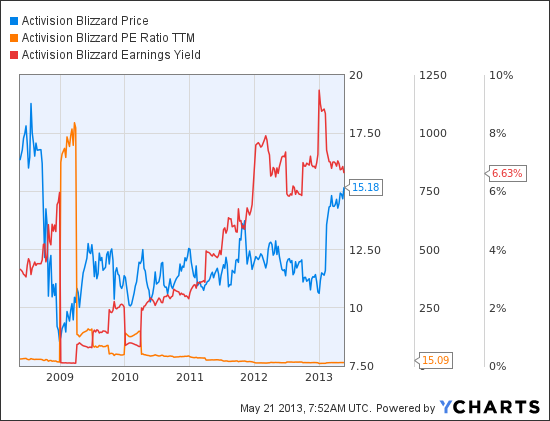 Bumps on the road, but the journey continues

Activision Blizzard, Inc. (NASDAQ:ATVI)’s rally was triggered by the impressive results reported during the December quarter. But the more recent earnings report delivered a blow to what had seemed a sustainable rise. Analysts are still very optimistic on the stock with at least 17 of them rating it as buy.

The stretch achieved between January and May seems to suggest a sprint rally, but following the recent halt, the scenery has since changed to suggest otherwise. Following the cautious guidance issued by management with regard to outlook, there is little to suggest that the stock is going to continue with the rally witnessed over the first quarter in 2013. However, I would like to think of it as some sort of deceleration, with the price now settling for a gradual rise.

Some would find it easy to conclude that the sucker rally is finally coming to an end, considering that the earnings yield, which recently capped a new four-year high, has also taken a tumble. However, the company’s fundamentals remain strong and it is placed at the top of its competitors. All numbers are counting in favor of Activision Blizzard, Inc. (NASDAQ:ATVI) in a field that includes aspiring market leaders and industry giants.

Activision sits at the top of competition

The company’s operating margin stands at 30%, one of the best in the gaming industry, while the profit margins are just slightly lower at 24%. Its gross margin stands at an amazing 66%, which is the same as that of Sony Corporation (ADR) (NYSE:SNE). However, the industry average is at a whopping 70%, which tops the two giants.

Take-Two Interactive Software, Inc. (NASDAQ:TTWO) is the only unprofitable company among the trio of competitors. The company’s loss per share stands at $0.35 for the trailing 12 months. The industry EPS is at $0.40, well below Activision Blizzard, Inc. (NASDAQ:ATVI)’s, which stands at $1.08, the highest among the four companies. The Japanese electronics giant, Sony, has an EPS of $0.51, while Electronic Arts Inc. (NASDAQ:EA)’s earnings per share stand at $0.31.

Sony Corporation (ADR) (NYSE:SNE) seems to be the likely alternative for investors when choosing among these four stocks, but considering the current board events – Third Point hedge fund manager, Daniel Loeb has already indicated that he intends to have Sony’s entertainment unit spun-off from the rest of the business – the uncertainty is bound to push some investors away.

Santa Monica, Cailf.-based Activision released a next-generation video game, an advancement to the Call of Duty series. The new Call of Duty Ghosts is well placed for use in the next-gen consoles, with renewals highly expected for Nintendo and Sony’s PlayStation.