Let’s say you’re in a casino in Vegas or Atlantic City, and you see a new card game. Here are the rules:

1). Every card carries a different value, and the value changes constantly — usually with no relation to the value you “bought” the card for.

2). The other players are located at other casinos around the world, not at the table with you, so you have no way to predict what they will do.

3). To win, you have to guess what those other players are going to do in the short term to affect the value of your cards.

While this may sound like a pretty stupid card game, it’s not that far removed from how many people actually “play” the investing game. Let’s talk about how trying to time the market is usually a losing game and how it causes us to miss out on real opportunities.

It’s rarely what we expect

While I certainly don’t intend to make light of the incident, the December 2012 tragedy at Sandy Hook Elementary presents us with a nearly textbook example of how reacting to the market can lead to painful losses. Take a look at this chart: 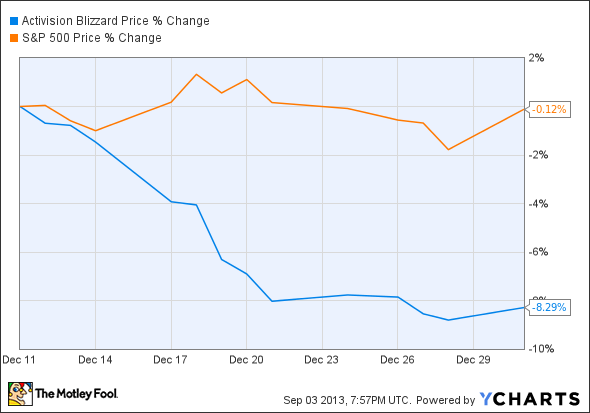 Activision Blizzard, Inc. (NASDAQ:ATVI) makes a number of violent games, including its Call of Duty franchise, which heavily features realistic combat and military-style weapons. The market’s reaction to the Sandy Hook shooting largely owed to fear of potential repercussions against video game makers, and it was mostly unfounded. Here is what Activision Blizzard, Inc. (NASDAQ:ATVI) shares have done since the end of December 2012: 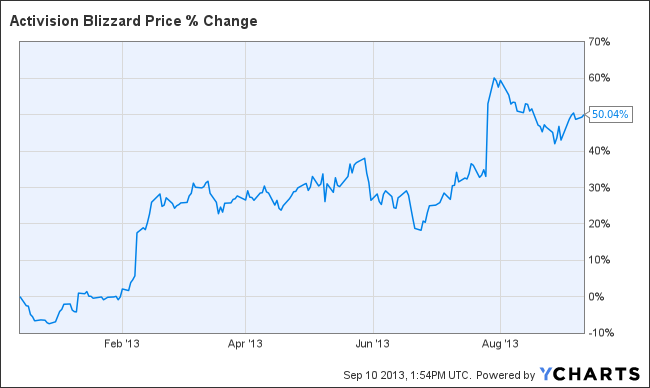 One of the biggest risks of selling when a stock is falling (especially if it’s falling for potentially unfounded reasons) with the plan to “get back in” after it bottoms out is our natural impulse to “anchor” on the price we sold at. Activision Blizzard, Inc. (NASDAQ:ATVI) shares bottomed out around $10.60. By the end of January, Activision shares had rebounded and then some; investors who were trying to get back in at a lower price were left out in the cold. And it gets even better. Here’s what Activision has done so far this year:

2). On July 25, Activision announced that it (along with an investor group) was acquiring the majority of Vivendi’s controlling stake. Shares went up almost 20% in the next three market days and are still up more than 12%.

Anchoring on that price back in December would have meant missing out on a market-crushing 50% return in less than a year. And here’s the key: The return was a product of sharp execution and a strong management team, led by CEO Bobby Kotick, focusing on strengthening the business.

Industry trends versus a market overreaction 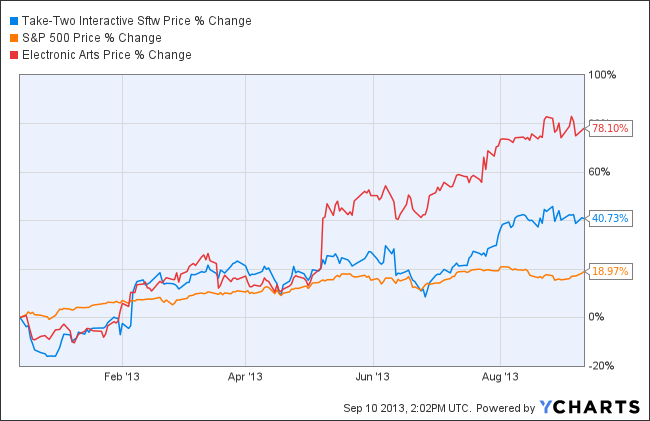 Take-Two Interactive Software, Inc. (NASDAQ:TTWO)’s stock price has risen on consistently strong results over the past year, with earnings and revenue up significantly on the strength of a number of hit games and the increased profitability of its growing digital distribution. Simply put, the business is performing well, and any concerns about a backlash against its games were both premature and unfounded. They also ignore the strength of Take-Two Interactive Software, Inc. (NASDAQ:TTWO)’s sports franchises, including NBA 2K13 and Major League Baseball 2K13.