GameStop Corp. (NYSE:GME) had a lot to prove going into its earnings announcement this week. The stock was already near a five-year high before the report, and it’s not as if the video game industry has been a great place to do business lately.

In fact, the last time that GameStop Corp. (NYSE:GME) reported quarterly growth was in early 2011 when Nintendo was dominating the sales charts with a 3DS Pokemon title. It has been a rough ride from there for GameStop: The company booked shrinking sales in each of the last eight quarters.

Make that nine straight quarters. GameStop Corp. (NYSE:GME)’s latest report stayed true to form with another dip in sales — this time by 10.7%. Naturally, the market responded by sending shares up to a new high. What gives? 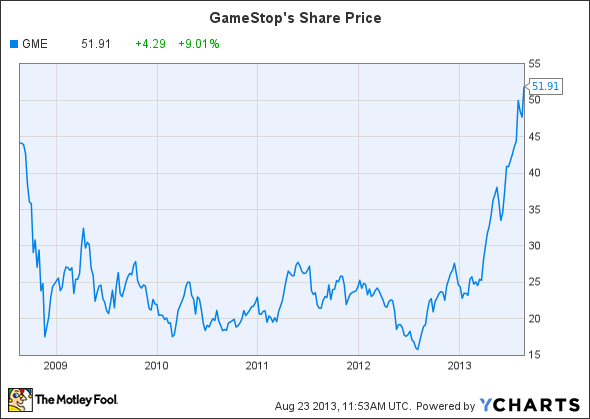 I see two good reasons for GameStop Corp. (NYSE:GME)’s epic rally. For one, the company has made excellent progress at building diversity into its business. Back in 2011, GameStop got 87% of its revenue from video game hardware and software products. But since then it has ramped up its digital strategy and built a new revenue stream around the trade-in and resale of mobile devices.

Those two new businesses are on a roll. Mobile sales expanded by 121% last quarter and digital content receipts were up 18%. Thanks to performances like that, GameStop Corp. (NYSE:GME) now gets a solid 20% of its revenue from sources other than traditional video game sales.

But the company’s best hope is in a strong rebound in the video game industry. And by that measure, it could be poised to book some fantastic growth in the quarters ahead. The big worry for GameStop has been that gamers won’t shell out hundreds of dollars for new gaming consoles this time around. With the surge of gaming on mobile devices and tablets, maybe there wouldn’t be room for another expensive entertainment device. But that worry seems misplaced. GameStop is seeing huge demand for pre-orders on its initial allotment of next-gen systems.

And things look even better on the software side. In September Take-Two Interactive Software, Inc. (NASDAQ:TTWO) launches the widely anticipated Grand Theft Auto V title that is sure to send hard-core gamers flocking to stores. But those customers could find shops already crowded with kids, as Disney’s Infinity release is going head-to-head with Activision Blizzard, Inc. (NASDAQ:ATVI) in the $1.5 billion market that it built with its Skylanders franchise. Then the real fun begins, when Activision Blizzard, Inc. (NASDAQ:ATVI)’s Call of Duty franchise reboot hits stores in November around the same time that Electronic Arts Inc. (NASDAQ:EA) launches its competing shooter, Battlefield 4.