The volatility in retailers has been nauseating of late. However, for the deep value investor with a steel stomach, there could be some solid buying opportunities. The major teen retailers have been in a free fall for the past few months, including the likes of Abercrombie & Fitch Co. (NYSE:ANF), American Eagle Outfitters (NYSE:AEO) and Aeropostale, Inc. (NYSE:ARO).

Over the past year, both American Eagle Outfitters (NYSE:AEO) and Aeropostale, Inc. (NYSE:ARO) are down over 30%, yet Abercrombie & Fitch Co. (NYSE:ANF) is relatively flat. 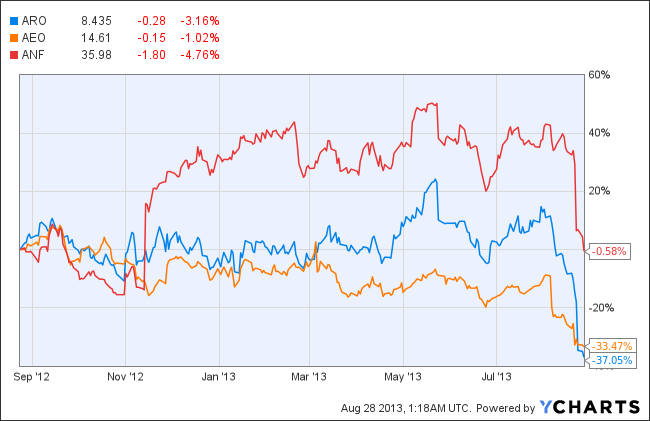 For now, you can blame the hipsters and value-seeking teenagers who are running to Forever 21 and Urban Outfitters for their clothing needs. This has caused the recent quarter to be abysmal for the three A-retailers.

Never fear
With retail data coming out every month, versus quarterly for the majority of other sectors, overreactions are not uncommon in the apparel business. And when an overreaction happens, you should ask two questions; is management competent? Will the company survive? If the answer is yes and yes, then it’s generally safe to invest.

That’s why I’m excited about the recent pullback in Aeropostale, Inc. (NYSE:ARO). No debt, strong cash position, and it’s generating free cash flow that’s twice its net income. The overreactions at Aeropostale are becoming more and more intense. In the past three years alone, there have been four large sell-offs.

However, the following surge in the stock is becoming more and more intense. During the latest pullback in 2011, the stock bottomed out around $9.60, and then the stock soared more than 100% over the next six months.

Over the past decade, Aeropostale has offered investors solid returns. Sure, it has missed a season, but this has historically proven to be a great time to buy. From 2004 and up to 2012, Aeropostale, Inc. (NYSE:ARO) enjoyed returns on invested capital between35% and 60%. Up until the the recent pullback, Aeropostle had outperformed its major peers over the last eight years. 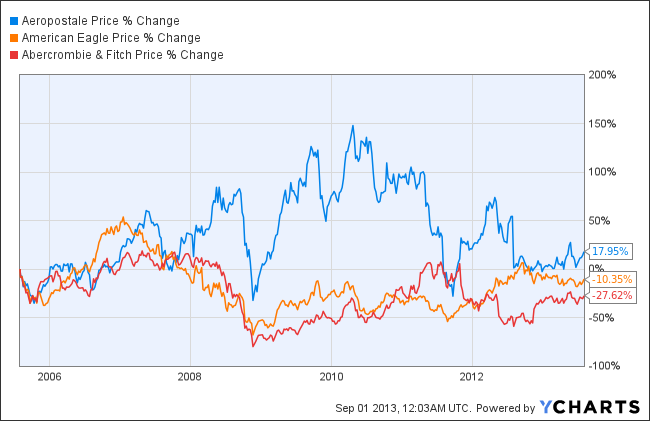 Sales at Aeropostale are still robust, generating revenue at decade highs of close to $2.4 billion over the trailing 12 months. The recent issue is related to margin pressure. Cost-cutting and more aggressive overhead management should get margins back in line for next season.