Of all the segments of the retail apparel sector, the teen and young adults sector is one of the most brutal. These retailers, which include Abercrombie & Fitch Co. (NYSE:ANF), Aeropostale, Inc. (NYSE:ARO), Forever 21 and H&M, must continuously keep their styles fresh and relevant, while finding new ways to outmaneuver their industry peers.

Yet teens continue to be an extremely lucrative market for these retailers. A recent survey from Piper Jaffray, “Taking Stock with Teens,” revealed that teens spend roughly 21% of their budgets towards new clothes. However, the survey also indicated that teenagers are spending less than the previous two seasons, which indicates that the amount of overall revenue generated by teens will decrease. This means that only the strongest teen apparel retailers will survive in this challenging, competitive environment. In addition, the back-to-school shopping season, which ranks second behind Christmas in terms of consumer spending, is fast approaching.

Recent quarterly earnings have revealed the losers of this sector – Abercrombie & Fitch Co. (NYSE:ANF) and Aeropostale, Inc. (NYSE:ARO), which respectively reported same-store sales declines of 15% and 14%. Both retailers blamed the weather and weak economic conditions for their declines, but I believe that waning demand for large logo apparel and the sluggish rotation of products were also major contributing factors.

Therefore, coming in at the top of that embarrassing list explains those steep same-store sales declines far better than generic comments regarding the weather and the economy. In other words, Abercrombie & Fitch Co. (NYSE:ANF) and Aeropostale are completely out of touch with their core teen market. Aeropostale, Inc. (NYSE:ARO)’s desperation to stay relevant has been apparent in its increased promotions, but neither its lower prices or fashions have generated higher sales.

The diversity of Gap’s portfolio, which includes Old Navy, The Gap Inc. (NYSE:GPS), Banana Republic and Athleta, has insulated it from the challenges of the teen apparel sector. Gap’s strength comes from its tiered pricing strategy, with Old Navy being the cheapest, Gap being a mid-range option, and Banana Republic being its premium brand. Therefore, the company is able to shift gears quickly by balancing between these brands in times of economic prosperity and despair. Gap has also branched out into yoga-apparel with its Athleta label, which is aimed at carving out a piece of Lululemon’s dominant market share.

Meanwhile, Urban Outfitters, Inc. (NASDAQ:URBN) has carved out a niche for itself with quirky kitsch apparel featuring classic video games and cartoon characters, which has proved popular with the younger “hipster” crowd. Urban Outfitters’ Free People brand, which is aimed at a young, hip female demographic, is also very promising. The brand posted 37% consolidated same-store sales growth (including direct-to-consumer sales) last quarter. Urban Outfitters has also invested heavily in e-commerce through apps that have social networking components, which fueled a 44% gain in direct-to-consumer sales last quarter.

Neither Gap nor Urban Outfitters completely rely on their teen apparel, which has insulated them from the main headwinds facing Abercrombie & Fitch and Aeropostale, Inc. (NYSE:ARO). 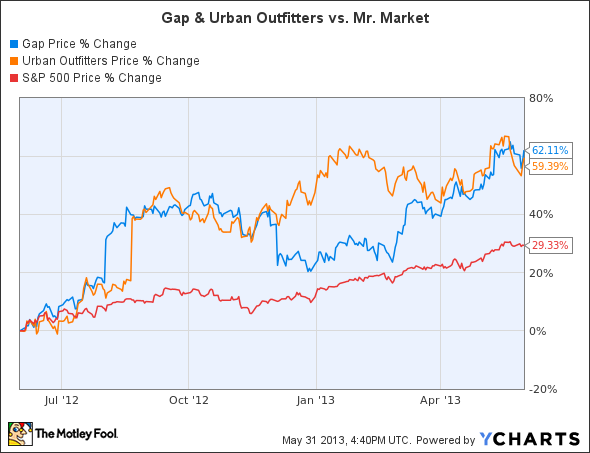 Privately-held Forever 21 is an extremely popular brand with the younger demographic, ranking third in popularity among teens according to Piper Jaffray. Forever 21 reportedly generates over $3.5 billion in annual revenue, which is nearly equal to annual sales at American Eagle Outfitters and slightly lower than Abercrombie & Fitch Co. (NYSE:ANF)’s.

While those choices are fairly obvious ones for bulls and bears to trade, there is an apparel retailer currently under the radar of many retail investors – The Wet Seal, Inc. (NASDAQ:WTSL).

The Wet Seal, Inc. (NASDAQ:WTSL), which focuses on lower-end apparel for teens and young women, keeps its prices low and comparable to H&M. This approach has made it extremely popular with teen shoppers. Even though the company plunged into unprofitability late last year, it made a promising comeback during the first quarter. The company earned $0.03 per share, or $3.1 million, a big improvement over the net loss of $273,000, or break-even on a per-share basis, it reported in the prior year quarter. Revenue declined 5% to $140.4 million.