Now that President Barack Obama has been reelected, many fear his vision of big-government planning, spending and taxing. But what is so bad about big government anyway?

The problem is, with a growing government comes growing expenses. And these days the United States is sitting on the edge of a much-talked-about “fiscal cliff” that could make a huge dent on its financial status. Simply put, the country can’t afford to keep spending like it has.

But not all is lost: This major disconnect couldmean a tremendous opportunity for savvy investors to make at least a 40% return.

You don’t have to go too far

If you look closely at state and local government budgets, then you’ll see how their problems only get worse. Though state tax revenue is picking up, mandated spending obligations and reduced federal stimulus are placing a heavy burden on budgets.

Imagine the size of the hole in the pockets of these local governments during the past few years as they incurred less revenue from lower property values, and endured cutbacks in federal and state aid. In addition, some states have seen a mass exodus of people, which results in less income tax collection.

Unlike the federal government, states are required by law to balance their budgets. Many states have already addressed nearly $431 billion in gaps from 2009-2011. Fiscal 2012 appears to be one of the toughest on record, as 44 states and the District of Columbia anticipate budget deficits totaling more than $112 billion. To cut deficits, the solution is seemingly simple: Raise revenue (mainly through tax collection) and reduce spending.

And many as cities, counties, schools and other local government offices struggle through this fiscal crisis, many others have been increasingly drawing toward technology as a method to conserve and control spending. One of the fastest-growing sectors in this arena is software firms that provide financial management solutions to the public sector.

Tyler Technologies, Inc. (NYSE:TYL) is one of the leaders in this segment. Its software provides tools foraccounting and financial management of public records and judicial cases, and for automating appraisals and assessments. The company has provided appraisal services and tax software solutions to virtually every public entity in the country. Its expert teams stay in touch with evolving legislation and assessment practices to provide superior service and data to many states across the country.

During the past five years, this stock has averaged annual growth of 25% and I don’t see it slowing down during the next four years. It even managed to stay afloat during the bear market of 2008-2009 and soared thereafter. Take a look at the stock’s performance in the chart below… 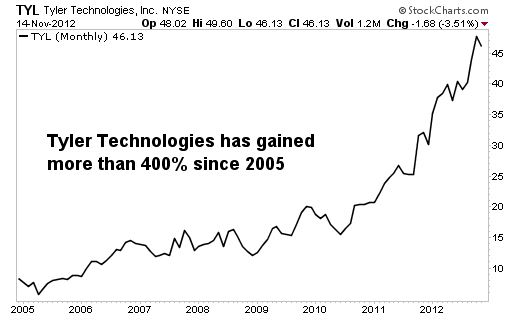 Part of the reason the stock held up so nicely during the Great Recession is because its software services are in high demand, especially during bad economies, when state and local offices need all the revenue they can collect. To date, Tyler Technologies has a total client base of more than 10,000 local government offices, which are distributed throughout all 50 states, Canada, the Caribbean and the United Kingdom. The company recently signed promising contracts, including one with Nevada’s Truckee Meadows Water Authority to provide business management software in collaboration with Microsoft Corporation (NASDAQ:MSFT) through a product called Microsoft Dynamics.

In the past year, revenue grew 21.6% to $93.8 million in comparison with the previous year. Third-quarter earnings exceeded expectations by 18.7%, totaling 33 cents per share. As a result, analysts have increased their price target by almost 19% from $43.50 to $51.60. I see the stock reaching the $60-range due to the fact that it has consistently delivered 20% or higher annualized gains for more than a decade.

Risks to Consider: During the past 90 days, Tyler’s standard deviation has been 1.7, while that of the S&P 500 Index has been only 0.7., showing it has more volatility than the overall market. Additionally, Tyler is in the technology sector, which can see sharper price swings based on economic news.

Action to Take –> Buy Tyler Technologies up to $50 a share. I see this stock hitting $60-$65 during the next 12 months, which would be a nice 40% gain from current levels. With governments of all sizes around the country struggling to find solutions to save money, Tyler Technologies is well positioned to continue to deliver outstanding returns for its shareholders, and is an excellent small-cap option for investors to investigate further.

This article was originally written by Jay Peroni, and posted on StreetAuthority.